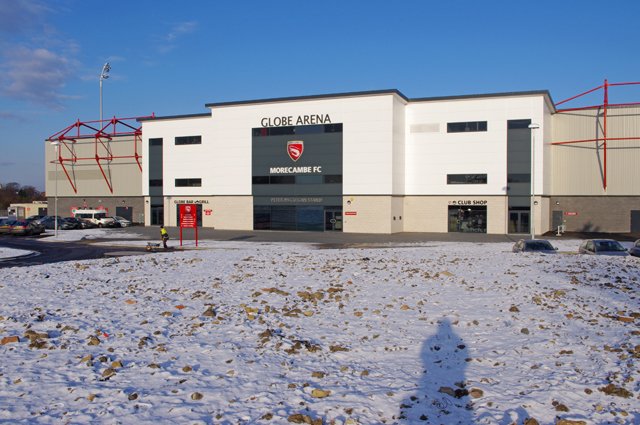 ARGYLE travel to Morecambe in Sky Bet League Two on Saturday and we have your Green Army Guide to the Globe Arena.

The 6,476-capacity ground, the Globe Arena, is home to Morecambe, which is a 660-mile round trip from Home Park, approximately 5 hours and 30 minutes in the car, each way.

The Peter McGuigan Stand, named after the former Club Chairman, is on one side of the stadium, a capacity of just under 2,200 seats and is an all-seated, covered stand which has a box-like feel. There is also a corporate glassed area to the rear.

On the opposite side is the North Terrace which is a small terracing area that’s only a few steps high and is split into two separate parts. The West Terrace holds 2,234 home fans and the East Terrace opposite, which is where the away fans are housed.

In the Bay Radio Terrace (the East Terrace), 1,400 visiting supporters can be housed. However, if needs be, 300 seats can also be made available in the Peter McGuigan Stand, sharing with the home fans.

Nicknamed the "Shrimps" due to the coastal town's local cuisine, Morecambe have always had variations of kits based around red, black and white since 1920. More recently, it’s been red and black. These kits are worn at every home match by their mascot, Christie the Cat.

There is a pub just outside the main entrance to the stadium which is relatively new but also offers parking for £10 before the match, although this can be redeemed against a food purchase. Alternatively, there is another pub just a few minutes walk away in the Regent Leisure Holiday Park.

However, seeing as Morecambe is close to the seafront, it would be silly not to take advantage, especially on a nice day, and to stroll down the waterfront.

Parking at the stadium is only available for permit holders, so it is a case of finding street parking. If you continue along Westgate passing the stadium on your right, then on the other side of the railway bridge there is plenty of street parking to be had in the side roads on either side.