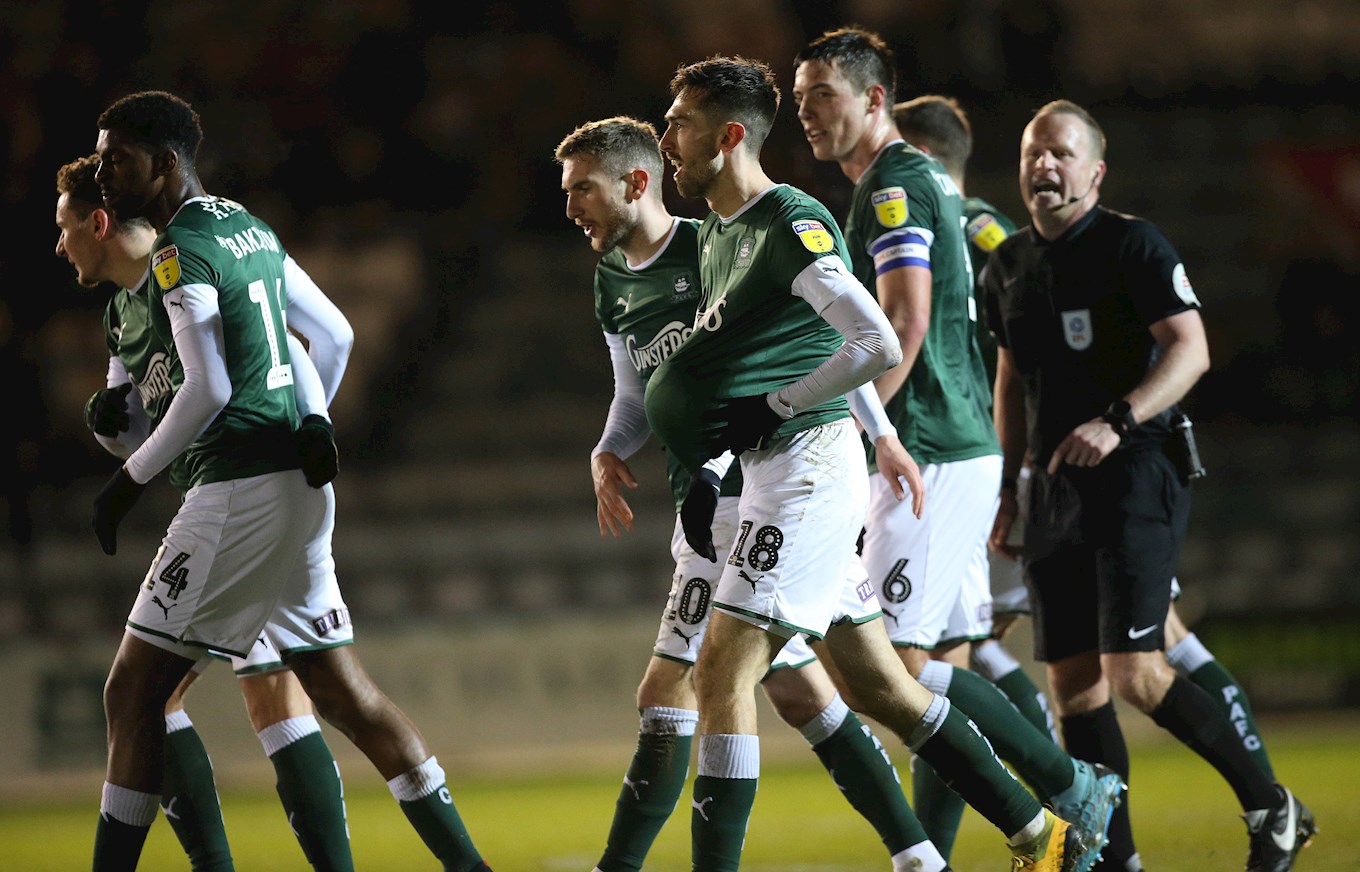 ARGYLE bounced back, after having been bogged down at Bradford, in some style, stamping their Sky Bet League Two promotion credentials all over Grimsby and leapfrogging Exeter City to go into third place in the division.

Three goals to the good at half-time, they had three points sewn up thanks to goals from Tyreeq Bakinson, Ryan Hardie – his sixth as a Pilgrim, but first as a starter – and Luke Jephcott.

It is well-known in football that no two halves are ever the same and, having blasted away their visitors in their 20-minute three-goal first-half blast, Argyle found Grimsby a more resistant opposition after the break.

Nevertheless, they continued to thrill a vocal and delighted Home Park, never more so than when one of their own, Jephcott, smashed a first-time shot against the crossbar.

Argyle’s starting line-up, although showing three changes, carried forward the attacking ethos with which they had left Bradford the previous Saturday.

Hardie, scorer of the Pilgrims’ goal after coming on as substitute in the unlucky 2-1 defeat at the Utilita Energy Stadium, was chosen to partner Jephcott up front, with Byron Moore switching to right wing-back instead of Joe Edwards.

George Cooper was recalled on the opposite midfield flank, allowing Callum McFadzean to move inside and fill for suspended captain Gary Sawyer at left centre-back.

Sawyer was beginning a four-match suspension after being sent off at Bradford, a fate that also befell Antoni Sarcevic, whose two-match ban will be as keenly felt. His absence offered Conor Grant the opportunity to make his tenth start of the season.

Grimsby manager Ian Holloway had promised to make changes to his new charges on his return to his old stomping ground as he prepared the mid-table Mariners for next season, and his selection proved him as good as his word.

The visitors’ much-changed team introduced five players who had not started the 3-0 home defeat to Northampton Town three days earlier and included ex-Pilgrim Billy Clarke, who made 12 appearances for Argyle earlier in the campaign after arriving at Home Park in mid-October.

Grant started like a man on a mission, bursting forward from his central-midfield position before laying the ball off to Jephcott, whose attempt to place to ball past Grimsby goalkeeper James McKeown was only just thwarted by the Mariners’ goalkeeper.

After Cambridge’s recent bus-parking exercise, fears had been raised that other sides would come to Home Park during the run-in with a similar plan to contain, rather than contest. Grimsby, who had conceded eight goals in their previous three matches, never looked remotely like adopting that mentality.

Argyle, then, were free to play with an abandon that so suits their philosophy and talents, surging forward left, right and centre with some menace.

Hardie twice came close to opening the scoring. First, he seized on a Grimsby clearance and, after instinctively adjusting his body shape, sent in a volley that smacked flush against the post, with McKeown beaten.

Then, Cooper picked him out with one of those pinpoint crosses that just would not quite fall for Hardie to be able to get his shot away.

With the Green machine purring sweetly through the gears, the opening goal was only a matter of time and it was not long in coming. Bakinson is not the smallest player ever to have worn the Mayflower badge on his chest, but Cooper was apparently the only person in Home Park to notice him stealing in at the far post and picked him out for his 11th assist of the season.

Bakinson then turned provider, intercepting the ball well inside his own half and immediately releasing Hardie, whose speed of foot matched his team-mate’s quickness of thought, earning him the space to take the ball around McKeown and plant the ball into the net with the aplomb of the natural finisher that he clearly is.

With an hour to play, Argyle appeared already in the comfort zone, and were all the more dangerous for being relaxed.

Conor Grant caressed a beautiful curling shot towards goal that McKeown clawed away from danger at the last second before Jephcott added number three, squeezing the ball home after captain-for-the-day Niall Canavan had headed the ball across goal.

With the goal, the joint tally of Hardie and Jephcott in the 13 games since the latter was recalled from a loan spell at Truro City reached 13 – and Hardie had only been available for 12 of the matches.

Grimsby tweaked things at, and either side of, the interval and looked better for it. Mind you, the game was more than an hour old before Pilgrims’ custodian Alex Palmer was obliged to make a save, from his old team-mate Clarke.

Argyle’s response saw Cooper drive down the wing and, after threatening to shoot, pull the ball back for Hardie, whose first-time tickle towards goal was stopped more by instinct, than planning, by McKeown.

Palmer then saved a powerful downward header from Luke Waterfall, before Jephcott came close to notching a third double of his incredible season, sumptuously volleying against the Devonport end crossbar from 10 yards.

Ryan Lowe’s teams probably do not know the meaning of the word ‘coasting’ but the remainder of the game was played out in a joyous and untroubled atmosphere, on and off the pitch.

McKeown thwarted Hardie – and substitute Edwards cracked the loose ball against the post – but the Mariners’ boat had long since sailed, leaving Argyle’s own Mayflower sitting high in the water.

You feel there is a flood tide coming…