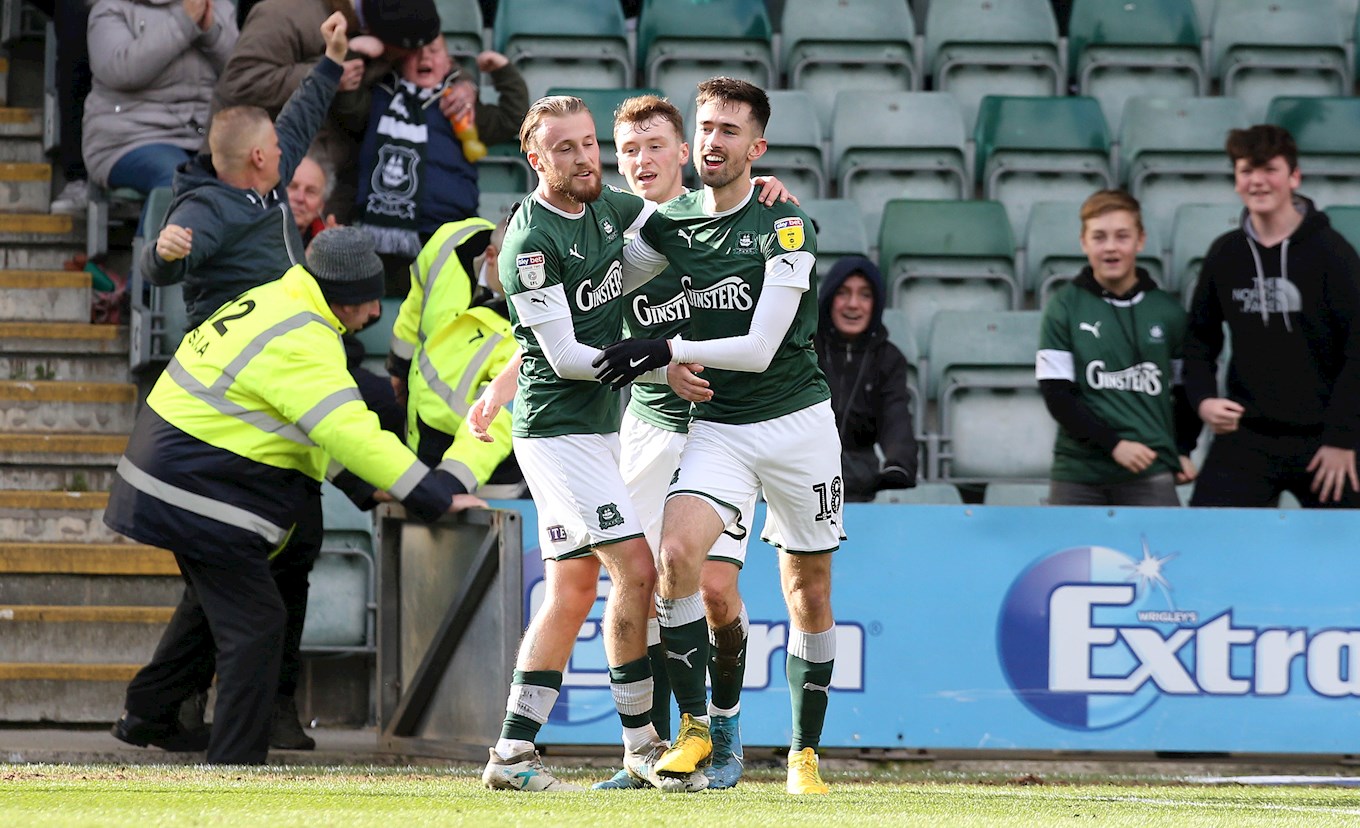 WATCHED by more than 2,000 young fans who represent the Pilgrims' long-term future, the present crop of Greens took another giant stride towards making the short-term outlook very bright with their 12th home win of the season.

On Devon Junior & Minor League Takeover Day, with 2,020 players and their coaches as guests of the club, Ryan Hardie and George Cooper were on target as the Pilgrims maintained their place in the Sky Bet League Two automatic promotion positions.

Hardie opened the scoring in in the first half, netting for the third successive game; Cooper, who had provided the assist for the opener, then added two second-half strikes – after Hardie had been wrongly denied a second of his own – to complete an emphatic victory.

Argyle manager Ryan Lowe had elected to go with the same 11 that started the previous Tuesday’s excellent 3-0 home win over Grimsby Town, again pairing Hardie and Luke Jephcott up front.

With defender Gary Sawyer and midfielder Antoni Sarcevic both still suspended, Cooper and Conor Grant were retained after an impressive display against the Mariners. Sarcevic can return for next weekend’s visit to Morecambe but Sawyer is not available for selection until the Devon Expressway Derby at Home Park Stadium on Monday, March 23.

Defender Will Aimson, who has not played since last October, was included on the substitutes' bench in the only change to the 18 on duty in midweek, replacing Joe Edwards, who was given time off for family reasons.

As Sawyer, Sarcevic and Edwards were all indisposed, the captain’s armband remained on the sleeve of Niall Canavan.

Macclesfield’s starting 11 showed three changes from the one that had lined up against the Pilgrims less than three weeks previously in the teams’ re-arranged fixture at Moss Rose. Notable by his absence from that 1-1 Tuesday night draw was forward Arthur Gnahoua, whose place went to Joe Ironside.

The Silkmen also tweaked their shape from the initial encounter, lining up in a 4-5-1 formation with Jak McCourt protecting the back four, following, maybe, in the footsteps of recent visitors Cambridge United and challenging the Pilgrims to break down the massed ranks of their defence.

The Devonport end, towards which the Pilgrims were attacking in the first half, thought that Argyle had breached the wall in the opening ten minutes, when Jephcott fired home from a semi-supine position after bodies from both sides flew in on Cooper’s inswinging free-kick. However, the ball had hit Jephcott’s hand in transit.

At Moss Rose in mid-February, Macclesfield had retreated into their shell after taking the lead and proved pretty adept at repelling the Pilgrims’ waves of attacks, so Argyle would have been doubly keen not to concede. Ironside was a man to be wary of, and his early header had Pilgrims’ goalkeeper Alex Palmer stretching before the ball clipped the post on its way wide.

The lack of subtlety to Macclesfield’s game-plan was highlighted by some uncompromising challenges and, when Connor Kirby was booked in the 14th minute, it was at least the third such attempted tackle that a referee other than a lenient Chris Sarginson might have deemed worthy of a yellow card.

With Mayor floating around nicely between attack and defence, often on the same left-hand side of the field as Cooper, Argyle were never going to be short of creation and one cross from the Pilgrims’ No.10 was only a tad too high for Tyreeq Bakinson who, after striding up from midfield, could not direct his header on target.

Argyle upped the pressure, attempting to wear down Macclesfield as the first half wore on. Canavan outmuscled his man to get a boot on a Cooper corner, but Macclesfield goalkeeper Jonathan Mitchell flipped the rising ball over the crossbar.

Ironside continued to represent Macclesfield’s best chance of upsetting the formbook – not to mention the 2,000-plus young Pilgrims in attendance – but Palmer was quick to block a shot after the big No.9 had avoided an offside flag.

Cooper then took the game by the scruff of its neck. Receiving the ball in his own half along the left-hand touchline, he drove inside and forward, looked up, and saw Hardie making one of his rapid breaks.

The pass from deep tempted Mitchell to come from his goal, a decision that was immediately rendered foolhardy as Hardie controlled the ball and, from just outside the penalty area, sidestepped the bereft goalkeeper and lobbed the ball into the unguarded net.

The goal immediately relaxed the Pilgrims, who sought to turn their overwhelming superiority of possession into something more. Maybe a little too relaxed in the case of Byron Moore. His imprecise pass back to Palmer was intercepted by Shilow Tracey, whose lack of control in attempting to bypass Palmer cost him any chance of an equaliser.

That small alarm apart, the Pilgrims coasted imperiously into the break. Hardie’s natural goalscoring instincts were well to the fore as he first found ludicrous amounts of space to head a Cooper cross towards goal, only for the ball to hit Jephcott, then flicked wide Bakinson’s delicious short pass towards the near post.

The second half was something of a slow burner that sparked into life when Cooper drove in off the flank and fired in a delivery that was deflected for a corner, whereupon the game burst into flames.

What seemed a lovely set-piece goal - Cooper’s corner; Canavan’s header back across; Hardie's close-in finish – was wrongly not given by Sarginson and his officials, who failed to discern that Mitchell was a full two feet behind the line when he clawed the ball away.

They should have taken a cue from Hardie, who was so convinced that it was a goal that he did not bother to follow up when the ball came back to him.

Piqued, Argyle flooded forward, and Jephcott hit a post after sliding in on Moore’s near-post cross.

The game was then effectively decided within a minute as Argyle showed their mettle at both ends of the field.

First, a rare Macclesfield attack saw Palmer, for once, outmanoeuvred and left Danny Whitehead free to tee up Ironside for what seemed an easy finish. That reckoned without Scott Wootton, whose headed goal-line clearance was out of this world.

Immediately, Argyle rubbed salt in the Silkmen's wounds, Mayor racing forward and reversing a pass into the feet of Cooper, who smashed the ball unequivocally and joyfully past Mitchell before wheeling away to celebrate with 2,020 very happy young fans.

That was effectively that, and Cooper dispelled any lingering hopes that Macclesfield might gain a toehold in the contest when, after collecting Mayor’s pass, he looked for someone to assist, found no takers, checked inside and sent a beautiful curling shot around Mitchell from 20 yards.

Such was the Pilgrims’ control, that Lowe felt able to send on apprentice Jarvis Cleal for his debut in the closing stages.

Further indication that the future – short term and long – is indeed bright.