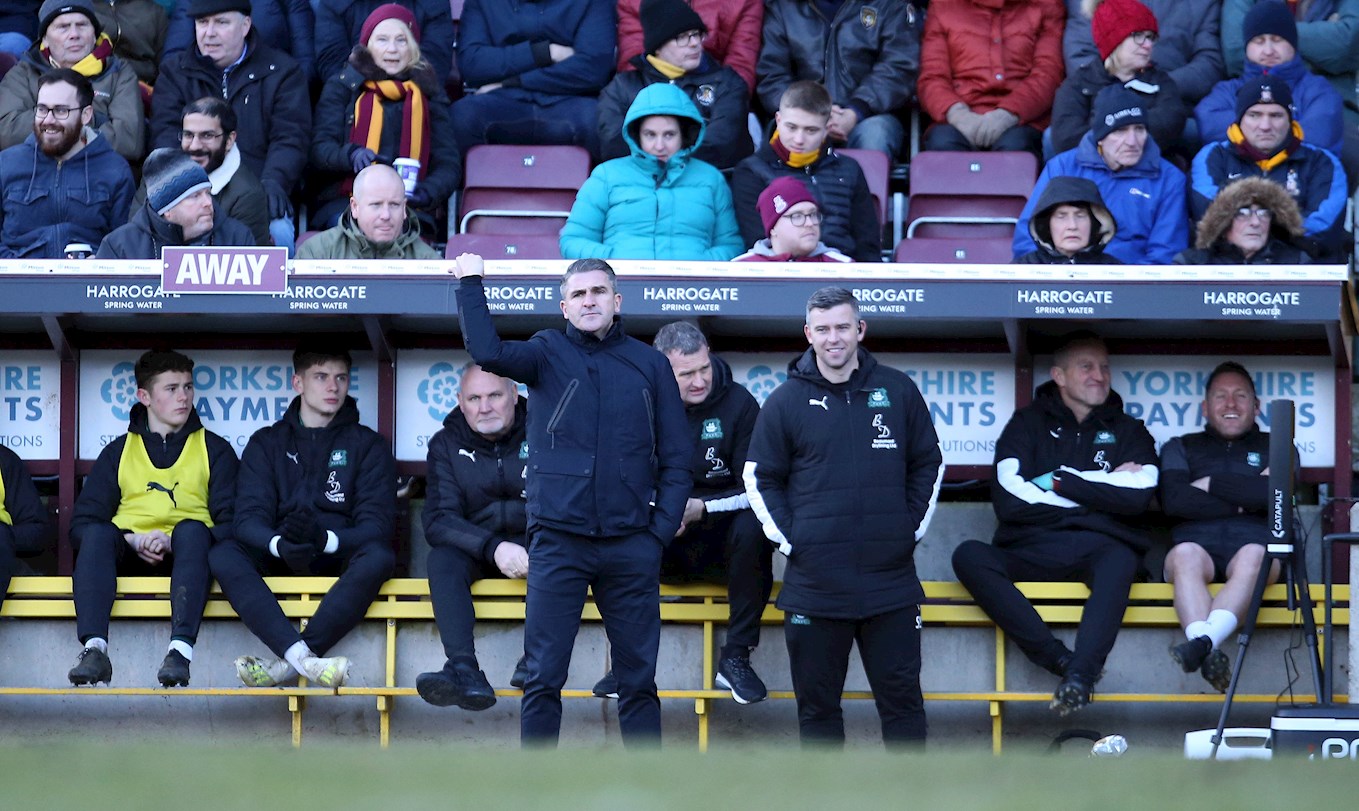 ARGYLE manager Ryan Lowe refused to blame a bad pitch and some unfortunate decisions for the defeat at Bradford in Sky Bet League Two on Saturday.

After conceding an early goal from a corner, the Pilgrims recovered well and tried hard to play their football on an extremely stodgy surface but were then hit by a red card to captain Gary Sawyer, and a great strike from Dylan Connolly making it 2-0 to the hosts at half-time.

The Greens came out fighting after the break and threw everything at Bradford before being reduced to nine men following a second yellow for Antoni Sarcevic. Even with nine men, Ryan Hardie pulled a goal back, but the gaffer is only concerned with getting back on the winning bike.

“We’re overall disappointed, gutted is the right word,” he said. “You come to Bradford and you want to play on a nice pitch, but that wasn’t to be.

“We’re not making excuses but have we been beaten by the better team? Probably not, but we’ve been beaten and we’re disappointed. They had a couple of chances that flashed past the post but so did we.

“When we came in the morning, it probably wasn’t [playable]. The groundsmen have worked their socks off, they’ve got it done. It wasn’t playable to our standards but we wanted the game on, we travelled seven hours yesterday but I’m not making any excuses, we’ve been beaten and we’ve got to get back on the bike, and get riding again.”

Given the state of the playing surface, it would have been understandable for the gaffer to change his possession-based approach, but he learned the lessons from a similar scenario at Bury that different tactics are often not the answer to a muddy question.

The introduction of substitutes Hardie and Ryan Taylor did alter the options for Argyle but, ultimately, the red cards for Sawyer and Sarce were pivotal decisions.

“We did it last year [with Bury] at Newport, tried to change our tactics and got beat, so I was never going to change my tactics again,” said Lowe. “We did change a little in the second half because we felt the ball was coming back too soon and we put Ryan Hardie on to stretch them, and Ryan Taylor was outstanding.

“In terms of tactics, we’re always going to try and play our way. In the first half, there were some good bits but the goal kills you. We found ourselves 1-0 down from a corner and the second one is in the top corner.

“We were 2-0 down and felt we had to go again. If we conceded another, it’s still the same three points that you’re losing. We’ve had a right good go in the second half.

“I’m disappointed in the first red card but I’ll have to analyse it properly. The kid has made a meal of it, the ball died a little and it is what it is. We will have a look at it.

“He [Sarce] has got the ball. He knows he’s been booked but he was the captain, the leader, he had the armband on at the time and he was frustrated with what was going on. The decisions that were made are down to the referee.”