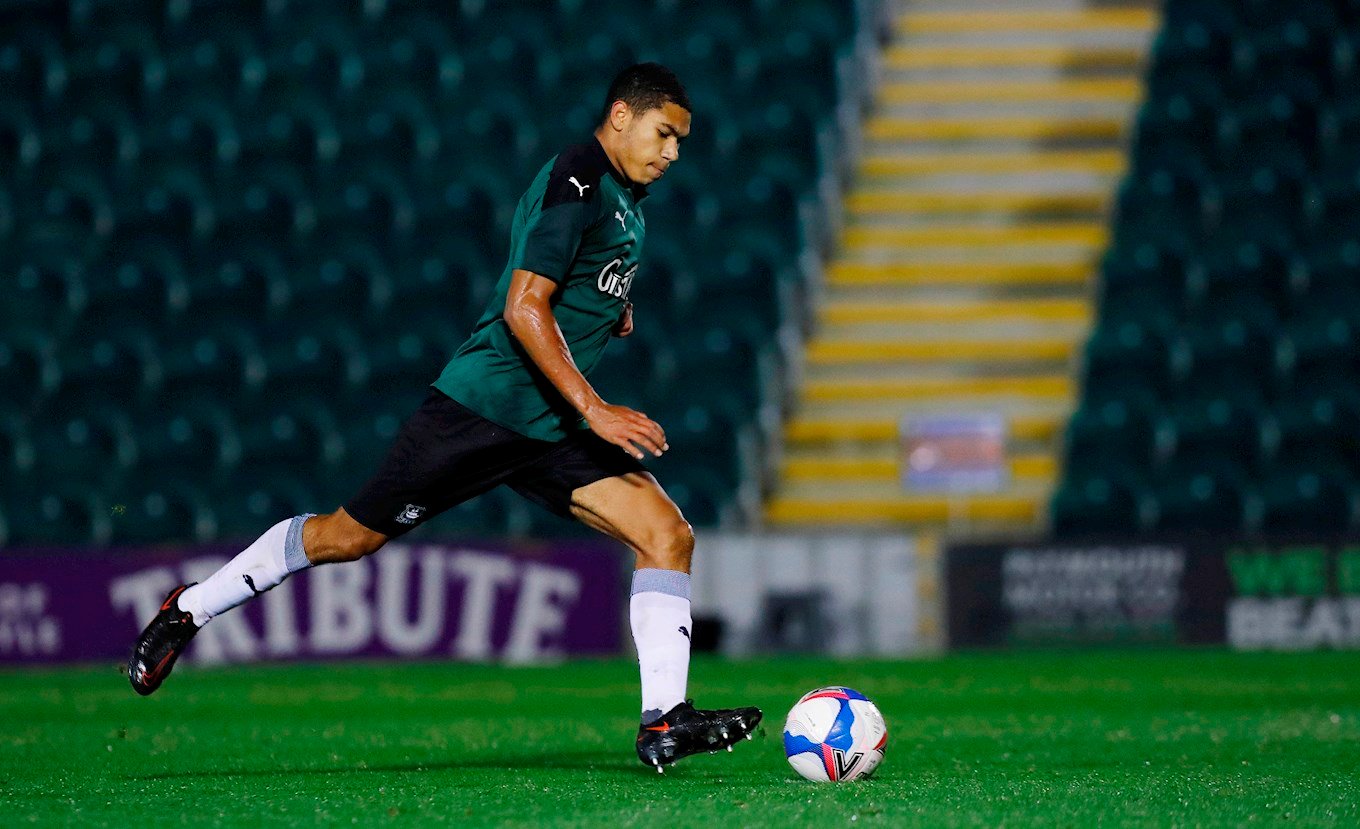 After 120 minutes of high-octane football, the next generation of Argyle talent fell narrowly short against Exeter City in the FA Youth Cup first-round at Home Park.

The Greens had hauled themselves level twice during a topsy-turvy opening 90 minutes, with Scott Crocker and Charlie Miller keeping their cool from the spot, but they were unable to find a third-such leveller to cancel out Joe Wragg’s 104th-minute winner.

Much has changed since the class of 2019/20 lost out to the Grecians at the same stage of last year’s competition, with the Pilgrims’ Academy being placed as a key piece of the club’s long-term plans, undergoing a significant restructure under the guidance of Director of Football Neil Dewsnip.

Part of that restructure included the acquisition of experienced coach Darren Way, formerly first-team manager at Yeovil Town, to lead the Greens’ under-18 group. Although his tenure has only been a few short months, early signs are encouraging, with the young Pilgrims more than holding their own in the EFL Youth Alliance competition this season.

The Greens began with purpose, and midfielder Miller, who netted in the senior side’s pre-season win over Plymouth Parkway on the same pitch a few months previous, sent wing-back Oscar Rutherford rampaging down the right. Rutherford showed no shortage of pace and skill to burn past his marker, before pulling back low from the dead-ball line, but his cross was cleared.

Moments later, the visitors grabbed a lead through a not dissimilar move, as Nelson Iseguan found room down the left to deliver a low cross to Sonny Cox at the near post, who guided his effort in the far corner, past the dive of Pilgrim stopper Lewis Moyle.

To their credit, and perhaps epitomising the club-wide philosophy, the Pilgrims stuck to their principles of playing out from the back despite the early setback, and they drew level midway through the half after a slick counter-attacking move.

Rhys Shirley’s excellent flick-on sent his strike partner, Crocker, on a chase in behind, and he beat his marker to the ball before surging towards the box. The pacey striker made a direct run on goal, before being floored by a late Ellis Johnson challenge.

Having earned the penalty, Scott picked himself up, took two short steps, and sent the goalkeeper the wrong way to pull the Greens back onto terms.

Argyle visibly grown in confidence after the equaliser, with passing moves gaining extra zip and poise on a pristine Home Park surface. At the other end, though, goalscorer Cox was keeping the Pilgrims’ back three honest, and he generated a chance out of nothing with quick feet inside the box, before firing over Moyle’s crossbar.

The Pilgrims nearly made the Grecians pay for the miss just seconds later, as Crocker’s outrageous dummy from Oscar Halls’ through ball bought some space to wheel away down the right. Having reached the edge of the box, he curled a low cross intended for Shirley, but it skidded behind its intended recipient, instead finding Welsh youth international Will Jenkins-Davies at the back post, the midfielder’s drive parried by City stopper Jack Arthur.

With the last meaningful action of the half, Crocker’s quick thinking secured possession on the edge of the City area, before teeing up Jeremiah Medine, who shrugged off a foul 20 yards from goal and striking straight at Arthur.

The interval came at the right time for City, who weathered Argyle’s best spell of the game before regrouping in the sanctuary of the temporary dressing rooms under the Barn Park stand. Minutes after the restart, they had fired themselves back in front.

An excellent in-swinging free-kick from captain Jack Veale was met by Toby Nevile at the near post, who timed his run well before guiding a first-time effort beyond Moyle.

Way in the Argyle dug-out responded by injecting the fresh legs of Jamal Salawu up front, replacing Shirley, who put in an hour’s hard graft as the foil for Crocker in the Greens’ forward line.

As they had in the first-half, Argyle responded courageously after falling behind, with Rutherford, in particular, looking to barge his way through with a series of energetic runs down the right flank.

The Pilgrims continued to press in search of parity, but City’s defence stood firm in the face of a number of crosses from deep and set-plays, and looked to be too tough of a nut to crack with the clock ticking town.

However, the Greens’ perseverance paid off. A partially-cleared corner worked its way to Crocker on the edge of the area, and his hopeful cut-back into the box was handled by Nevile.

On this occasion, Miller, rather than Crocker, stepped up to take the spot-kick, but the result was no different – the Pilgrims’ no.7 sending Arthur the wrong way to bring the Pilgrims back to terms five minutes from time.

With minds turning towards the task of extra-time, substitute Salawu very nearly snatched a dramatic winner for the Greens, as his fresh legs sent him beyond a tiring City back-line, but he pulled his effort wide of the far post from a tight angle.

The opening skirmishes of extra-time were played out in a fairly low-key fashion, with both sides tiring after a frenetic 90 minutes. With just two minutes left of the first period, though, the game sprung back into life.

Veale’s corner for the visitors was met by the leap of substitute Charlie Hanson, but his header rebounded off the crossbar. The second wave of the attack, though, was not quite so fortunate, as Iseguan’s inch-perfect left-wing cross was met by substitute Joe Wragg at the far post, who turned home.

The young Pilgrims delved deep into themselves again to try and force a way level, and half-time substitute Oscar Massey made an immediate impact in the right channel, chasing a through ball into the box before seeing his low effort deflected into the side netting. From the resultant corner, Miller’s low drive from 20 yards was parried to safety.

With less than 60 seconds remaining on the clock, Crocker, who had not stopped running all night, threaded a ball into Massey in the box, but his goal-bound effort was blocked by a last-ditch City block.