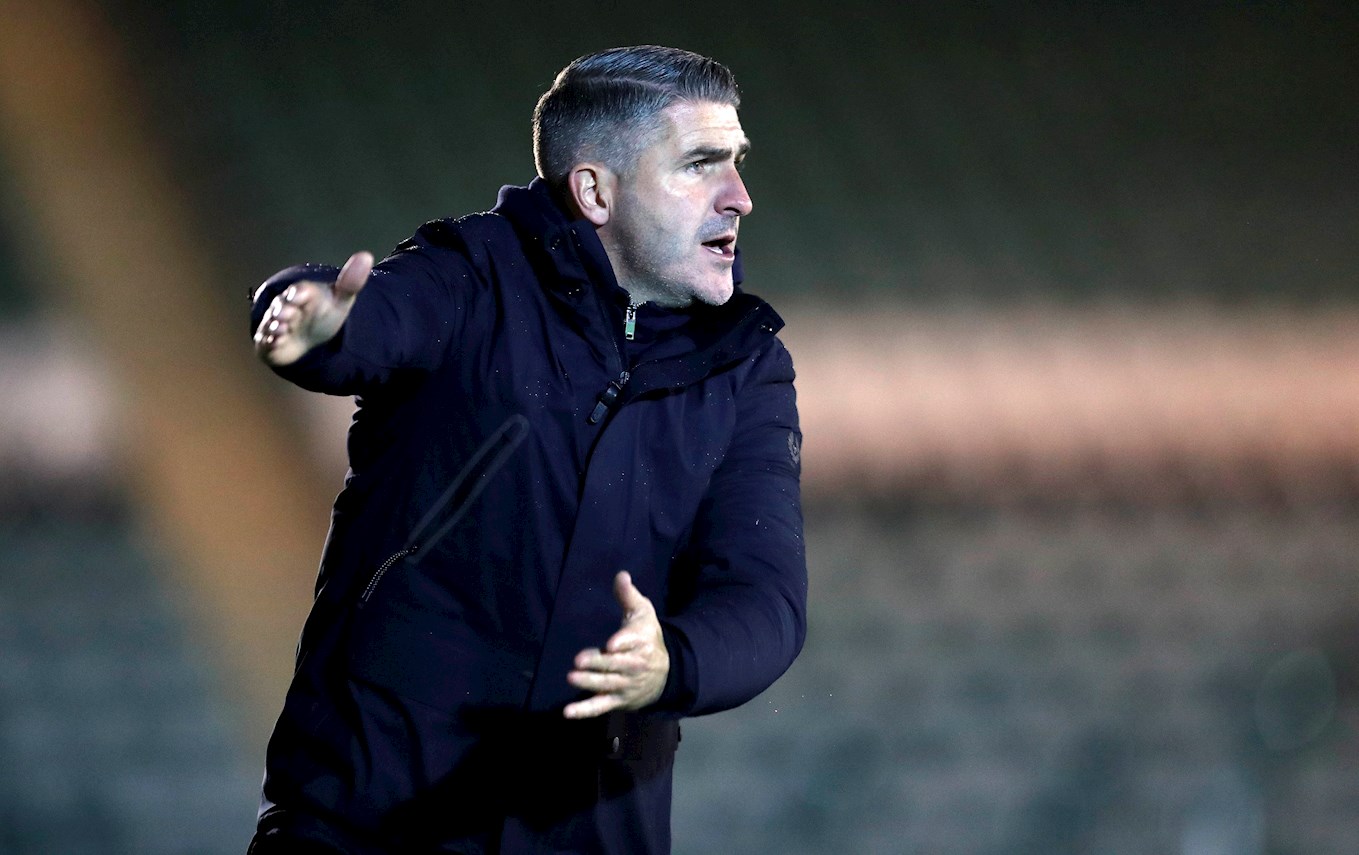 Argyle manager Ryan Lowe was delighted with the way his players saw out their 4-2 victory over Swindon Town in Sky Bet League One action on Tuesday night.

After a frenetic first period in which the sides split five goals, Argyle held a one-goal and one-man advantage over the Robins at the interval, and a professional second-half display secured all three points at Home Park.

Lowe said: “They’re a good team, Swindon, they play some good football, and their goals were great, along with ours. But the energy of the lads to make sure that we don’t lose games of football is different class.

“We have come away with three points, we’ve conceded two goals, but I think that’s the first time that a team has really opened us up a little bit. We’ll analyse it, because we don’t want that to happen again, but you have to give credit to Swindon, they played some good football.

“I thought we were clinical as well, 23 shots, 11 on target, their keeper’s made a few good saves. I did, at one point, think we could go on and get five or six, because we certainly had the chances, nevertheless, it’s three points and we’re happy.”

Having raced to a two-goal lead inside the opening ten minutes, through Luke Jephcott and Joe Edwards, the Pilgrims were pegged back to 2-2, before Jephcott converted his second of the game, and fifth of the season, to send the Greens back in front.

Matters were made worse for Swindon on the stroke of half-time, when Jonny Smith saw a second yellow for dissent, which left the visitors with no choice but to sit deep in the second period.

The Pilgrims displayed excellent game management qualities in a wholly different second term to give Swindon no chance of a late fightback, before killing the game off late on.

Lowe said: “We were hanging in for that fourth to make it a bit more comfortable, but I thought we saw the second-half out sublimely. They were down to ten men, but they still had runners in behind, and I thought it was an excellent performance all-round.

“I enjoyed it when we were 2-0, but then it went to 2-2, and 3-2. We’ve got a lot of youngsters in the team, but they’re all learning. It’s not one for the faint hearted, when you know you’re playing against a good team. Teams that come here and play, and have a good go, I have got full admiration for, and Swindon did.

“We were in charge, but you still have to be careful, when they bring Brett Pitman on, and they’ve still got a threat. I thought Jerome [Opoku] was magnificent at the back, Coops has made one or two good saves. We didn’t need a fourth.”

Despite the Pilgrims’ relative comfort, the fourth did come late on, with half-time substitute Conor Grant dispatching a sensational free-kick from the best part of 30 yards.

Speaking on the Pilgrims’ set-piece prowess, Lowe said: “In training, the lads were on fire. I think that distance was right for Con, every one that Conor’s taken [this season] is a bit short, he just skims the bar. But no-one was saving that, it was right in the top bin!”

The midfielder marked his competitive return from a spell of COVID-19 isolation with another stunning goal, but it is credit to the form of the rest of the Pilgrims’ squad that he has had to be patient for an opportunity to return action.

Speaking on the strength and depth in the Pilgrims’ squad, Lowe said: “That’s credit to them. Scotty [Wootton] and Timmy [Abraham] have missed out today, along with [Klaidi] Lolos and [Ryan] Law.

“That’s tough, it’s never personal, it’s just the decision I have to make. Sometimes, I plan my subs before the game. We didn’t need two defenders on the bench, we didn’t need three strikers. That’s the way it is – we’ve got a great squad. That’s probably what I get paid for, to make those decisions.”

The Pilgrims’ victory over Swindon Town leaves their home record at five wins and one draw from their opening six Sky Bet League One matches, as the Greens head on the road to Charlton Athletic for Emirates FA Cup action.

Lowe said: “We want to be hard to beat at home, and hopefully we can continue for a long period of time, but I think the football and the style is very good.

“We can’t get any bums off seats at the moment because no-one’s here! All we can do is keep putting plans together, keep training the boys, and if they keep putting performances like that on the pitch, then we’ll be fine.”