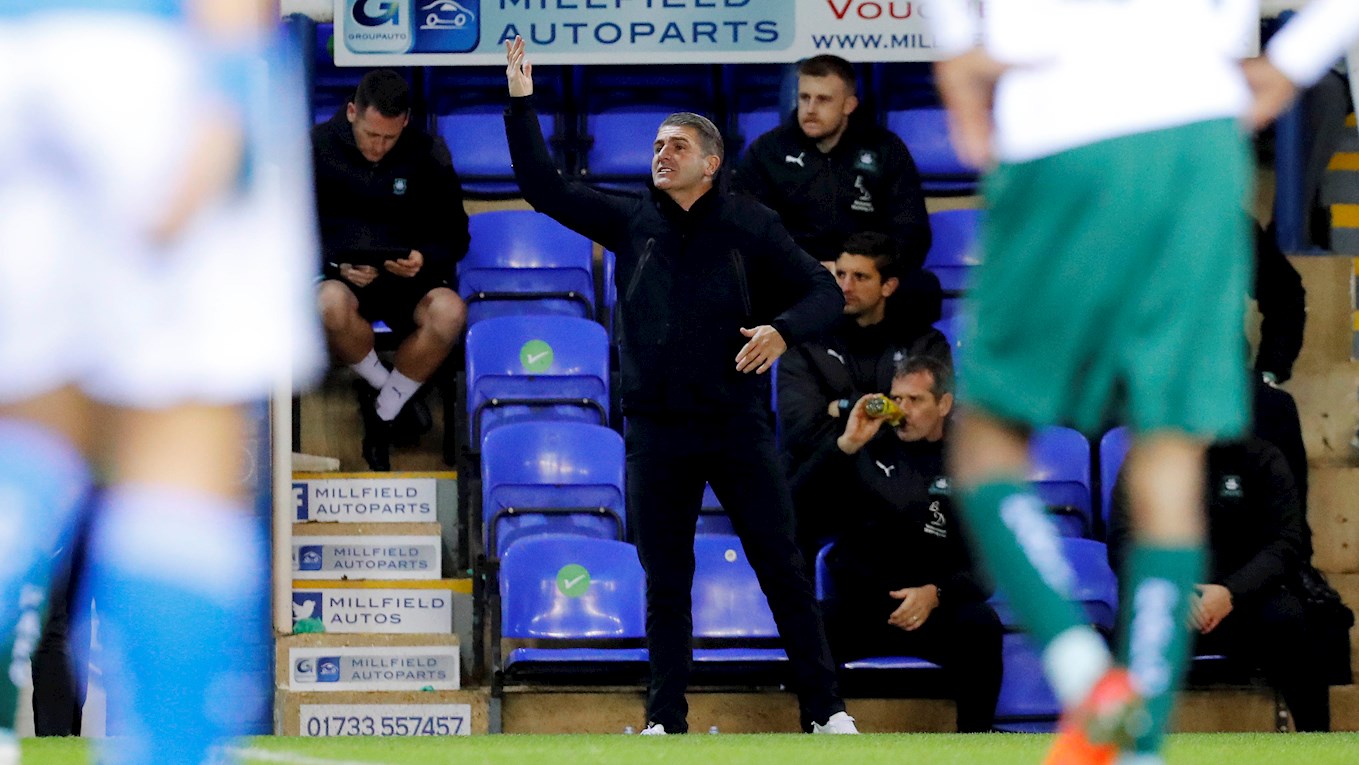 Argyle manager Ryan Lowe was full of nothing but praise for his team, despite falling to a narrow 1-0 defeat away at promotion-chasing Peterborough United on Tuesday night.

Lowe said: “I’m immensely proud of all the boys from what they went through Saturday to the performance [tonight].

“I’m disappointed we couldn’t get a point, but proud of the reaction of the boys from Saturday. They had a tough time at the weekend. I wanted a reaction from them, and they certainly gave me that tonight, they just didn’t get the result we wanted.”

Having suffered a heavy loss at Fleetwood Town on the weekend, the Greens looked to be heading into the break on level terms with at the Weston Homes Stadium, but a moment of quality from danger-man Siriki Dembele opened up the Greens’ disciplined defensive unit, allowing top-scorer Jonson Clarke-Harris to power home.

Lowe said: “Dembele caused us a few problems all night, but we also dealt with them.

“The moment of his brilliance coming inside, we wanted to take him down the line, and it was a nice little link into Clarke-Harris who’s smashed the ball and took the leather off it, that’s that little bit of ruthless edge he’s got.

“I felt for the boys conceding on forty-one minutes, because you’ve got a couple minutes towards half time and you get into a different team talk.”

As the game wore on, Argyle grew in confidence and composure, pinning the Posh back into their own half in search of a leveller that did not quite materialise.

Lowe said: “Did we have some chances to potentially score? Yes, we certainly did, but overall, I’m pleased with the attitude and the commitment of the boys. The result’s hurting because you don’t want to lose any games, especially two on the bounce, but we can get back to the training ground now.”

Despite the defeat, Lowe remained upbeat about his side’s performance, choosing to praise the group’s attitude, determination, and desire to fight for a result against one of the division’s most-fancied sides.

He said: “They’re disappointed but I’ve said I am proud of every single one of them because of the attitude they showed.

“When those lads go out and put that shirt on, they do it for everyone. They’re good lads, they’re a good group, we are in a bigger league than we were last season with better players and better teams, but we are finding out feet.

“We’ve come to Peterborough and we’ve gone toe-to-toe with a team who will finish in the top three, certainly, this season.”

After two long trips in a matter of days, the Greens return to the comforts of Home Park for three successive home fixtures, beginning with an Emirates FA Cup tie against Lincoln City on Saturday.

Lowe said: “We look forward to it, it’s a break in the league for us, against a tough opposition in Lincoln on Saturday and then it’ll be back-to-back games at home in the league.

“We know what we need to do, we know we need pick points up but if our lads keep showing a commitment and desire the way they did [against Peterborough], and play the football we want them to, we’ll be fine.”