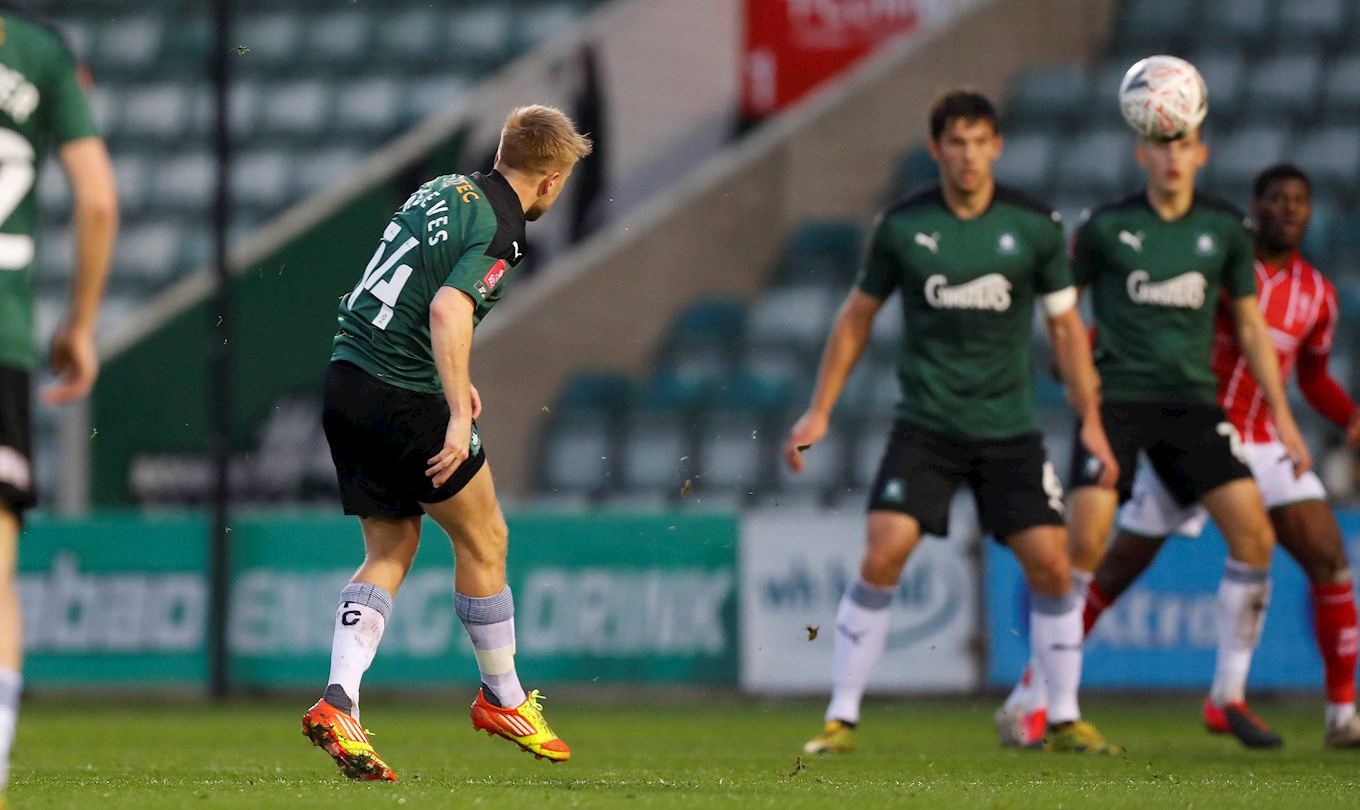 Argyle improved and impressed against Lincoln City to advance to the third round of the Emirates FA Cup.

A goal in each half gave Argyle a 2-0 victory to mirror their defeat at Lincoln City in the league eight weeks ago, but the halves were very different.

Despite going ahead via Luke Jephcott after five minutes, The Pilgrims did not control the first half as well as they would have liked, with The Imps dominating possession, although never impinging or impacting on Argyle.

In the second period, Ryan Lowe implored his team forward, and an impudent second goal by Ben Reeves made a Lincoln recovery improbable, and eventually impossible.

Argyle made three changes for the tie, with Frank Nouble, Ben Reeves and Niall Canavan coming into the starting line-up, at the expense of Ryan Hardie, Danny Mayor and Jerome Opoku. Hardie and Opoku occupied spaces on the bench, while Mayor was out of the 18 altogether.

Lincoln’s team contained only five players that started their most recent league success, a 1-0 win at Swindon on Tuesday night which lifted The Imps to third place in Sky Bet League One.

In a similar manner to the last visitors to Home Park, Lincoln provided, on paper, the equivalent to the old irresistible force meeting the immovable object. Attempting to topple Argyle on their impenetrable Home Park perch, they brought with them an impressive tally of 14 points from seven games on their travels, with only a solitary loss at Doncaster blotting their away-day scrapbook. Add to that a three-from-three record in away games in cup competitions, it seemed Lincoln were content at leaving their pleasant cathedral city.

And then Luke Jephcott scored after five minutes and suddenly the flat landscape of Lincolnshire seemed a long way away. Which, in fairness, it is.

Lincoln had started well enough, engineering a half-chance that forward Anthony Scully hit tamely over the bar, before Argyle had a free-kick which defender Kell Watts got a looping header to. Alex Palmer, who performed so admirably as an Argyle loan player last season, did what appeared to be the safe option, punching away for a corner.

From the corner, George Cooper and Jephcott did what they do so well. Cooper whistled in a hard-to-defend left-footed corner from the right wing, and Jephcott’s canny, and indeed uncanny, habit of getting in front of a defender proved vital for the eighth time this season. His instinctive effort was past Palmer before you could spell ‘born in Aberystwyth, made in Ponsanooth’.

Lincoln looked to answer quickly, and fashioned a chance down the right flank. Scully got the ball to captain Harry Anderson, and his powerful shot was well-parried by Michael Cooper. It very nearly, though, cannoned off the oncoming Brennan Johnson, who was sniffing for the loose ball.

Jephcott was nearly a pest again for Lincoln, looking to dart in behind as Joe Edwards’ through-ball was misjudged by centre-back TJ Eyoma, but the buzzing Wales Under-21 man was just unable to beat old confederate Palmer to the ball.

There is no accident about Lincoln’s ascent to their lofty league position, and they continued to press for a way into the match. Had Max Melbourne’s cross not been so close to Mike Cooper then the two Imps arriving at the far post might have pounced.

Shortly afterwards, Melbourne was a footstep away from Conor Grant, who was making an incisive run forward, and Melbourne’s decision to cynically stop Grant’s progress drew the game’s first yellow card.

On top of Lincoln getting a little on top – though admittedly showing no cutting edge to this point – a worry for Argyle came in the shape of their physio spending a couple of minutes treating Mike Cooper for an apparent knee problem. He continued, though, so no call to the bench for Luke McCormick to make another appearance in a cup he first played in a little over 17 years ago.

Lincoln kept up a modicum of pressure, but Anderson’s low effort was easily saved by Cooper, while Tayo Edun slipped on shooting to hit one plenty wide. Then Anderson’s cross looked dangerous, but a perfect piece of full-back covering by Joe Edwards saw him head the ball clear while getting clattered at the same time.

Perhaps the visitors’ best chance of all came as right-back Robbie Gotts hit a shot from range that Cooper saved, although the bounce right in front of him made it impossible to hold. The ball fell to Scully, but all in green were grateful that the Imps’ forward could not shift the ball from under his feet, and Cooper managed to dive upon it.

And thus concluded a first half which Argyle had led almost throughout, never looked in control of, but then never truly been threatened until the very end.

Argyle had a chance, early in the second half, to score even earlier than they had in the first period. Edwards won the ball just inside Argyle territory, and strode forward purposefully. When the time was right, he played the ball left, to Frank Nouble. The big man took perhaps a nanosecond too long to get the ball under control, but he still managed to fire in a powerful left-footed effort which Palmer did very well to save.

A couple of minutes later, after a period of prolonged Pilgrim possession, Grant’s left-footed curler from the edge of the penalty area was beyond Palmer, but was not quite drawing back enough to slide inside the post.

Nine minutes after the restart – nine minutes which had taken place in Lincoln’s half – a loose tackle by Joe Walsh was the catalyst for a flurry of cautions. Walsh, for his reckless foul on Tyrese Fornah, was given a yellow, while Niall Canavan and Lincoln’s Brennan Johnson also went into the book because of some raised tempers after the fact.

From the free-kick, Lincoln partially cleared, as far as Nouble, who lofted a ball to the edge of the area – you can decide, when viewing on iFollow Argyle, if it was perfectly flighted, or a shade off the shin. Either way, what followed was a thing of precise beauty.

The ball arched to Reeves, just over 20 yards from goal, and the midfielder struck the dropping ball with precision, power and grace. The ball found the top corner – and our hearts. Next month, when you are eating your festive snacks, take the sweetest of nuts that you taste, and believe it when we say Ben Reeves’ finish was far sweeter.

Reeves went close with another low effort shortly afterwards, and Argyle looked a team transformed. They now not only had the lead, but total control.

Lincoln boss Michael Appleton’s answer to that was the introduction of top goalscorer Jorge Grant for Walsh, and suddenly Lincoln had some momentum again. Fornah did well to cut out a dangerous ball in the area, although his intervention sent the ball only just wide of the goal. Cooper then showed brilliant hands to grasp a heavily deflected cross by Jorge Grant, before Anderson stung Cooper’s palms with a near-post effort that the Argyle number one pushed around the post well.

Argyle were still looking for the killer goal, though, and Reeves again, presented with a chance by Edwards, hit a deflected effort wide.

Lincoln brought on Jamie Jones in midfield, with Argyle countering with the introduction of Panutche Camara for Conor Grant. Jones got in the game quickly, curling an effort from distance over, although Cooper looked unflustered by the strike.

Late on, Frank Nouble and substitute Ryan Hardie both missed chances to kill the game for sure, and Cooper made another solid save to keep the sheet clean.

In the end, Argyle saw the game out as they implemented an important game plan, and Home Park remains impregnable.

The Greens’ win means they advance to round three of the famous old cup for the first time since 2016-17, which led to two close games with Jurgen Klopp’s plucky Merseysiders, Liverpool.