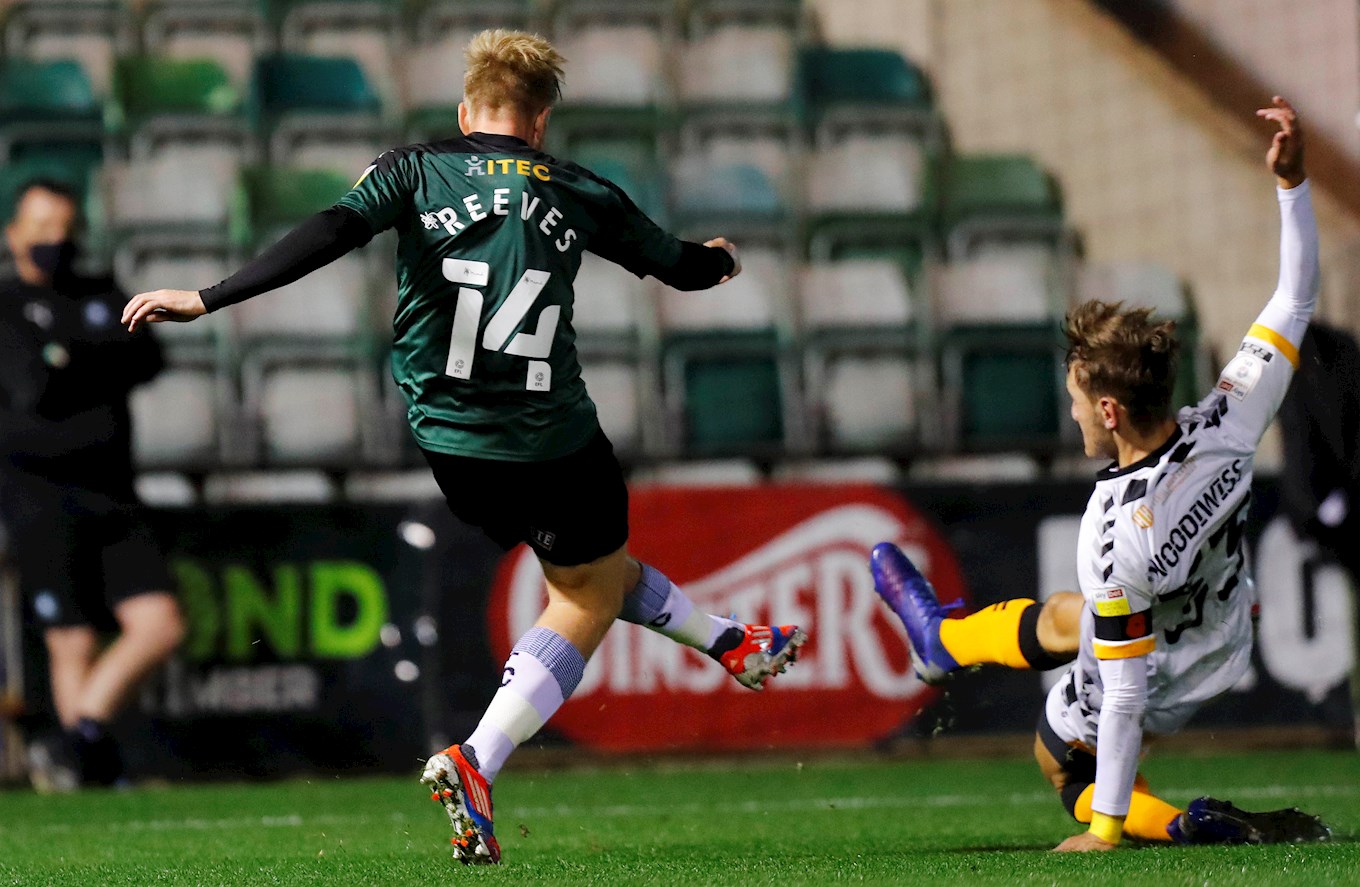 A confident Argyle display was too much for Newport County in a 3-1 victory for the Pilgrims in the Papa John’s Trophy at Home Park.

Ben Reeves scored the only goal of a dominant first period and two goals conjured up by George Cooper - one deflected into his own net by Joe Woodiwiss - sealed the home victory before the hour-mark.

Newport did grab a consolation through Padraig Amond but a pleasing evening for Argyle was made particularly sweet by four scholars on the pitch as the final whistle sounded.

Argyle boss Ryan Lowe took the opportunity to rotate his squad after the excellent 1-0 win at Charlton Athletic in the FA Cup on Saturday and it was a long-awaited return to the Pilgrims for goalkeeper Luke McCormick, the club legend who rejoined in the summer and now on his way back from injury.

Dom Telford partnered Timmy Abraham in attack, and there was more Academy presence on the bench, with apprentices Finley Craske, Ethan Mitchell and Scott Crocker all given their chance in the squad.

Newport manager Michael Flynn made nine changes from the weekend but still fielded a side that contained the vast experience of Kevin Ellison and striker Amond.

County have enjoyed a terrific start to the season and arrived at Home Park as the leaders in Sky Bet League Two, but it was all about Argyle in the opening minute, as a clipped cross from Wootton fell to Law for a volley turned over by teenage goalkeeper Callum Brain.

The Greens won two more corners in the opening stages before settling into a period of calm possession, with the passing assurance of Grant and Reeves in the engine room.

Nouble, meanwhile, was operating more from the left, although it was his young comrade Law who nearly got on the end of a whipped cross from Cooper, enjoying his chance to cut in from the opposite flank.

Newport mustered their first effort through Scott Twine but he dragged his shot wide of McCormick’s far post and Argyle were soon breaking up the other end, with Abraham flashing a drive over the bar from 22 yards.

The football remained neat and tidy from the Pilgrims as the game approached the half-hour but it was a game lacking clear-cut chances, a point exemplified by a speculative Twine long-ranger easily gathered by McCormick on the bounce.

Argyle decided the time was ripe to increase the tempo and it led to an opening goal, with Abraham neatly laying the ball into the path of Reeves for a fierce drive that skimmed off the palms of Brain and into the Newport net.

It was a deserved opener for the Pilgrims and Abraham was soon dancing inside from the right for a clever pass to Cooper, who scooped his effort over the bar from 16 yards.

Argyle were turning on the style and a sumptuous ball from Grant released Nouble to win another corner, which was worked back to Cooper for a whipped cross punched clear by Brain.

Newport managed to conjure their best moment via a run from Lewys Twamle and he cut the ball back to Ellison for prodded effort that bounced off the near-post before being hacked clear.

The Pilgrims completed a controlled first period with a delightful attempted lob from Reeves that drifted inches wide and Argyle were 2-0 up within three minutes of the restart, when a Cooper cross flicked off the head of Woodiwiss to totally deceive the stranded Brain.

The pressure continued on the visiting defence, with Cooper causing all manner of concern with his jinks inside and dangerous left-footed delivery. Abraham was next to test Brain with a low effort comfortably saved by the young custodian.

Argyle were weaving a lovely web in midfield and posing a difficult challenge for the visitors, who almost inevitably succumbed to a third, beautifully worked from the Greens and culminating in a drilled low cross Abraham that was stroked home by Cooper.

Newport did find some joy from a quick free-kick and a threaded pass to Amond, who displayed all his natural instincts with a cool finish into the bottom corner.

Argyle made their first change of the evening and a special night for Academy striker Scott Crocker, given his first senior outing in place of Nouble.

Crocker was soon involved, trying his luck from distance with a decent effort and then feeding a pass to Grant for a right-footer sent flashing narrowly wide from distance.

It was a final contribution for Grant, who was replaced by Finley Craske and another Academy prospect given his opportunity on the big stage, swiftly followed by Ethan Mitchell coming on for Canavan.

It all added up to four Academy players on the pitch for Argyle and a fabulous indication of the trust in youth that is central to the Lowe philosophy.

The Pilgrim youngsters settled in with admirable confidence and Argyle were able to cruise through to a satisfactory conclusion in their latest Papa John’s Trophy journey.