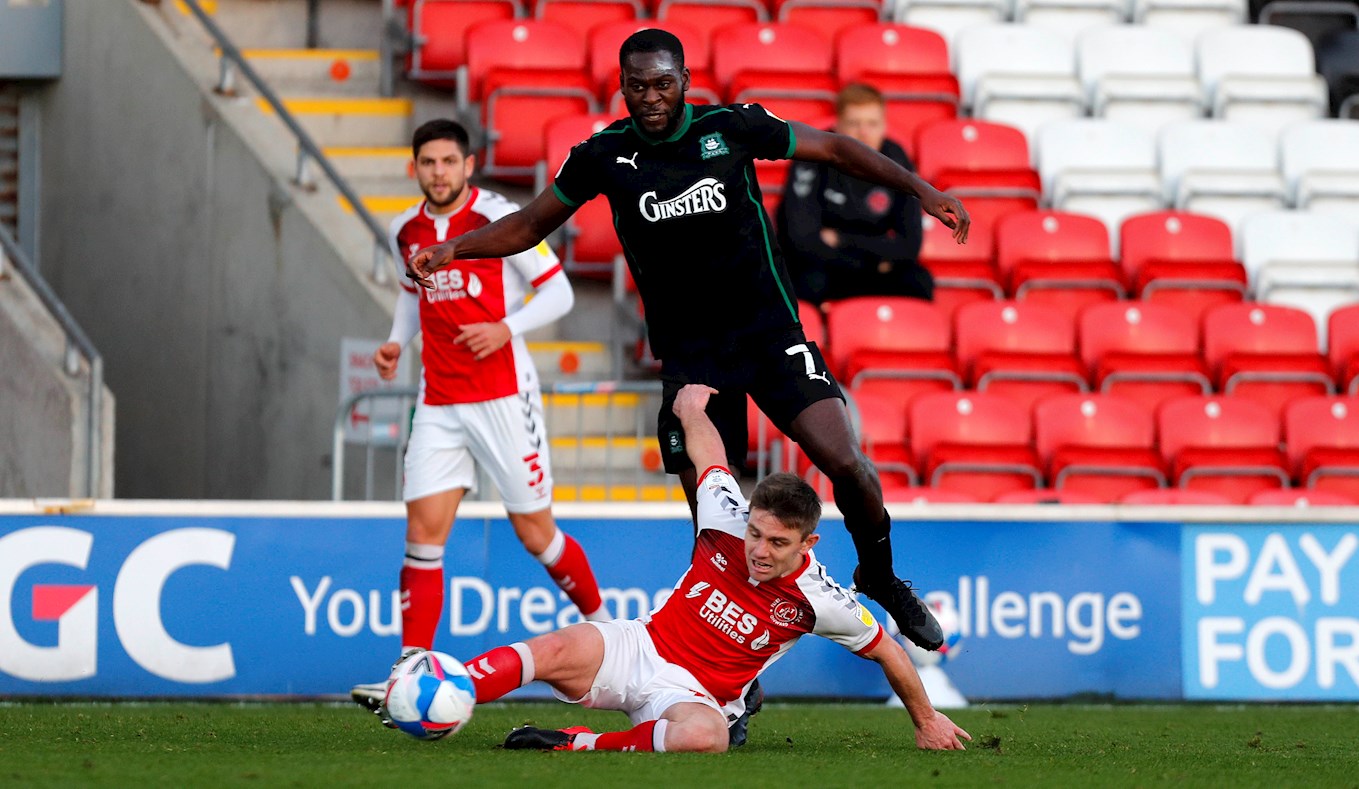 Argyle endured a very tough day in going down to a heavy defeat at Fleetwood Town in Sky Bet League One.

The Greens were 2-0 behind within seven minutes, as Sam Finley and Callum Camps both punished sloppy defending, and Wes Burns increased the home lead before half-time.

Fleetwood added a fourth through Charlie Mulgrew 10 minutes after the restart and Camps rubbed salt into the wound with a fine strike midway through the second period. Luke Jephcott did manage a late consolation for the Pilgrims.

Argyle manager Ryan Lowe made three changes to the side that started Monday’s entertaining 2-2 draw with Portsmouth at Home Park.

Dom Telford came in for Ryan Hardie to partner Frank Nouble in attack, Byron Moore replaced George Cooper at left wing-back and Conor Grant took over from Tyrese Fornah in midfield. There was a return to the bench for Jephcott after his spell on international duty.

Fleetwood boss Joey Barton made just one change from the excellent 4-1 triumph at Bristol Rovers last weekend, with Jordan Rossiter preferred to Paul Coutts in the engine room. The home bench came packed with experience, including the likes of striker Ched Evans and veteran midfielder Glenn Whelan.

Danny Mayor was in the thick of things inside the first two minutes, slipping a pass down the left to Moore for a low cross and Telford was lurking at the near post before home captain Callum Connolly scrambled the ball clear.

Fleetwood responded with the opening goal and it was all down to the work of Finley, pinching the ball in midfield and firing in a shot from 20 yards that deflected agonisingly beyond the reach of Mike Cooper.

The start sadly got worse for the Greens with a second goal conceded on seven minutes, as an innocuous ball forward was flicked on by Paddy Madden and Camps was able to skip around the stranded Cooper to slot into the empty net.

It was a massive test of character for the Greens and they immediately set about the task with a sweeping pass from Telford to Mayor, who jinked inside for a low shot saved by the feet of home custodian Jayson Leutwiler.

The Pilgrims kept up the pressure from the subsequent corner that fell to Panutche Camara for a low drive blocked by Connolly. It was the final contribution for Camara, who was replaced by Fornah on 11 minutes.

There was a perhaps welcome period of calm for the Pilgrims to settle in the November sun at the Highbury Stadium but Fleetwood remained a threat with a low cross from Josh Morris cleared by Joe Edwards.

Good defending by Jerome Opoku quelled any threat from a Fleetwood corner but the next attack required superb work from Cooper, swiftly advancing to narrow the angles and save a shot from Morris.

Cooper was denying the same man moments later, saving low after a 20-yarder from Morris. It was, however, credit to the home side for an impressive intensity that had disrupted the normal Argyle rhythm.

Fleetwood extended their lead seven minutes before the break, when a clever pass released Burns for a run on goal and he squeezed the ball past Cooper to leave Argyle with the proverbial mountain to climb.

Scott Wootton was drafted in to replace Will Aimson before the half-time whistle sounded to give the Greens a chance to regroup and, three further changes was the response, with Lowe taking advantage of the new rule allowing five substitutes.

Opoku, Telford and Grant were the men withdrawn, with Jephcott, Hardie and Niall Canavan given the challenge to find a way back into the game. A deep cross from Mayor provided Jephcott with his first sniff but the header drifted wide of the target.

Unfortunately, there was no way back when Fleetwood added a fourth through Mulgrew, who found space at the near post from a set-piece to glance a deft header past Cooper.

Barton took the opportunity to bring on Evans and Whelan for Madden and Rossiter, but the changes did not alter the pattern, as Camps got in behind for another opportunity and he was only denied by a flick off the boot of Cooper taking the effort on to the post.

Argyle did manage a bright moment when Mayor shifted a pass inside and Fornah took the shot first time from 25 yards, sending a dipping and curling effort inches past the upright.

The afternoon sadly deteriorated further a minute later, as a half clearance from the Greens was perfect for Camps to rifle a tremendous strike into the roof of the net.

The hosts made three further changes, introducing Barrie Mackay, Mark Duffy and Coutts for Finley, Morris and Burns. Mackay quickly forced Cooper into a decent save from a curling effort.

Argyle managed to find something to cheer with a super goal six minutes from time and fine cross by Nouble was met on the half-volley for a sublime finish from Jephcott.

A difficult afternoon had one final unwanted twist as Canavan was dismissed for a second bookable offence and the Greens will dust themselves down quickly for the midweek trip to Peterborough.