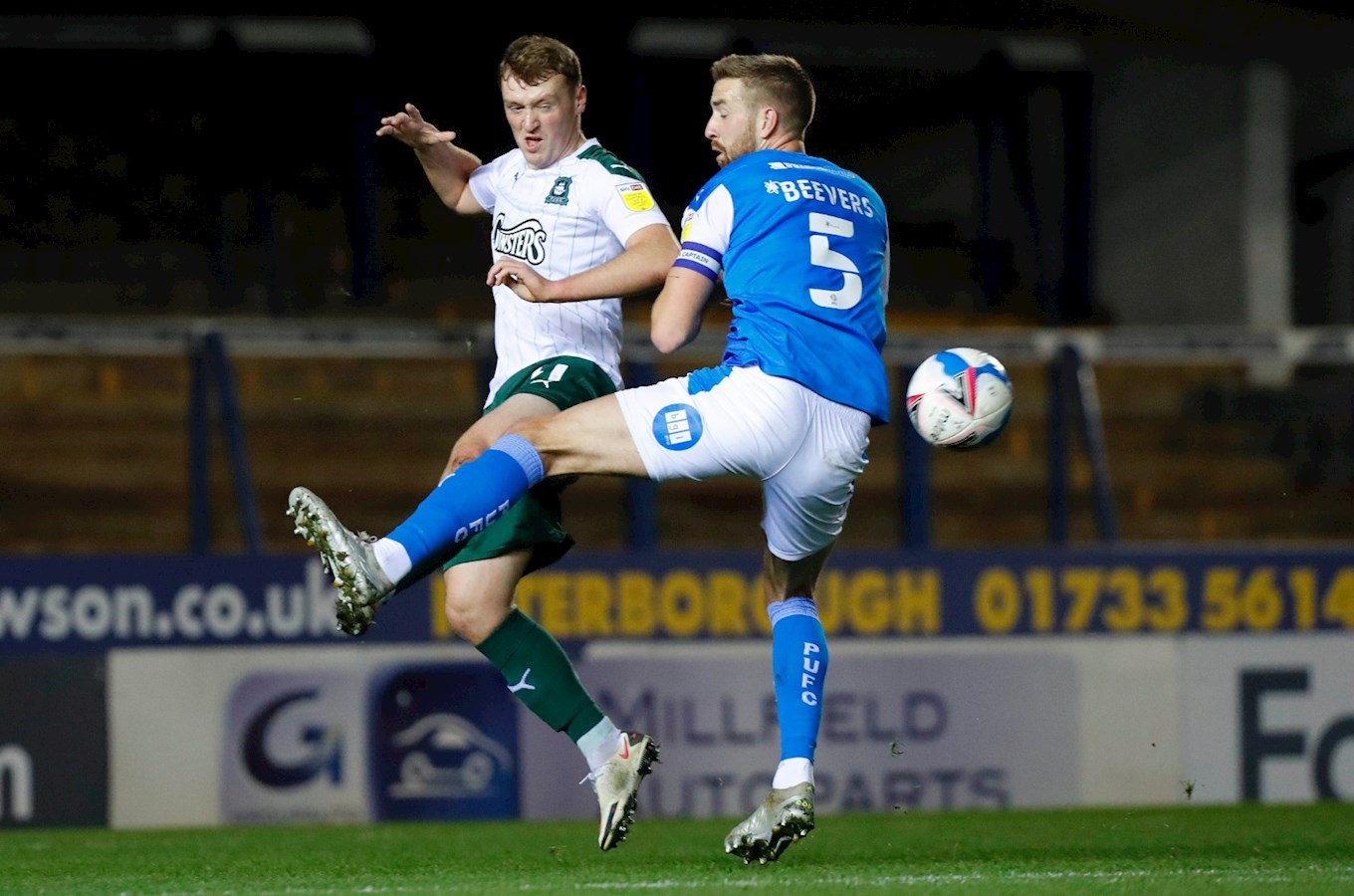 A solitary goal from Jonson Clarke-Harris was enough for Peterborough to inflict a 1-0 defeat on a brave Argyle performance.

After a tough loss at Fleetwood three days earlier and an immense amount of miles covered, the Greens were outstanding with their energy and drive to claim at least a point.

Unfortunately, the powerful low drive from Clarke-Harris proved to be the decisive moment, despite the Pilgrims knocking on the door in a breathless second half.

Argyle boss Ryan Lowe made five changes from the weekend defeat at Fleetwood, starting with Scott Wootton replacing Will Aimson at the back and Tyrese Fornah coming into midfield ahead of Panutche Camara.

George Cooper returned to his former club as a replacement for Byron Moore at left wing-back and the youthful strike pairing of Luke Jephcott and Ryan Hardie was preferred to Frank Nouble and Dom Telford. Ben Reeves returned to a spot vacated on the bench by the suspended Niall Canavan.

Peterborough manager Darren Ferguson opted for two alterations to the team that suffered a late loss at home to Blackpool on Saturday, with Joe Ward and Niall Mason replaced by Ryan Broom and Frankie Blake-Tracy.

In a terrific start to the game, Conor Grant had a shot charged down and fine running in the channels from Hardie won a corner, delivered by Cooper but well cleared by the Peterborough defence.

The Posh came back with successive corners of their own, the first headed away by Jerome Opoku and then Wootton did an equally solid job at the near post from the second set-piece.

The home side found some momentum with a spell of possession but the Greens were able to keep their shape with impressive discipline, and the relentless work-rate ensured no time on the ball for Peterborough.

When the hosts did find some room from a swift counter, the ball was threaded by Jack Taylor to Sammie Szmodics, who was denied an opening goal by a fine save from the legs of Mike Cooper.

Argyle responded with a clipped pass into the area from Cooper aimed at Jephcott but he was just unable to get it under his spell before the experienced Mark Beevers intervened to hack clear.

The game descended into a midfield tussle through the middle of the first period and great intensity from both teams, especially in the midst of a hectic fixture schedule.

A super ball down the line from Cooper released Hardie for a first-time cross that was just inches too high for the run of Jephcott. Peterborough replied with a fizzing low 25-yarder from Reece Brown that flew narrowly wide.

Argyle’s next attack came from a superb claim and quick throw by Mike Cooper releasing Joe Edwards. The ball was worked over to the opposite flank and Cooper's dipping cross deceived Peterborough custodian Christy Pym but Jephcott was unable to get the final touch.

The hosts came back with muscular forward play Jonson Clarke-Harris in feeding the ball to Siriki Dembele, who cleverly shifted his feet before dragging the final shot wide from a good position.

A bright end to the first half continued with Edwards winning a free-kick 22 yards from goal. Grant fired the set-piece into the home wall but the tenacity of Jephcott forced a corner from the loose ball, which was cleared by Clarke-Harris.

Moments later, Clarke-Harris was inflicting far more painful damage at the other end, picking up on a delightful little pass from Dembele and the finish was driven hard and low into the bottom corner.

The Pilgrims entered half-time with the game still very much alive and clever work from Jephcott and Danny Mayor very nearly conjured an opening within a minute of the restart.

A surging run from Opoku then split the home midfield and tremendous energy from the Greens won a corner swung over by Cooper, but it was well caught by former Exeter goalkeeper Pym.

Peterborough recovered from the early onslaught with a dinked cross from Dembele picking out Szmodics, who sent a looping header safely over the bar.

Szmodics had his radar back on song from the next attack, slipping a fine pass into the left channel for Dan Butler and he took the shot first time, steering a low effort back across the advancing Mike Cooper and a reprieve for Argyle as it ricocheted clear off the foot of the post.

The dancing feet of Mayor responded with a sumptuous run into the box and when his effort was charged down, the loose ball fell to Cooper for a curling strike from distance that proved comfortable for Pym.

A fabulous exchange down the right between Grant and Edwards created space for a cross from the former that was cleared. Lowe sought to grab the initiative by introducing the fresh legs of Nouble for Hardie.

The Pilgrims had the hosts camped in their own area until a swift counter from Broom led to a deep cross to Clarke-Harris but he miscued the volley from six yards out. Straight back to the other end, and a right-footed effort from Cooper sliced wide of the post.

Argyle made two further changes for the final 20 minutes, removing Edwards and Grant for Moore and Reeves. The switch in personnel had little impact on the pattern of proceedings, as Argyle continued probing for an equaliser.

A first-time snap-shot from Jephcott produced a low save by Pym and Peterborough decided the moment had arrived for their own changes, introducing Mason and Ethan Hamilton for Broom and Brown.

Clarke-Harris then forced a fabulous save from Cooper, quickly followed by sublime skill by Dembele creating room for a shot that was steered wide. It was the last act for Clarke-Harris, who limped off to be replaced by Mo Eisa.

Argyle entered the final 10 minutes with Reeves impressive in midfield and a fourth substitution saw Telford come on for Jephcott. Peterborough then delved into their replacements, withdrawing Szmodics for Louis Reed.

The Greens displayed admirable patience in trying to find that big moment, eventually working the ball to Cooper for a shot blocked by the home defence.

Seven minutes of stoppage time gave Argyle extra hope of salvaging a point and the tireless Fornah continued to drive Argyle forward, but the key chance refused to arrive for the Greens, who must now quickly shift focus to the FA Cup on Saturday.