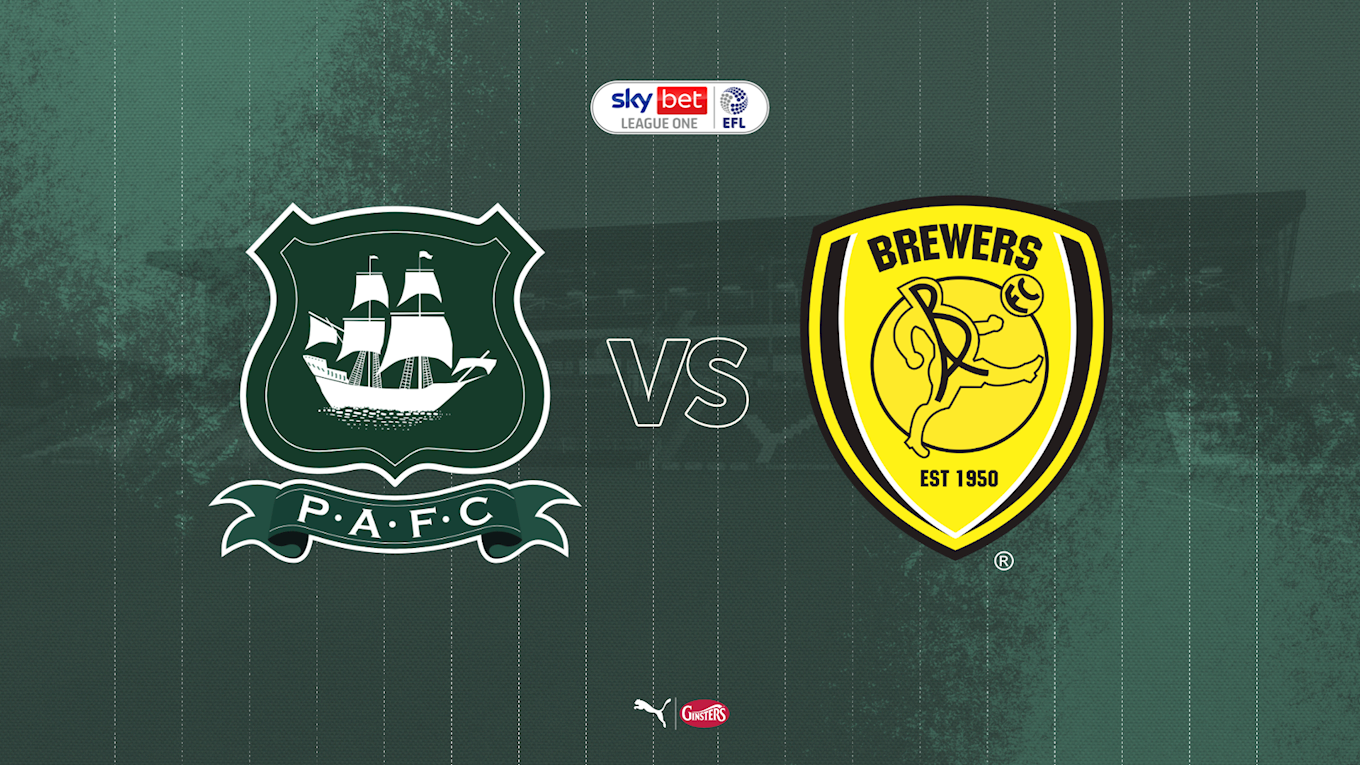 Having relinquished their unbeaten Sky Bet League One record in a narrow defeat at Hull City last weekend, Ryan Lowe’s Pilgrims are looking to bounce back with a win against Burton Albion at Home Park on Saturday afternoon.

The Greens showed no shortage of character in their 1-0 defeat at the KCOM Stadium last week, but could not force their way through an imperious defensive unit that has yet to concede a league goal this campaign.

The result leaves the Pilgrims in 13th place in an embryonic league table, with a record of one win, two draws, and one defeat from their opening four fixtures, while Saturday’s opponents occupy 23rd place, having collected three points so far.

The Brewers opened their 20/21 League One campaign with a 2-1 away defeat at Fleetwood Town, with academy graduate John Brayford netting for Jake Buxton’s side. The following week, they bounced back with a 2-1 home victory over Accrington Stanley, with Brayford snatching a late winner after Joe Powell had opened the scoring.

Since their victory over Stanley, though, Albion have suffered three consecutive defeats. Veteran midfielder Stephen Quinn and long-serving forward Lucas Akins were on target in defeat at the Energy Check County Ground against newly-promoted Swindon Town, before the Brewers surrendered a 2-1 lead, with Akins again scoring, to lose 4-2 at home to Portsmouth in their next outing.

Looking to get back to winning ways, Buxton’s team enjoyed a near-perfect start to their EFL Trophy tie against Cambridge United in midweek, going two up inside four minutes at the Pirelli Stadium, courtesy of Akins and Powell, before being pegged back to 2-2 at the interval. In the second-half, two late strikes for the U’s condemned Albion to an unwanted hat-trick of 4-2 losses.

Saturday’s visitors welcomed the experienced trio of Michael Bostwick, Luke Varney and Neal Eardley back into training this week, and all are pushing to be in contention for selection at Home Park, as will summer signing Steven Lawless, who returns from a period of self-isolation.

It is mixed news for the Brewers on the injury front, though, with danger man Akins struggling with an ankle injury sustained in midweek, and John-Joe O’Toole’s participation is also in doubt due to a dead leg. Midfielder Ben Fox is also likely to miss out on the trip to Devon as he awaits the result of a COVID-19 test, while summer signing Charles Vernam is sidelined with a knee problem.

Argyle manager Ryan Lowe will have several senior squad members fresh and ready to go after resting them for the midweek trip to Cheltenham, while Luke Jephcott has returned to full training, having recovered from a thigh injury.

Lewis Macleod, who missed the trip to Hull City with a bruised knee, may also be in contention for a return on Saturday, while experienced goalkeeper Luke McCormick has returned to light training following a shoulder problem.

ARGYLE AT HOME TO BURTON ALBION IN THE EFL

Carl Fletcher’s Pilgrims hauled themselves off the bottom of the EFL on goal difference in dramatic fashion during the sides’ first competitive meeting at Home Park.

An 89th minute penalty from skipper Simon Walton gave the struggling Greens a vital three points in their fight to stay in the league. Walton had previously given Argyle the lead in the 47th minute, before Calvin Zola equalised for the Brewers on 73 minutes.

Freddie Ladapo gave Derek Adams’ Argyle the lead as early as the ninth minute, only for Kyle McFadzean, brother of former Pilgrim Callum, to equalise for Burton on 19 minutes. Ladapo restored our lead on 34 minutes, but Lucas Akins ensured parity at half-time with a 39th minute strike.

Unfortunately, McFadzean’s second goal of the afternoon, an 84th minute header, meant that the Brewers took all three points back to Staffordshire.

Biggest win: The 2-1 victory in our first meeting at Home Park in January 2012 (see above). This represents our only win over Burton, either home or away, in ten attempts in the league.