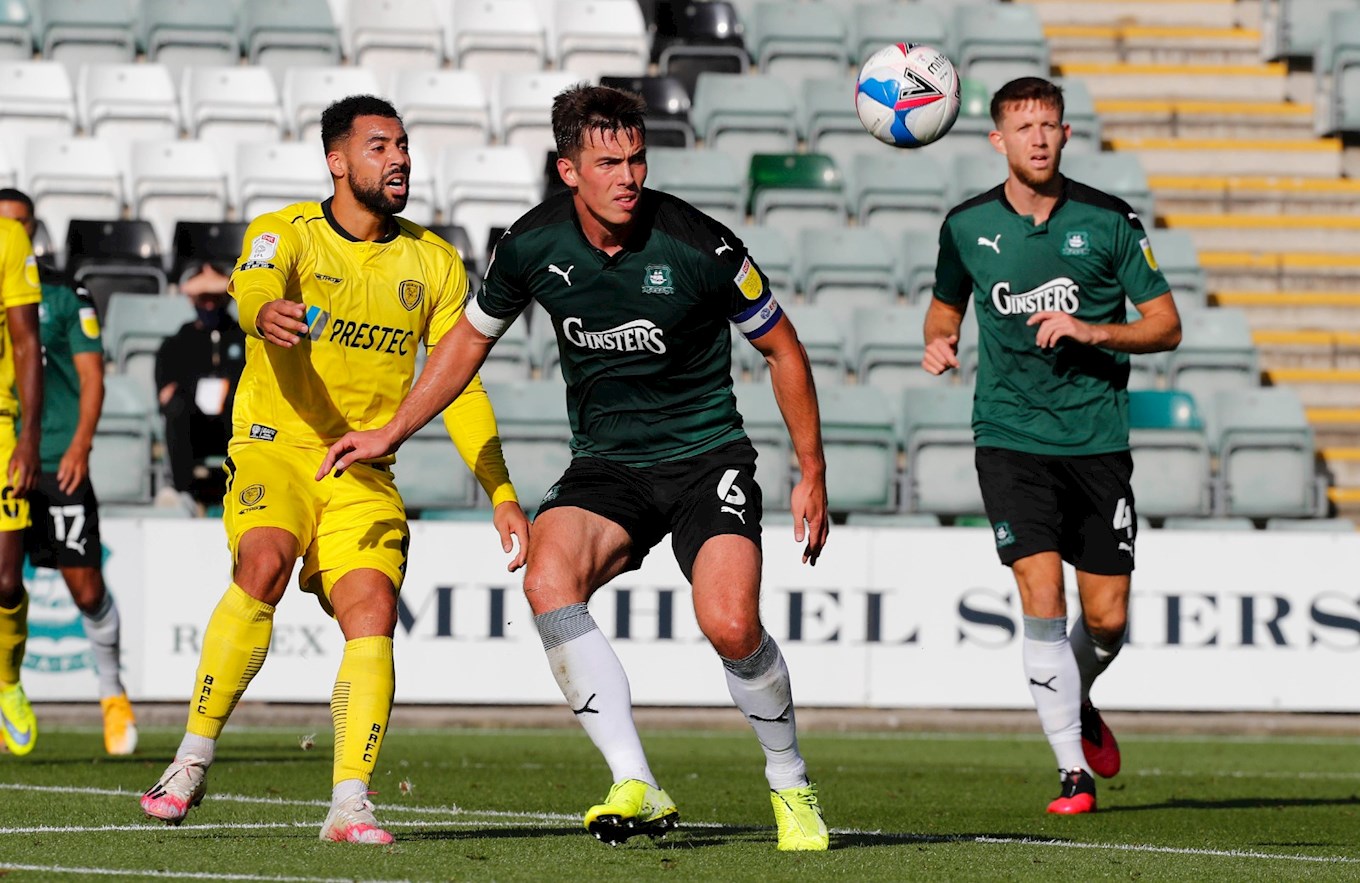 Argyle cruised to their second win of the Sky Bet League One season with a powerful display over Burton Albion at Home Park.

Luke Jephcott marked his recovery from injury to score the opening goal on 25 minutes and it was the least the Pilgrims deserved from a strong first period.

The game effectively ended as a contest early in the second half, when Byron Moore scored from close range and Argyle comfortably controlled the rest of the game for three very satisfactory points.

Argyle manager Ryan Lowe opted to make four changes from the side narrowly beaten 1-0 at Hull City last weekend, starting with Will Aimson preferred to Scott Wootton in defence and George Cooper restored to the left wing-back berth ahead of Jerome Opoku.

After an impressive debut in the EFL Trophy outing to Cheltenham in midweek, Tyrese Fornah replaced Panutche Camara in the midfield anchor, while Jephcott returned to bump out Ryan Hardie. The bench included Ben Reeves, who came through unscathed from the Trophy.

Burton boss Jake Buxton also made four changes, most notably to a leaky backline that conceded four goals in the loss to Portsmouth last weekend. Out went the defensive trio of Colin Daniel, Ben Fox and the injured John-Joe O’Toole.

New loan signing from Leicester, Sam Hughes, was handed his debut, with Michael Bostwick and Neal Eardley returning to the starting 11. American forward Indiana Vassilev made his first start ahead of Charles Vernam.

Kane Hemmings enjoyed the first foray for the Brewers, turning on the gas for a swift run and cross from the right headed over by Ryan Edwards. Vassilev then had a speculative effort comfortably deflected into the arms of Mike Cooper.

Argyle responded with some excellent approach work involving George Cooper and Conor Grant creating room for Byron Moore to break into the box, and his driven low cross was only just scrambled clear by the new-look Burton defence.

The Pilgrims continued to turn the screw with more bright work from Cooper and Danny Mayor winning a second corner, which was headed away by the visitors in a swirling wind at Home Park.

John Brayford sadly only lasted 12 minutes for the Brewers before he was forced off with an injury and replaced by Kieran Wallace. The new man was quickly into the action, helping an increasingly stretched Burton defence repel another dangerous cross from Cooper.

There was a pleasing fluency about Argyle work and passing combinations in the opening 20 minutes. Cooper typified the Gren belief with a curling cross from his right-foot finding the back-post run of Moore to meet on the volley, but the legs of goalkeeper Ben Garratt saved Burton.

Garratt had a moment to forget from the next attack, with Grant flicking a for Jephcott just inside the penalty area and the young Welshman steered a shot toward the near post. The fact Jephcott took his effort so quickly possibly surprised Garratt, as the ball squirmed through his grasp for Argyle’s opening goal.

There was an air of confidence around the Greens that was in stark contrast to the fragility of the visitors, although a vicious whipped corner by Joe Powell did require a solid punched clearance from Mike Cooper.

Argyle’s other Cooper shifted the emphasis back to Garratt with a drilled low shot after excellent work from Mayor to manufacture the chance, but the visiting custodian made some amends for his previous error with a decent block.

The next Pilgrim move was sumptuous, instigated by Mayor, laid off from Jephcott to Cooper, who threaded a pass to Mayor, who had continued his run, and a real shame the final cross just evaded Argyle’s onrushing frontmen.

Mayor finished the half with a long-range effort dragged wide and the only blot on the Green landscape from a dominant first 45 minutes was the lead remained just the one goal.

Argyle cleansed that blot within two minutes of the restart, with Cooper fizzing a low cross into a corridor between Garratt and the Burton defence, who were unable to deal with the problem, as the ball bobbled free for Moore to notch the easiest possible goal from two yards.

The scoreline now reflected the reality of the game and the Brewers had no choice but to commit more men forward to test a home defence looking in complete control of any situation posed by the visitors.

One lapse did arrive when a cross-field pass was an inch too high for Aimson, presenting Vassilev with a run on the Argyle goal, but he steered his shot wide with Cooper quickly off his line to narrow the angle.

The Greens reasserted their authority with an inside pass from Cooper to Grant and the shot was deflected wide with Garratt rooted to the spot. The subsequent corner from Grant was too high to pose a threat.

Burton, to their credit, kept probing and Lucas Akins glanced a header well wide in a decent five-minute spell from the visitors. Lowe decided the time had arrived to make his first change on 67 minutes, removing George Cooper for Joe Edwards, with Moore switching from right to left.

The impressive Fornah restored Argyle control with a tremendous surge from his own box to win a free-kick by the Burton corner flag and a whipped cross from Grant was nodded over by Kelland Watts.

The Brewers came back with a set-piece of their own after Niall Canavan felled Joe Powell on the edge of the box and a curling effort from Eardley was expertly tipped over the bar by Cooper. Argyle then made their second change, introducing Reeves for Grant.

Reeves quickly made his first impression with a pass to Mayor, who sauntered through the middle with another elegant run but the final shot was too high to trouble Garratt. Argyle’s final switch of the afternoon saw the fresh legs of Telford drafted in for Jephcott on 79 minutes.

Reeves continued to have a positive influence on proceedings, linking well with Mayor and, along with strong, unselfish work from Frank Nouble, ensuring the ball stayed safely in Burton’s half of the pitch. Mayor then changed the tempo with a strike from distance well held by Garratt.

Burton toiled until the end but Argyle were simply too strong in all departments.