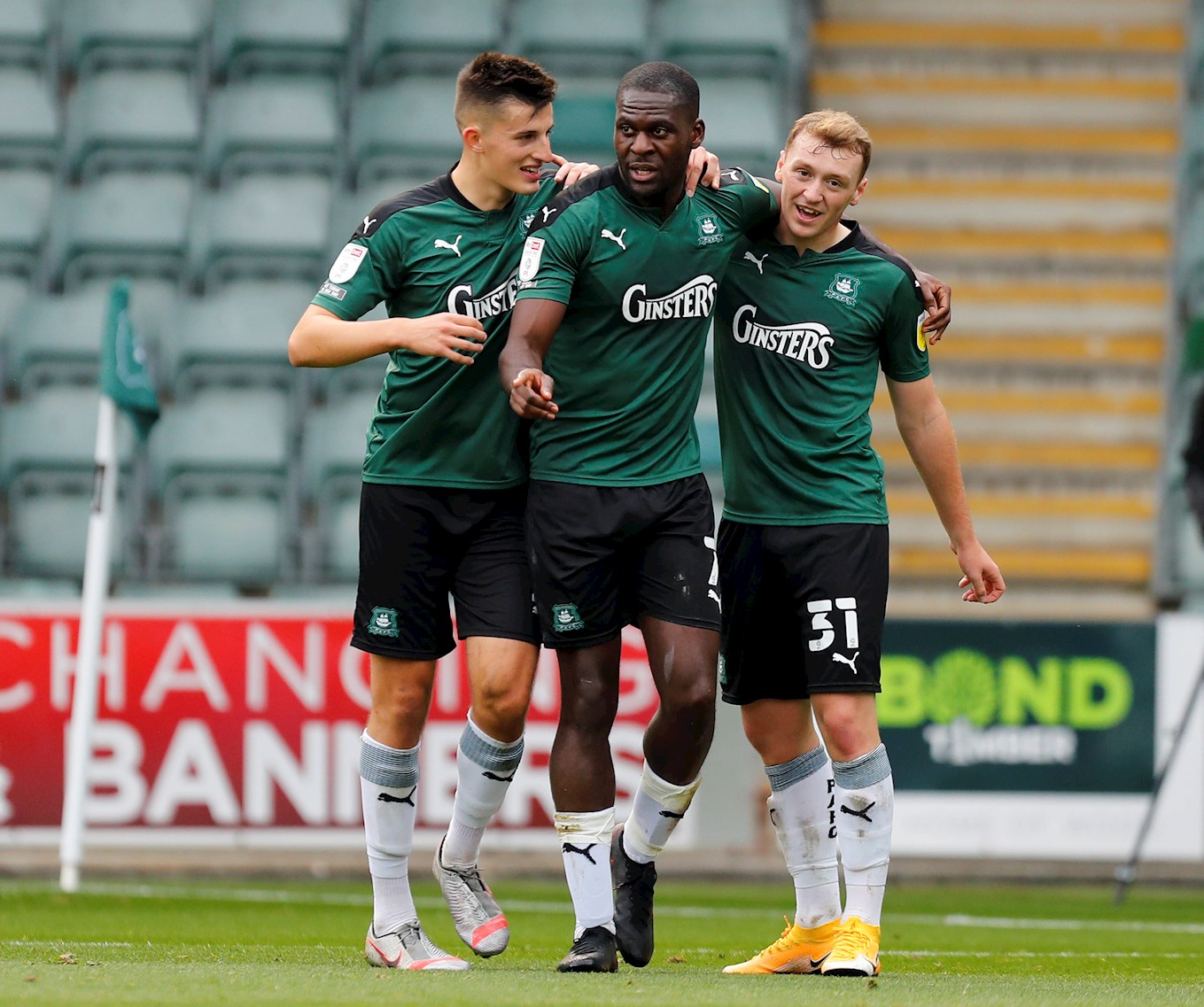 Goals toward the end of each half from Frank Nouble and Kelland Watts bagged Argyle a second successive victory on home turf.

The Greens controlled the first 45 minutes and were rewarded with an opener from the head of Nouble, but Northampton enjoyed their best spell around the hour and levelled matters with a goal from Ricky Korboa.

The Pilgrims regrouped and reassumed control, deservedly grabbing the late winner through Watts and a corner count of 15 to four summed up an afternoon that ended with the justified outcome.

Argyle manager Ryan Lowe stuck with the same starting line-up that performed so solidly in defeating Burton Albion 2-0 last weekend. There was, however, a place on the bench for new loan striker Timmy Abraham, with Klaidi Lolos missing out.

The Pilgrims, as has been the trend this season, started brightly, and a scuttled pass into the box from Danny Mayor bounced off the visiting skipper Cian Bolger, who was mighty relieved to see the loose ball just elude the lurking run of Nouble.

Argyle continued the forward momentum with a Conor Grant effort deflecting off a Cobbler head for a second corner in the opening ten minutes but a short set-piece for the jinking run of Mayor was well marshalled by Michael Harriman.

Northampton’s first shot in anger came from a 35-yard free-kick by Sam Hoskins that was grasped on the second attempt by Mike Cooper. The play was soon back up the other end with Mayor looking extremely bright in the Argyle midfield.

The number 10, for his next trick, fed the ball wide for Byron Moore and his dipping cross bounced in the middle of the box for the onrushing George Cooper, but he was unable to keep his header low enough to trouble custodian Steve Arnold.

The Cobblers arrived at Home Park looking to stem the tide after three successive 2-0 defeats in the league and there was an understandably defensive outlook from the visitors in the opening half-hour, although the strategy almost came undone when Nouble flicked on a Cooper cross for Will Aimson, who was denied by a brave block from Danny Rose.

It was a first half that looked like it would require something special to prise open the Northampton defence. Step forward Mayor with a rasping drive from distance that had Arnold diving full-length as it whistled just past the top corner.

Grant took on the creative mantle with a delicious right-foot cross that was headed out for a corner by Bolger under heavy pressure from Luke Jephcott. Bolger was in towering form again moments later to head clear the subsequent set-piece.

It was, however, a momentary reprieve for the visitors, as Nouble peeled off the Northampton defence and was picked out beautifully by a Grant cross. The powerful forward measured his header perfectly to creep inside the near-post and a reward for Pilgrim patience in the first period.

The creator of Argyle’s key moment was unable to take his place for the second half, with Ben Reeves the readymade midfield replacement for Grant.

The Greens continued their progressive momentum after the restart, as a surge down the left from Nouble resulted in a cross that narrowly missed the run of Jephcott. The half-clearance led to a foul 25 yards from goal and Cooper curled a wonderful free-kick toward the corner that required the full frame of Arnold to tip it over the bar.

Mayor and Cooper combined in traditional fashion moments later, and a deep cross from the latter was met by Aimson, who was unlucky to see his header from a tight angle hit the side-netting.

A dominant Argyle display deserved a second goal but, until that arrived, there was always the natural concern of a Northampton counter, as proved by a Hoskins run into the left channel. Thankfully, his final shot was skewed horribly wide.

Northampton’s next effort was a lot sharper, with Korboa dancing inside from the right and a driven cross was met on the volley by Michael Harriman, but Mike Cooper produced a stunning reaction save to turn the ball over his own bar.

The Cobblers were suddenly a far bigger threat and that concern for a counter became reality when Hoskins surged through the middle and released Korboa in the box for a low left-foot finish back across Cooper and into the bottom corner.

Argyle were defending again within a minute and grateful to see a Harriman strike drilled wide of the near post. The Pilgrims responded with a corner from Mayor picking out the lively Nouble for a header steered narrowly over.

Curle turned to his bench on 65 minutes, introducing Luke Racic for McWilliams, and the new man entered a far more open encounter. Argyle sought to regroup with a prolonged spell of possession, using the calm assurance of Tyrese Fornah as a fulcrum in midfield.

Eventually, the tempo increased for a Mayor shot blocked by Fraser Horsfall and then Moore had a drive deflected wide. Argyle were probing hard, as Cooper was the next to have a shot charged down by the Cobblers, who took a breather by removing Rose for Benny Ashley-Seal.

Superb play from Mayor once again provided room for Cooper to whip over a cross and Nouble stooped cleverly for a fine header that shaved the top of the bar. Northampton, meanwhile, made their final change, withdrawing the tiring Korboa for Caleb Chukwuemeka.

Lowe twisted with ten minutes left on the clock, handing a debut to Abraham for Jephcott. Mayor remained the major danger, however, shifting inside for a shot deflected over for yet another corner.

This time the set-piece worked a treat, as a fabulous deep corner from Cooper was met on the volley by Watts, who expertly controlled the finish to score his second goal of the season for Argyle.

It was a final contribution from George Cooper, withdrawn for Jerome Opoku, as the Cobblers were forced to throw men forward, prompting a curling shot by Watson that proved comfortable for Mike Cooper.

Argyle saw out the final few moments in pleasingly professional fashion and three more points represented a tremendous start to life in Sky Bet League One.