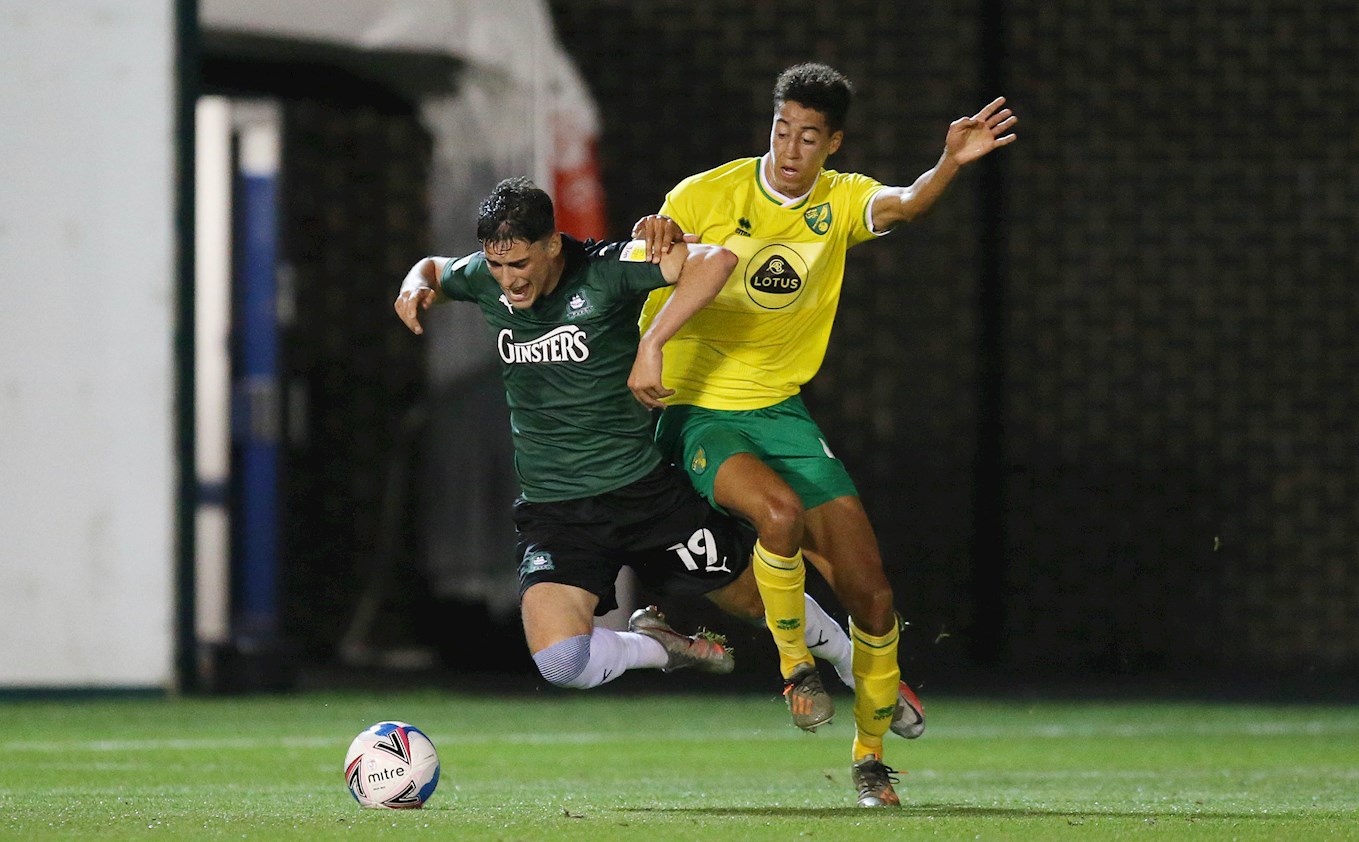 Argyle came out the wrong side of a five-goal thriller in the EFL Trophy meeting with Norwich City Under-21s at Home Park.

The Pilgrims twice went behind and twice equalised, but a third from the Canaries proved a step too far in a terrific game significantly marred by a concerning injury to Gary Sawyer.

William Hondermarck broke the deadlock for Norwich on 24 minutes but a Klaidi Lolos penalty brought Argyle level at the break. Tyrese Omotoye restored the visitors’ lead early in the second period, only for Dom Telford to head in a second Pilgrim goal.

The decisive fifth fell to Norwich, as Matthew Dennis sealed the points for his team with an assured finish on 67 minutes.

It was, understandably, a complete change of personnel from the weekend win over Queens Park Rangers in the Carabao Cup, as Argyle manager Ryan Lowe freshened up his ranks.

Just hours after completing his move to Home Park, Jack Ruddy was handed the goalkeeping duties behind a back three of Ollie Tomlinson, Niall Canavan and captain Sawyer, who missed out on Saturday through suspension.

Byron Moore and birthday boy Ryan Law occupied the wing-back positions, with Lolos, Adam Randell and Panutche Camara operating inside. In attack, Telford partnered Luke Jephcott, who was back in Green after a spell away on international duty.

Incredibly, the 19-man squad included 10 players who have either graduated from the Argyle Academy or are currently apprentices. Youth is definitely getting the chance to shine at Home Park.

A bright start from the Greens saw Camara pinch the ball in midfield and release Jephcott down the right wing, but his driven low cross was well held by the Norwich custodian and captain Jon McCracken.

The Canaries tried to respond with a spell of calm possession, a move that failed to materialise in the face of intense pressing from the Pilgrim midfield, with Camara and Randell breaking up any hope of the visitors developing any rhythm.

Jephcott then took on the mantle of harassing the visitors, winning the ball on the right and his cut inside to Telford was only prevented from reaching its destination by a desperate outstretched Norwich toe.

There was a pleasing sharpness and intensity about the Pilgrim play. Law, in particular, was causing a number of problems down the left and a formation perfectly suited to his energy on the flank.

Assistant manager Steven Schumacher was directing operations from the bench, with the boss watching from a higher position. Whatever the view, it was very enjoyable stuff from a Pilgrim perspective, as Law again found space for a pass to Lolos, who swivelled for a shot deflected over the bar.

From nowhere, Norwich took the lead on 24 minutes, when Ruddy raced off his line to sweep up a long ball over the top. The clearance was sound enough but fell kindly to Hondermarck, who cleverly steered an excellent low finish into the empty net.

Argyle replied with good work from Moore threading a pass to Lolos, who jinked past his man on the edge of the penalty area and rifled a decent strike toward the top corner that required solid handling from McCracken.

A run and cross from Telford was turned away for a corner, which led to a Lolos header tipped over the bar. Pressure on the Norwich goal was relentless but, somehow, the visitors survived.

Norwich were given some relief from a rare attack of their own and a neat turn by Dennis created space for a shot that forced Ruddy into an excellent block, beating the ball away with his fists.

Moments later, referee Andy Davies was pointing to the penalty spot for Argyle after superb skill from Lolos prompted a clumsy Norwich challenge. Lolos picked up the ball and sweetly struck a low spot-kick into the bottom right-hand corner for a deserved equaliser.

Dennis, at the other end, was proving a menace, as he used his pace to burst into the box and Ruddy again needed to be on his game, narrowing down the angles for a good save. His next block was even better, brilliantly turning a deflected low drive from Reece McAlear wide of the post.

The threat of Dennis remained in place early in the second period, racing in behind the Argyle defence and it was more good positioning from Ruddy to palm away the left-footed drive at the near post.

A terrific sharp pass from Law ignited the Pilgrim attacking spark again and clever feet from Telford conjured some space, but the Norwich defence just about snuffed out the danger before a shot could be unleashed.

The Canaries responded with their second goal of the night and another sharp dart in behind from Omotoye, who kept his composure, neatly rounding the advancing Ruddy and stroking into a waiting net.

As with the first goal, Argyle immediately came back at their visitors and Randell, who was enjoying a fine game, drifted inside from the left for a speculative effort that whistled narrowly past McCracken’s near post.

The next effort did find the target, starting with a super pass from Sawyer releasing Law and his cross took a slight deflection before picking out Telford for a glancing header past the exposed McCracken. Argyle were level for a second time.

The highly impressive Law then danced inside his man for a low right-foot shot that was blocked by a Norwich foot. Average ages were considerably lower than Saturday but it was another enterprising game, following a similar pattern to the QPR victory.

This time, however, the fifth goal went to the visitors and it again came out of the blue, but credit to the dangerous Dennis, who found space in the area and finished off a clinical swift move from Norwich.

Ryan Hardie replaced Jephcott for the final quarter but the Pilgrims were soon thankful for a Dennis shot dragged wide after he had sneaked the wrong side of Tomlinson.

The next Norwich foray produced a very worrying moment for the Greens, as the retreating Sawyer was left in clear distress after a collision with an opponent. The only hope is that the injury proves not to be as bad as it looked.

Academy starlet Brandon Pursall came on for the stricken Sawyer and a fantastic opportunity for the teenager to showcase the next generation of talent at Home Park.

Argyle recovered their rhythm with a quick free-kick from Randell to Hardie in the box and the Scot fed the ball back out wide to Law for a first-time cross that was seeking out Telford, who was bundled over on the six-yard line. Strong and warranted shouts for a second penalty were ignored.

Joe Edwards replaced Moore for the final ten minutes and it was a case of now or never for the Greens. Norwich, to their credit, had no thoughts of resting on their lead and a header from Omotoye forced Ruddy into a decent reaction save.

The Greens kept on pushing to the end but will now need a victory at Cheltenham in their next group game to revive their EFL Trophy hopes for this season.