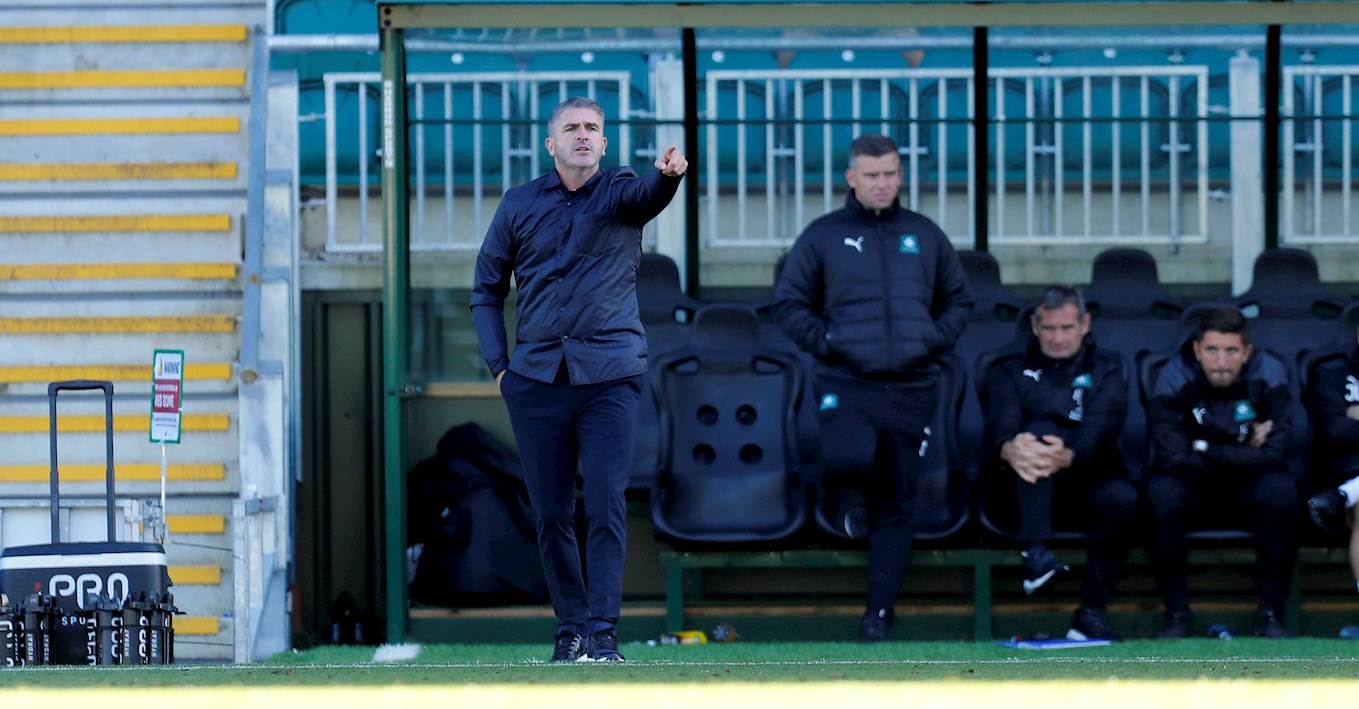 Argyle manager Ryan Lowe was pleased with the defensive progress on display during the Greens’ hard-fought 1-1 draw with Shrewsbury Town on Saturday.

After a challenging opening period in which the Pilgrims fell behind to Josh Vela’s deflected strike, Lowe’s side were rarely troubled by the Shrews’ forward line, and were perhaps unfortunate to have to settle for a draw in the end.

Lowe said: “I thought we were the most dominant side, second-half especially, the chances we created. I think Mike [Cooper] has only had to save two, and one’s a ricochet for the goal.

“First half, to be fair, they dominated the first 20 minutes and then obviously we changed it around a little bit to match their two up, and we had Danny [Mayor] in the pocket, and we got a lot more joy.”

It was a very different game of football to that experienced seven days previously at AFC Wimbledon, where eight goals were shared in a topsy-turvy 4-4 draw. Despite having only a few days on the training ground to implement changes, Lowe feels the Greens put on a much-improved defensive performance.

He said; “What pleases me most is the intention to keep the ball out of the back of the net also. You limit a good Shrewsbury Town team to two shots on target, shows that they’re doing something right.”

Argyle drew level when Conor Grant’s effort deflected off Frank Nouble and into the far corner, and the Pilgrims pressed further up the pitch as the game wore on, but were forced to settle for a share of the spoils against a stubborn Shrewsbury outfit.

Lowe said: “You always get frustrated. We’re in a new league, credit where credit’s due to Shrewsbury, they’re a good footballing side and they play the right way. Yeah, we were in the ascendancy, and we possibly could’ve got a winner, but sometimes that happens.

“We’re the new boys in the league, we’ll respect everyone – but we won’t fear them. We just need to go into these games on the front foot. We’ll lose some, we’ll win some, we’ll draw some. Same today, but we’re unbeaten. Would I have liked three points today? 100%, I would’ve. It wasn’t to be, but we have five points out of three games, I’m pleased.”

Lowe made a precautionary substitution midway through the first period, with Scottish midfielder Lewis Macleod unable to run off a knock sustained during last weekend’s fixture at Wimbledon.

The Pilgrims’ manager said: “Lewis had a little bang on his knee through the week, bone bruising. To be fair to him, he wanted to make sure he gave it a go, but that weren’t Lewis in the first 25 minutes, so I made the decision for him and took him off the pitch. He was devastated coming off, but that could probably save us two or three weeks out, and hopefully he’ll be alright for Saturday.”

Argyle will have another full week of training ahead of a challenging trip to face newly-relegated Hull City on Saturday – but do so full of confidence, with their unbeaten league run still intact.

Lowe said: “We’ve just had some discussions there with the staff, and what we feel we need to work on a bit better. It’s a big learning curve for us in League One this season because of the way we play, and we’ll keep learning, we won’t disrespect any team, and we know we need to tighten up in certain areas.

“When you win, everyone thinks it’s alright. But, for us, we want to make sure we keep learning week in, week out, and we’ve got another good week to work with the boys.”