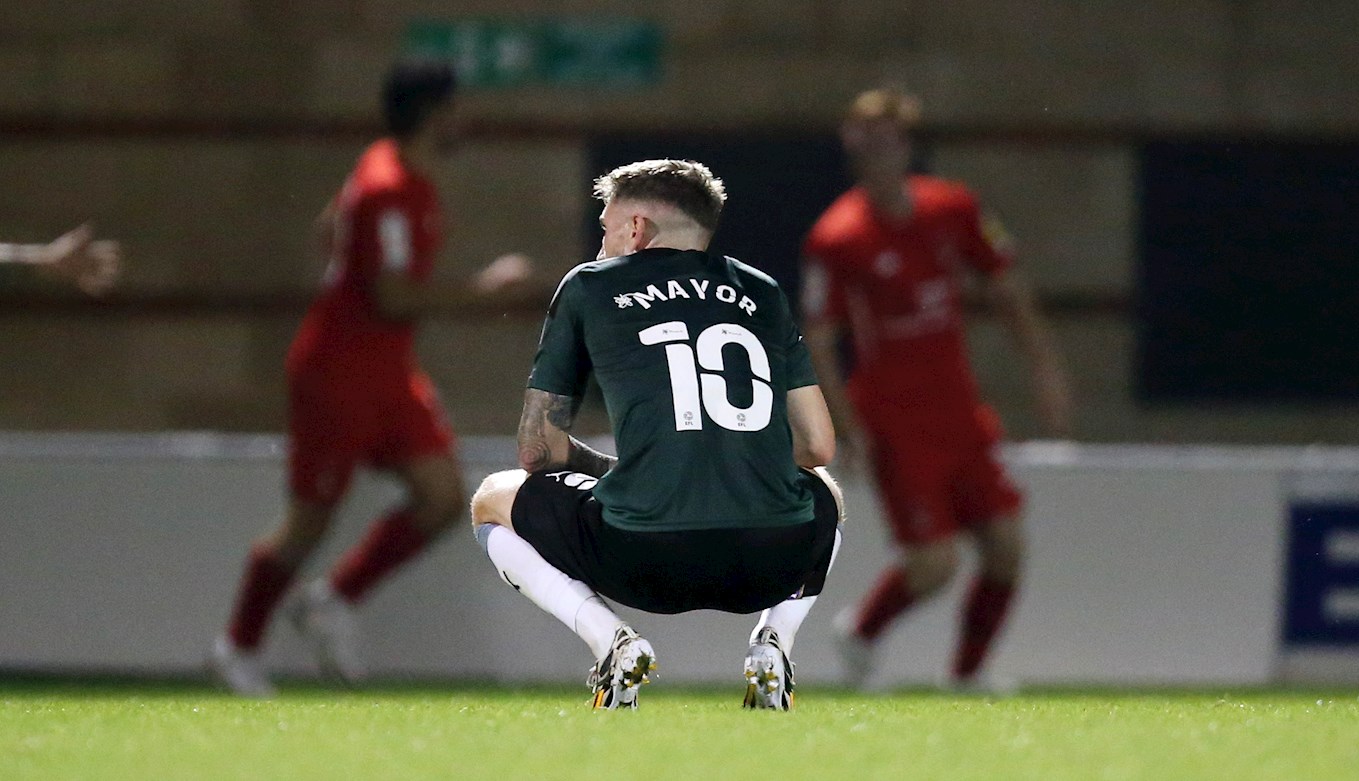 REACTION: Lack of ruthlessness cost us

The Greens looked to have one foot in the third round of the Carabao Cup at half-time, thanks to first goals in Green for Panutche Camará and Kell Watts, before three second-half goals for the hosts, capped by a last-gasp winner, sent Orient through instead.

Lowe said: “A game of two halves. First-half, cruising – should be out of sight, four, five nil, potentially. Second-half, Leyton Orient came out with nothing to lose and had a good go. Fair play to them, they deserved to win the second-half.

“I don’t think they deserved to win the overall match, but that’s what happens. Last week, against Blackpool, we put our bodies on the line, and they certainly did that today [Tuesday], and stopped us scoring more. Credit where credit is due.”

The Greens dominated large periods of the game at the Breyer Group Stadium, and could have been out of sight long before Orient netted their opener on 55 minutes. Lowe feels that the harsh lesson of missing out on a prize home tie against Premier League Tottenham Hotspur in the third round will serve as a harsh lesson for his players.

He said: “They’re sloppy goals for us, and we’re disappointed because we could be playing Tottenham Hotspur at Home Park – I don’t think that’s happened for a long time. The lads are disappointed, and I’ve made them aware, and we’ve got to make sure that we bounce back.”

“You don’t get Tottenham Hotspur to come to Home Park every day of the week, so it’s a big opportunity missed to pit your wits against Tottenham, whether they would’ve played the kids or not. I’m disappointed because we had a great chance, at 2-0 - 45, 50 minutes to see the game out, and we’ve missed it.”

At their fluent best in the first period, the Greens were enjoying near total domination in possession, clocking nearly 70% as half-time arrived. As far as Lowe is concerned, though, the Pilgrims’ first-half performance is the bare minimum he requires from his squad, and the second-half fell well below that benchmark.

“That’s what I expect [the first-half performance]. I expect to be the best team. I expect, with all due respect to Leyton Orient, I expect to have more possession, I expect to get through the lines like we did first-half. What I don’t expect is for them to score three goals where we should be able to deal with it. There were plenty of positives first-half, but second-half, there ain’t none.

“It gives us a bit of a reality check to say ‘oh, hang on a minute, we’re not that good.’ We’re a good team when we get going, and we could be an excellent team. You can’t take anyone lightly, and I think our lads probably took them a little bit lightly in the second-half.”

While clearly disappointed, Lowe is clear that attentions will swiftly turn to the trip to Loftus Road, the temporary home of AFC Wimbledon, for Sky Bet League One action on Saturday.

The manager said: “I made it known to the boys, they know, they understand, that the second-half performance was not acceptable, and we’ve got to learn from it.”

“We’ll be back on the training ground on Thursday, and we’ll see a reaction. We’ll pick a team that we feel can go and win on Saturday, but we’re up against another tough opposition in AFC Wimbledon – it ain’t gonna be easy, League One ain’t gonna be easy.

“What I’m hoping to see is something different from the boys, and I think they’ll do that, we’ve got a great group. Is it an off 45 minutes? I’m hoping so, yeah, because if I see another reaction like that in the second-half I’ll have to go and get a whole new team. I’m not saying that’s going to happen, because I’ll make sure it doesn’t, but the outlay of the second-half was not acceptable.

“They’re a good group, we’re four games in now. We’ve had no football for five months, we had a great start in the League One campaign. I want to win every game, and I know I can’t, but we’ve got to make sure we give a reaction, and we’ve got to go and perform on Saturday.

“If you don’t win games of football, I have to keep changing the team until you do that. I’ll pick them up, and make sure they’re right and ready on Thursday, and we’ll go into another tough game at AFC Wimbledon.”