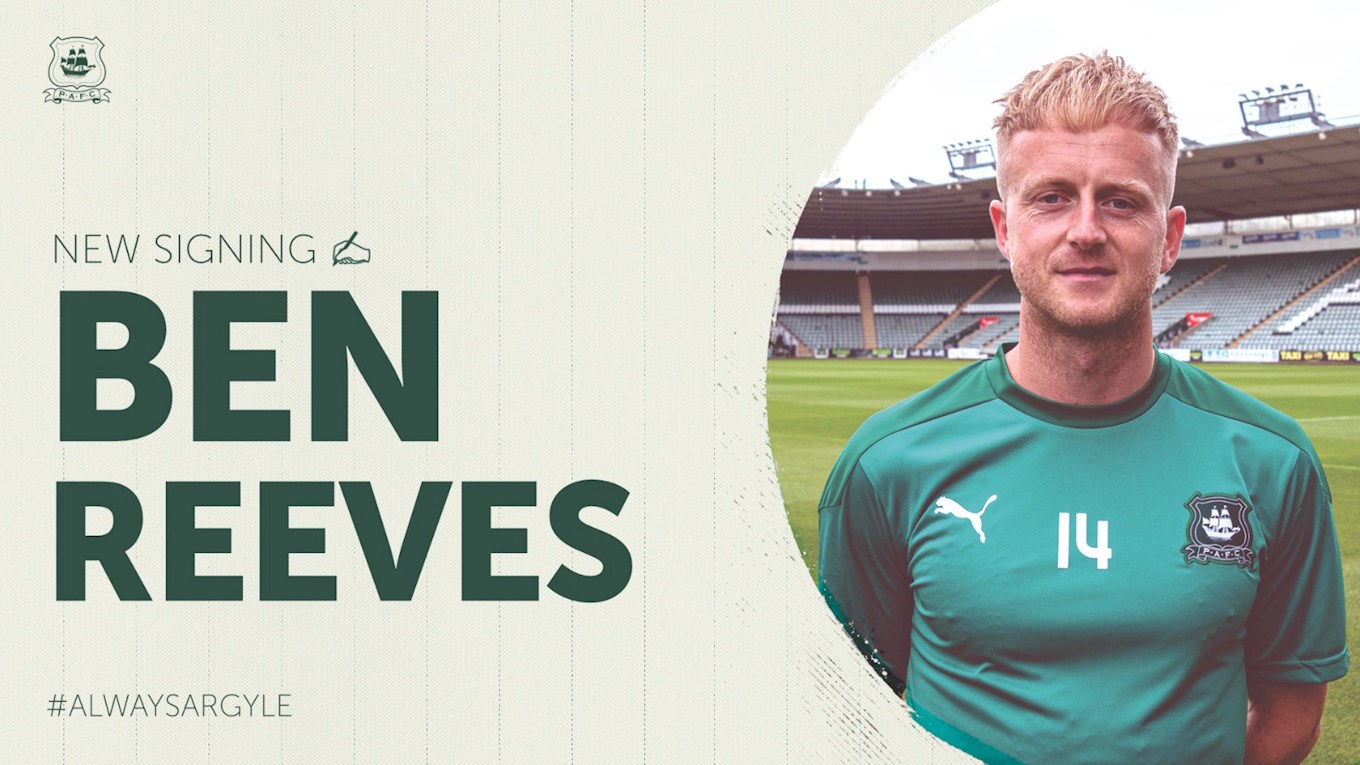 The 28-year-old left Stadium MK in the summer, and has spent the last week on trial at Home Park, including a cameo appearance as second-half substitute in the Greens’ 2-1 pre-season friendly victory over Forest Green Rovers.

Dorset-born Reeves began his career as a left back in the youth set-up at Southampton, before being converted to an attacking midfielder. He made his St Mary’s Stadium debut in Southampton’s 2-1 League Cup third round victory over Preston North End, laying on the opening goal.

Later in that same season, Reeves joined League Two side Dagenham and Redbridge on loan, making his Daggers debut against Argyle in a 0-0 draw at Home Park.

Having returned to Southampton for the start of the 2012/13 season, Ben netted his first professional goal in Saints’ 4-1 victory at Stevenage in the League Cup. A month later, he made his Premier League debut off the bench in a 3-1 defeat to Everton at Goodison Park.

Having made six competitive appearances for the Saints, Reeves joined Southend United on loan for the second half of the 2012/13 campaign, where he played alongside current Pilgrim Danny Mayor, netting the goal that sent the Shrimpers to the Football League Trophy final.

Reeves was released by Southampton that summer, beginning the first of two spells at Milton Keynes Dons. A stunning debut season in Buckinghamshire followed, with the midfielder netting 11 goals from 35 appearances, completing a clean sweep at the club’s annual awards ceremony by winning the Player of the Year, Players’ Player of the Year, and Supporters’ Player and Goal of the Year titles.

The following season, the midfielder played 36 games, netting seven times, as the Dons secured promotion to the Championship, and his form also contributed to senior call-ups to the Northern Ireland squad, where he earned two caps. Reeves remained with the club for two further campaigns, before following manager Karl Robinson to Charlton Athletic for the beginning of the 2017/18 season.

Reeves made 29 appearances for the Addicks in each of his two seasons at The Valley, as Charlton reached the play-offs in consecutive campaigns, and he appeared on the bench for his side’s dramatic play-off final victory over Sunderland at Wembley.

Ben will wear squad no.14 for the upcoming campaign.

Ben’s home shirt for the upcoming campaign is sponsored by Kevin Edwards Costs, but his away shirt is available for sponsorship.

Colin Carr, of Kevin Edwards Costs, said:“KE Costs Lawyers, the legal costs experts, are delighted to have the opportunity of sponsoring Ben, and wish him the best of luck for the season ahead.”