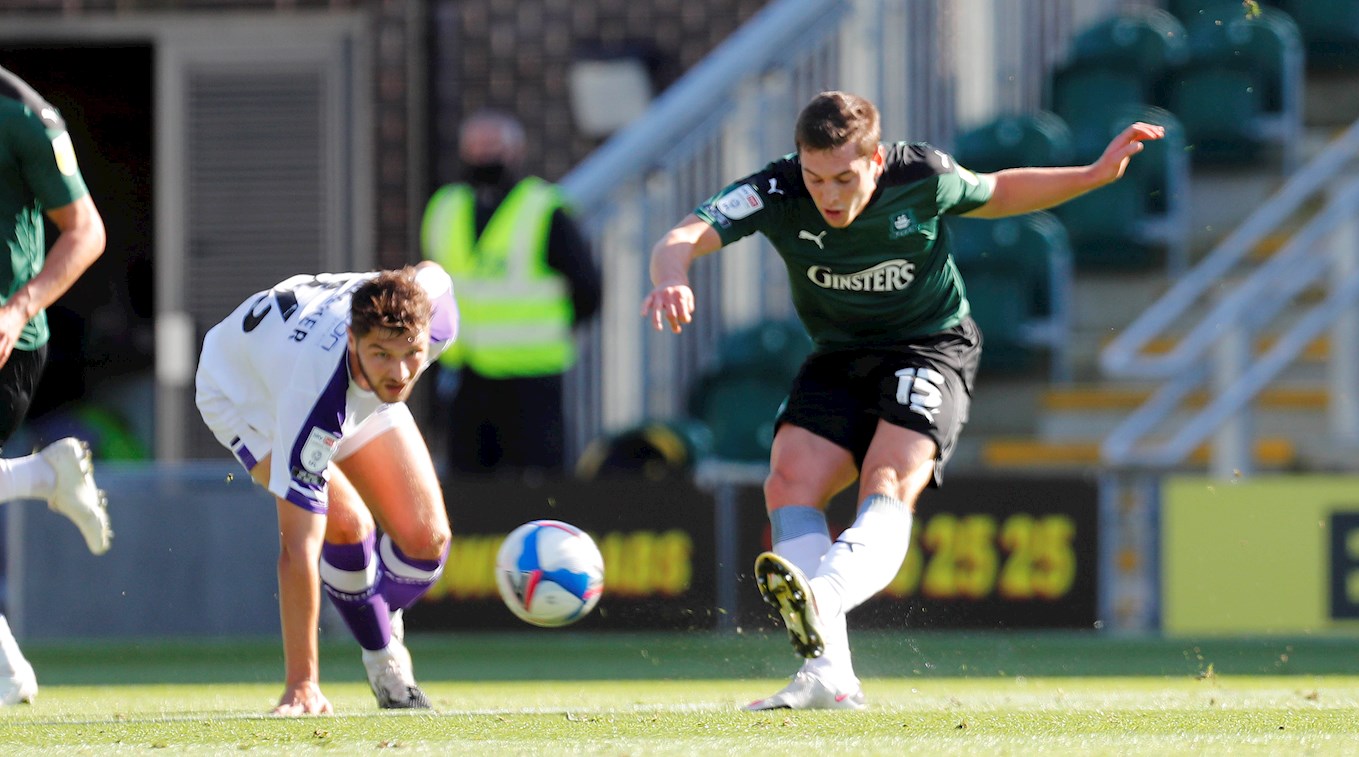 Argyle recovered from a slow start to secure a point that could have been more and extend the unbeaten league start to three games.

Shrewsbury came out firing and broke the deadlock with a Josh Vela strike on 14 minutes, as the Pilgrims took time find their fluent football.

When it did arrive, Conor Grant levelled the scores with a fine strike from the edge of the area and the Pilgrims controlled the second period without conjuring the big moment to take all three points.

Argyle manager Ryan Lowe made three changes from the enthralling 4-4 draw with Wimbledon last weekend, bringing Niall Canavan in for Will Aimson in defence and Byron Moore started ahead of Joe Edwards on the right, meaning a shift of captain duties to Canavan.

Dom Telford was rewarded for his goal-scoring impact at the Dons, as he joined Frank Nouble in attack, with Ryan Hardie dropping down to the bench. Adam Randell returned to the replacements at the expense of Ryan Law.

Shrewsbury boss Sam Ricketts made two changes from the defeat to Northampton Town seven days ago, withdrawing Ethan Ebanks-Landell for Aaron Pierre in defence and Daniel Udoh was the attacking replacement for the injured Rekeill Pyke.

The Shrews enjoyed a comfortable 3-0 win over Newcastle United Under-21s in the midweek EFL Trophy and there were three former Pilgrims on the visiting bench in Harry Burgoyne, Oliver Norburn and Leon Clarke.

Argyle were forced into some defensive work in the early exchanges, with Scott Wootton clearing his lines with a succession of towering headers. A snap-shot from Vela was too high to threaten Mike Cooper on six minutes, as the Shrews continued their bright work.

The Greens gradually found their rhythm in the glorious sunshine at Home Park with a period of sustained possession and Lewis Mcleod providing the steady fulcrum in midfield, with his calm and assured passing.

Vela then grabbed control of the afternoon, lashing home a super strike on 14 minutes from the edge of the area after a free-kick had been cleared into the path of the former Bolton midfielder. It was a fine effort and gave Cooper no chance in the Argyle goal.

Shrewsbury maintained their excellent tempo after the goal and the Pilgrims were struggling to establish a proper foothold in the game, as Shaun Whalley caused mild concern with a shot sent wide of the post from 20 yards.

A delicious pass from George Cooper changed the pattern midway through the first period, picking out the run of Telford, who quickly found an extra yard for a low shot back across goal that was well saved by Shrewsbury's Montenegro international goalkeeper Matija Sarkic.

His next intervention was truly remarkable. A Cooper cross found the head of Telford and the first effort was parried back to the Argyle forward, who rifled the rebound goalwards from close-range, only for Sarkic to produce an astonishing reaction save.

The Pilgrims were suddenly heading into top gear and Grant was the architect of a deserved equaliser, stepping back on to his left foot from the edge of the area for a strike that possibly glanced off the back of Nouble before finding the bottom corner of the net.

Momentum was now back in Argyle’s favour, although there was some disruption with Mcleod limping out of the action to be replaced by Panutche Camara.

Canavan displayed his leadership qualities with a pair of important clearances after crosses by Whalley and the lively American right-back Marlon Fossey, as Shrewsbury demonstrated a determined response to the leveller.

The dancing feet of Danny Mayor went into overtime on 41 minutes, conjuring room for a shot blocked by Ro-Shaun Williams and the rebound fell to Grant, but his right-footed effort bobbled well wide.

The game was poised for an intriguing second period and a whipped cross from Cooper almost caught out Pierre, who lost the flight of the ball as it ricocheted off his back and flashed inches past the post.

A threaded pass from Kelland Watts then picked out Cooper in the channel for a jink inside but the low drive was blocked by Williams. Ricketts soon had more defensive problems with Sarkic forced off with a muscle injury and Burgoyne, who never actually made an appearance for the Piglrims, finally getting his Home Park bow, but for the opposition.

Norburn became the second former Pilgrim introduced by Shrewsbury on the hour, replacing Scott High, and he soon had a shot blocked, with the rebound effort from Jason Cummings comfortably held by Cooper.

Generally, however, the game had become a little ragged, with Shrewsbury holding their shape and Argyle unable to find space for the likes of Mayor, Nouble and Telford to spin their attacking web. It was a scenario that prompted Lowe to withdraw Telford for the fresh legs of Hardie.

A swinging cross from Byron Moore did give Nouble half a yard and his guided header forced a decent low save from Burgoyne. The Shrewsbury reaction was to complete the ex-Green hat-trick, throwing on Clarke for Udoh.

Argyle lifted their tempo with a swift counter-attack on 75 minutes and Hardie slipped the ball into the path of Nouble, who struck his shot cleanly but was denied by a solid save from the legs of Burgoyne.

The Pilgrims were beginning to seriously turn the screw on their visitors, committing men forward in search of a winner, with Hardie bustling his way into space for a low effort that was easily snaffled by Burgoyne.

Shrewsbury countered down the left and a deep cross from Cummings hung in the air for Clarke, who collided with Mike Cooper in a nasty incident, which fortunately saw both men back to their feet after lengthy treatment.

When play eventually resumed, Argyle kept on probing for a decisive goal and the final chance fell to Hardie from an awkward angle, but the shot was dragged wide to complete the afternoon.