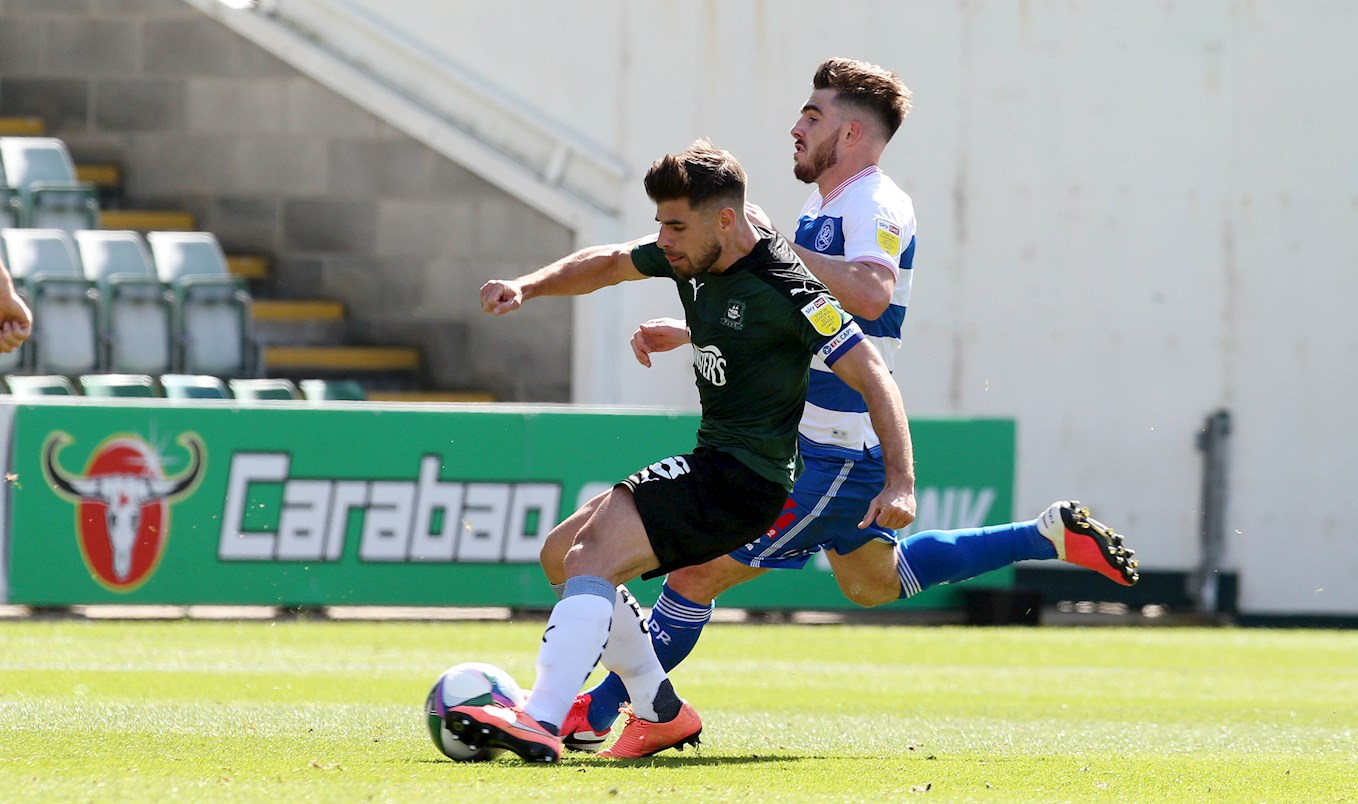 A fantastic return to competitive football at Home Park and Argyle produced a delightful display to overcome Sky BetChampionship opposition for a place in the second round of the Carabao Cup.

The satisfaction of victory felt like a forlorn hope when Ryan Manning headed Queens Park Rangers in front inside two minutes but Joe Edwards brought the Pilgrims level on the half-hour after a flowing team move.

The skill of Danny Mayor nudged Argyle in front on 55 minutes, only for Osman Kakay to level moments later, but the game was won with an early contender for Goal of the Season, with Frank Nouble volleying home a wonder-strike to complete a great win.

Edwards resumed skipper duties on the right flank after a sore ankle forced him out of the pre-season win over Forest Green Rovers, while club captain Gary Sawyer remains suspended following his red card against Bradford at the end of last season, meaning an immediate start for George Cooper after completing his midweek move from Peterborough.

Summer signing Lewis Macleod joined Conor Grant and Mayor as the midfield triumvirate, while Nouble was another debutant in attack alongside Ryan Hardie.

QPR boss Mark Warburton handed a debut to new signing from Oxford United, Robert Dickie, in the heart of his defence. Rangers said farewell to starlet Eberechi Eze in the summer, after he made a big-money move to Crystal Palace, but still a side packed with Championship quality and experience.

Argyle endured the worst possible start, falling behind on 67 seconds, when Manning found space in the Pilgrim penalty area to steer a clever header beyond the reach of Mike Cooper following a corner from Ilias Chair.

The Pilgrims responded with a settling-down period and then a foul on Hardie gave George Cooper the chance to remind everyone of his left-foot wizardry, curling a delightful free-kick beyond the QPR wall and against the post, with visiting custodian Joe Lumley beaten.

The power of Nouble was gradually having an influence in the Argyle vanguard but the pace of Rangers was a constant concern for the Greens, with Bright Osayi-Samuel looking particularly sharp.

There was a far more pleasing flow to proceedings as the game passed the 20-minute mark and a dancing run from Mayor on the left saw him cut inside full-back Kakay and unleash a goal-bound effort that was well charged down by Dickie.

A poor pass from Tom Carroll in the QPR midfield handed the initiative to Macleod, who immediately released Hardie on the right and his dipping cross was just inches beyond the darting run of Mayor at the back post.

The Mayor menace was becoming Argyle’s main source of penetration, as another drop of the shoulder prompted a melee in the penalty area, as efforts from the Pilgrim number 10, plus Nouble and Hardie, were all charged down.

There was a pleasing variety to Argyle’s approach, combining craft from midfield with the occasional direct ball for Nouble to continue ruffling increasingly concerned QPR feathers.

The equaliser was coming and, when it arrived, it was superbly orchestrated. A lovely ball into the left channel picked out the run of Hardie, who cut a pass back inside for the under-lapping Edwards, and he clipped an assured left-foot finish past the exposed Lumley.

Rangers tried to curb the home enthusiasm with a period of possession but there was too much zest from the Argyle midfield, with Lowe’s engine room snapping at the heels and Mayor finding pockets to control the game.

A sweeping pass from Hardie picked out the rampaging Edwards on the right and his cross on 38 minutes was half-cleared to Macleod, who was just unable to find the right connection on his strike to trouble Lumley.

QPR did briefly break the pattern with a ball over the top from Carroll superbly brought down by Osayi-Samuel but Wootton quickly spotted the danger, forcing his man wide enough for an eventual tame shot wide of the far post.

The final act of a pulsating first 45 minutes of the campaign came from a George Cooper free-kick whipped in from the right flank and the ball evaded everyone before nestling into the far corner, but an offside flag denied Argyle a half-time lead.

It was certainly a talking point at the interval, as no Pilgrim player came near to touching the cross, and the only infringement would have been onrushing attackers impeding Lumley’s view. The Green ranks understandably made a couple of polite enquiries to the officials as they retreated for half-time refreshments.

In a slightly concerning repeat of the first period, Rangers started the brighter and the lively Osayi-Samuel found space in the left channel for a shot on goal but Mike Cooper had his angles covered to beat the effort away for a corner.

This time, Argyle survived the set-piece, but the pressure continued with a Manning drive from distance palmed cleared to safety by Mike Cooper.

Unlike the first half, however, Argyle found their attacking rhythm a lot quicker, as the strength of Nouble allowed him to engineer a deep cross from the right. George Cooper fed the loose ball to Mayor, who, again, dropped his shoulder for half a yard, which was enough to drill his shot past Lumley.

Celebrations were barely finished before QPR struck back to equalise. The Greens were unable to properly clear and Kakay found room for a shot squeezed past Mike Cooper to make the scores 2-2.

Rangers were galvanised, and almost completed a two-minute turnaround when Osayi-Samuel flashed a tight-angle shot across the face of goal. The same man in Hoops then forced Mike Cooper into an excellent point-blank save from his next foray.

A thrilling start to the half continued with a clever spin and shot from Manning, brilliantly repelled by a strong hand from Mike Cooper, diving low to his left.

Warburton was the first manager to twist, removing Carroll for Paul Smyth, and the new man was very nearly congratulating team-mate Aramide Oteh, who jinked past Mike Cooper for a shot on goal, but Wootton had positioned himself perfectly to clear off the line.

The Pilgrims began to reassert some control with a confident sequence of possession football and Nouble was given a sniff of goal before being snuffed out by a good challenge from Conor Masterson.

QPR substitute Smyth then sneaked in behind the Pilgrim defence for a clean run on goal and his sliding shot was enough to beat the advancing Mike Cooper but the ball mercifully bounced off the post before being hacked clear by Aimson.

It was enough for Lowe to make his first change, introducing Dom Telford for Hardie, while the visitors replaced Oteh and Dominic Ball with Faysal Bettache and Olamide Shodipo.

The Green shuffle had an immediate impact with a sensational goal, as Telford threaded a ball down the left for Grant and he delivered the ideal cross for Nouble to volley home a fabulous finish.

It was beautifully incisive from Argyle and an amazing start to Nouble’s Home Park career.

The visitors had no choice but to throw men forward for the final 10 minutes but Mike Cooper continued his solid display with impeccable handling from a succession of QPR crosses.

Panutche Camara replaced Mayor for the final exchanges and he quickly played his part in a spell of keep-ball from the Greens designed to frustrate Rangers. It worked superbly well and Ryan Law was added to the rearguard in place of George Cooper for the closing seconds.

Job done, game won, and the only negative was not having the Green Army inside Home Park to share in the success.