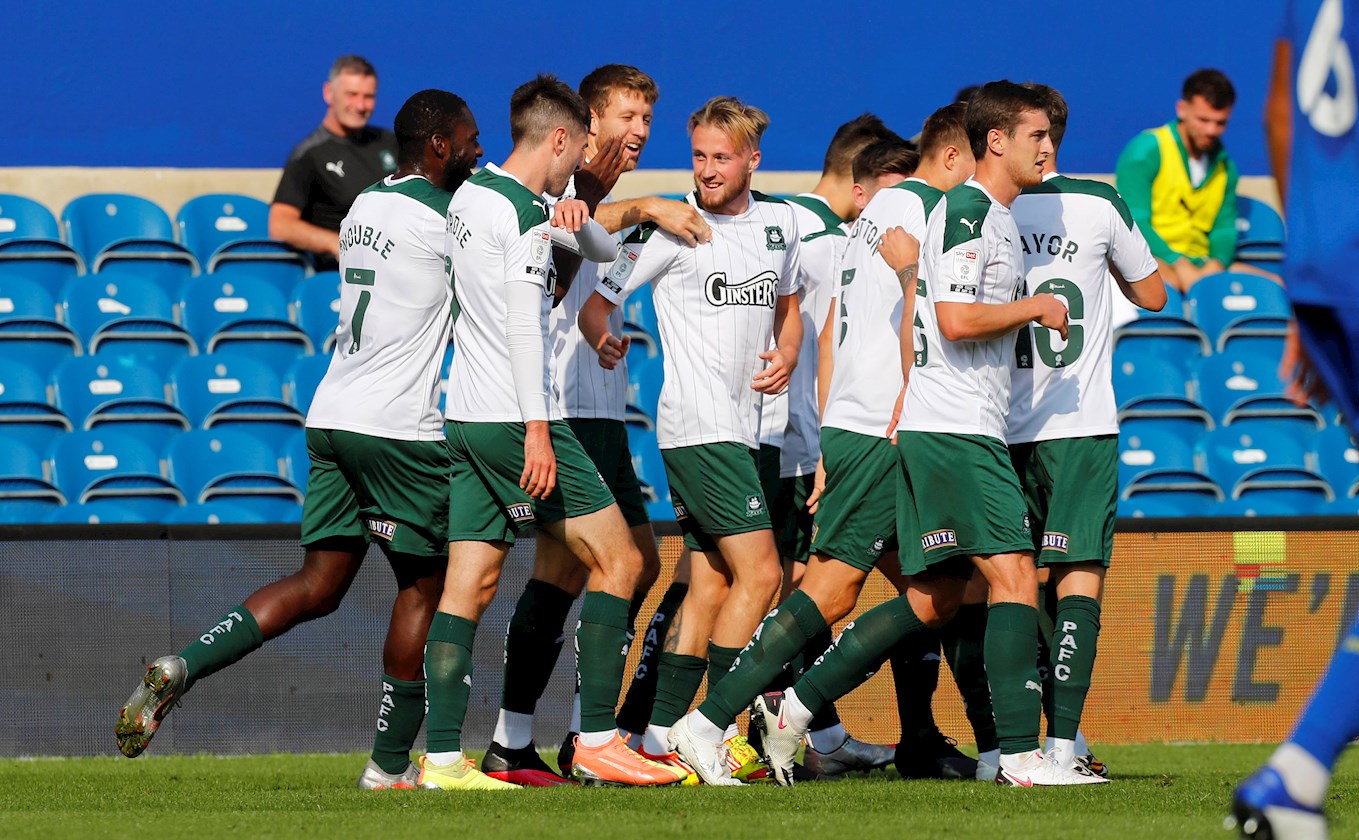 An amazing, extraordinary game of football saw Argyle lead twice, trail by two goals and still come away from AFC Wimbledon with a thrilling 4-4 draw.

It all started with a delicious curler from George Cooper, immediately cancelled out by Joe Pigott and then Conor Grant restored the Pilgrim lead at half-time with a wonder-strike from distance.

Wimbledon went wild at the start of the second period, equalising with a bundled effort from Shane McLoughlin and then Pigott executed a sublime free-kick to give the hosts a 3-2 lead. It seemed like game over when a clever goal from Ryan Longman extended that advantage.

Substitute Niall Canavan headed Argyle back into the mix from a Danny Mayor corner on 77 minutes and around 40 seconds later, another replacement, Dom Telford, made it 4-4 with a lovely finish from Grant’s astute assist.

Argyle boss Ryan Lowe made three changes from the frustrating 3-2 defeat at Leyton Orient in the Carabao Cup on Tuesday, bringing in skipper Joe Edwards for Byron Moore in the right wing-back position and the fresh legs of Grant for Panutche Camara in midfield.

The third switch came in attack, where the power of Frank Nouble was preferred to the guile of Telford, with Luke Jephcott still recovering from a knock sustained in the opening day win over Blackpool. On the Pilgrim bench, trainee Brandon Pursall was replaced by Ryan Law.

Wimbledon manager Glyn Hodges made just the one change from the side that drew 2-2 in an entertaining Sky Bet League One clash at Northampton Town last weekend, with new loan signing from Birmingham City, Connal Trueman, replacing Kiwi ‘keeper Nik Tzanev between the sticks.

The game opened with a mini aerial bombardment from the Dons, matched by solid defensive work from Scott Wootton and Kelland Watts, swiftly followed by a decent challenge from Will Aimson to complete a pleasing start for the rearguard trio.

Crafty midfield work from Mayor was the Argyle response in glorious sunshine at the Kiyan Prince Foundation Stadium, home of QPR, and Wimbledon’s temporary lodgings while their new stadium remains under construction.

The Pilgrims, playing in their Daz white away strip, were competing manfully in the engine room, with Grant and Lewis Macleod battling hard to provide a platform for Mayor & Co. to do their stuff in attack.

A slick channel ball from Cooper prompted a positive foray on 10 minutes, as Mayor turned Luke O’Neill inside out before a clipped cross to the near post was nodded narrowly wide by Ryan Hardie.

Argyle were turning the screw and dominating possession, as the Dons struggled to contain the left-side combo of Cooper and Mayor. A surge inside from Cooper ended with the ball bobbling into the feet of Nouble, who saw his stabbed effort on the turn deflected over a corner.

The Greens got their reward on 16 minutes and a sumptuous goal from Cooper, playing a short corner that was immediately returned to him by a loose Wimbledon foot, and the Pilgrim wing-back curled a beautiful finish into the top corner from a tight angle.

Frustratingly for Argyle, the lead lasted just over 60 seconds, as a routine free-kick found its way to Longman in the channel and he squared a pass for Pigott to slot past the stranded Mike Cooper from close range.

The leveller naturally provided Wimbledon with a boost in belief and Longman, on loan from Brighton, was hanging on the shoulders of Argyle’s back three in the hope of finding more space in the channels.

Hardie has a similar idea in the Argyle attack and his pace was always an option, although it was more fine work between Cooper and Mayor that created room for the number 10 to unleash a shot deflected over. The corner fell to Aimson, who had time for a touch before his effort was charged down by Pigott.

A decent cross from O’Neill picked out Pigott for a header steered wide just past the half-hour but the Greens were generally in control of defensive duties, particularly with Mcleod providing an impressive screen in front of the back three.

Argyle broke the minor shackles with a surging run from Hardie and his pass was perfectly weighted for Nouble to strike first time, forcing Trueman into a solid save, with Hardie’s rebound blocked by Terrell Thomas.

Grant then intervened with an absolute stunner to complete the half, cutting on to his left foot and whipping a rasping drive into the same top corner picked out by Cooper. It was a brilliant goal by the Pilgrim midfielder and just reward for a first period full of slick patient passing from the Greens.

Argyle continued their forward momentum immediately after the restart, as a ball over the top found Hardie to jink inside on his left foot and his curling effort required the full frame of Trueman to turn the shot wide.

The Dons then drew level for a second time, as a drilled cross from Nesta Guinness-Walker found McLoughlin bearing down on the near post to force the ball into the net after a ricochet off the arms of Mike Cooper.

Edwards reasserted some Argyle impetus with a delicious low cross for Hardie, which was forced over his own bar by the retreating Paul Kalambayi. The Wimbledon riposte was a low drive from Longman dragged inches wide of Cooper’s far post.

The dancing feet of Mayor kept the to-and-fro nature of proceedings intact but his rising drive cleared Trueman’s bar. A free-kick for the Dons from 20 yards continued the theme and Pigott delivered in style, curling a super finish into the top corner, that same overworked top corner from the first half.

Lowe instantly shuffled his pack, removing Edwards for Moore, but it was Pigott causing more concern, sneaking in behind Wootton for a flicked effort that thankfully slithered a fraction wide.

Canavan replaced Wootton for the final quarter but he was soon trudging back in disappointment with his defensive team-mates, as Pigott robbed Aimson and released Longman for a delightful dinked finish beyond the advancing Cooper.

Argyle had strong penalty claims waved away when Pigott clumsily felled Hardie after a searching Cooper free-kick into the box. Mayor tried to remedy the injustice with a superb drive from distance that cannoned back off the bar.

Mayor then threaded a pass wide for Moore but his cross carried a tad too much pace to pick out Nouble at the far post, as Telford then came on for Hardie in the final 15 minutes.

It was soon game back on and a terrific Mayor corner found the determined run of Canavan, who glanced a fine header into the corner of the net.

Unbelievably, celebrations were doubled within less than a minute, as a delicious cross from Grant picked out Telford unmarked in the box, and the substitute followed Canavan’s example with an assured volleyed finish past the exposed Trueman.

Argyle were suddenly all over their hosts, as a step-over and shot from Nouble forced Trueman into a fingertip save to turn the ball wide.

Neither side had thoughts of settling for a draw in the closing stages of an enthralling encounter and a fabulous cross from Cooper in the opening minute of injury-time found Telford for a diving header flashed agonisingly wide of the post.

Game over, and what a game.

This is why we all love football.