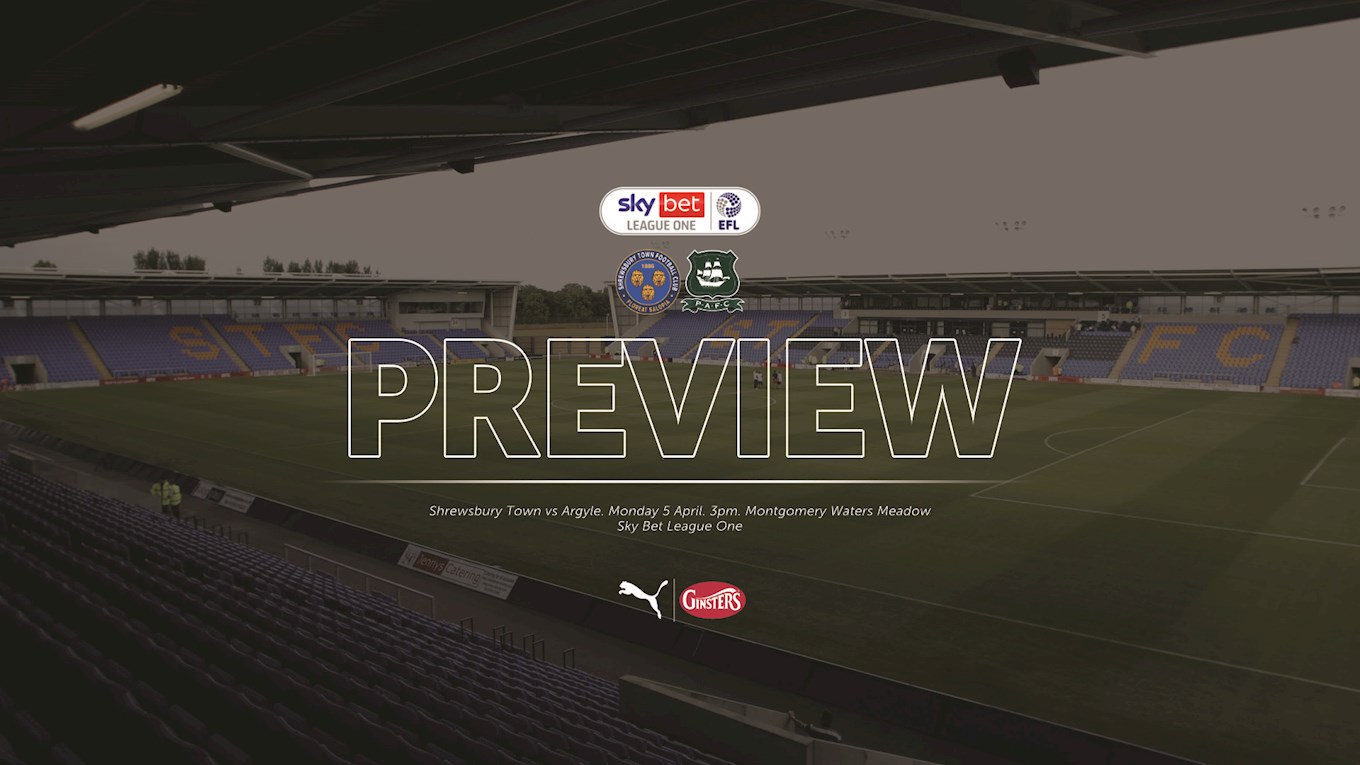 Having secured a crucial Good Friday victory, the Greens travel to Shrewsbury Town on Easter Monday on a three-game unbeaten run.

Ryan Lowe’s men put in a dominant first-half display against AFC Wimbledon at Home Park, and Sam Woods’ first goal for Argyle gave the Pilgrims a deserved lead in at the interval. Despite a second half fightback, the Dons were unable to find their way beyond a resolute and determined Pilgrim back-line.

Salop currently lie in 17th position in the Sky Bet League One table, having lost their last two fixtures – the most recent coming at the hands of Northampton Town at the PTS Academy Stadium.

A 27th minute effort from Northampton’s Ryan Watson, who also netted against the Pilgrims in recent weeks, was the difference between the two sides.

The defeat followed a home reversal against play-off chasing Portsmouth, where first half goals from Marcus Harness and John Marquis put Pompey two up, before Town pulled one back through full-back Nathanael Ogbeta.

In our reverse league at Home Park way back in September, the sides played out a 1-1 draw, with both goals coming in the first half. Josh Vela put the Shrews ahead in the 14th minute with a strike from the edge of the area, before Conor Grant levelled the scoreline with an angled finish from just outside the box.

Salop have also reportedly been without Scott Golbourne since the beginning of March, and former Pilgrim Leon Clarke since January. Daniel Udoh was absent from Salop’s meeting with Northampton due to the birth of his child, but should be available for selection again on Monday.

For Argyle, George Cooper is the Pilgrims’ only long-term absentee, and is currently undergoing a rehabilitation programme at Home Park after knee surgery, while Gary Sawyer is edging closer to full fitness.

Fulham loanee Jerome Opoku has served his two-match ban for accumulating 10 yellow cards, and will be eligible for selection.

Ryan Lowe: “We’ve got seven games to go, so there’s 21 points to play for, we’ve got to keep climbing the table as much as we can, keep picking up points, and start enjoying the games more.

“The squad is looking fresh, but we’ve got to recover them and have a game plan ready for Monday. We’ve just got to keep believing and keep building. We just want to keep winning games of football.”

Aaron Wilbraham (Shrewsbury Town assistant manager): "Plymouth have turned results around and built up confidence. We need to go into the game and do the things that we do well. We want to bounce back from our last result and earn the win. They have some dangerous players and we have to be on our guard. We always look at the other team's danger men and try to assess what we can do.

"We have done our homework as we always do and we are looking to earn the win. We don't like losing and they've made a good habit of not getting beat. The lads are determined to put things right and we have to take that into the game tomorrow."

ARGYLE AWAY TO SHREWSBURY TOWN IN THE EFL

Jimmy Rae’s Greens moved a point clear at the top of Division 3 South table in this fixture.

George Dews, Maurice Tadman and Paddy Ratcliffe scored our goals in what was a fourth successive victory. Argyle went on to win the divisional title that season and secure promotion back to Division 2 after a two-year absence.

Biggest win: The 3-1 victory on our first visit (see above) is still our best win at Shrewsbury.

Most goals in a single game: The clubs have shared five goals on three occasions.

The first time was on 7 February 1995, when Steve McCall’s Argyle lost 2-3 in the Second Division.

Kevin Nugent gave us the lead after 21 minutes but was then sent off ten minutes later. The home side scored three times in the second half before Mickey Evans netted a consolation goal on 86 minutes.

Just over two years later, on 15 March 1997, it was our turn to win this Second Division fixture 3-2. Mick Jones’ charges took the lead through Chris Billy on 52 minutes, only for Town’s Steve Anthrobus to equalise a minute later. Billy restored our lead on the hour mark, but Ian Stevens (72) made it 2-2. Our win came courtesy of Neil Illman three minutes from time.

The last time was on 12 September 2000, when Kevin Hodges’ Argyle were beaten 4-1 in the Third Division. Midfielder Jason Peake scored at both ends, while Adam Barrett was red carded on 88 minutes.

Monday's Sky Bet League One fixture at Montgomery Waters Meadow kicks off at 3pm, and is available to stream live, and worldwide, on iFollow Argyle. Click here to purchase your pass.