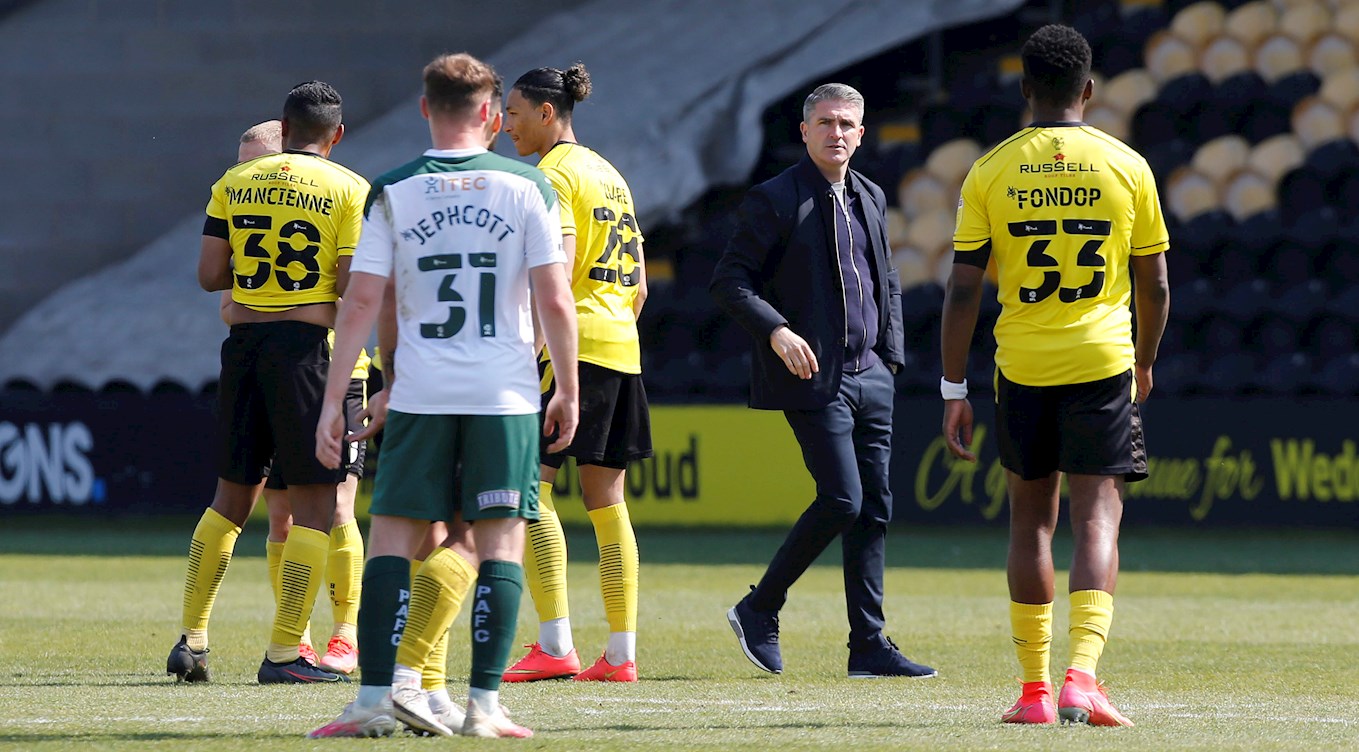 Despite conceding a last-minute equaliser in their Sky Bet League One draw at Burton Albion, Argyle manager Ryan Lowe was heartened by the team’s overall performance on Saturday lunchtime.

Ryan Hardie gave the Pilgrims the lead midway through the second half with a sublime lob over goalkeeper Ben Garratt, before substitute Ryan Broom netted deep into stoppage time to salvage a draw at the Pirelli Stadium.

Lowe said: “The performances were a lot better. I thought the performance against Hull was good but individual errors cost us. A lot better than Shrewsbury.

“We knew what we were coming up against in Burton Albion. Every time there’s a throw-in, it’s coming in your box, wherever that’s from. We dealt with that, we competed really well, and we probably should have scored a few goals before the break.”

The Greens were forced to into a physical battle against Jimmy Floyd Hasselbaink’s reinvigorated Brewers outfit, who were coming off the back of three impressive wins. They were on course for a highly-satisfying victory until the third minute of four added on, when their defensive wall was finally breached.

Lowe said: “We’re disappointed, because the lads definitely deserved three points, but it wasn’t to be. It’s a point, it’s a point that you’ll take. You want all three, but they’ve been doing well, Burton, and all we can do is go on to the next one.

“We had some great chances, but it wasn’t to be. Ryan’s great finish, he deserved that for all his work ethic. It’s small margins, isn’t it? Was it out, from the throw-in? We don’t know. Can we play the ball in behind a little bit more when there’s only 60 seconds to go?

“The lads were excellent in everything that they’ve done, first and second contacts. We’re disappointed with the goal, but I thought we worked ever so hard to get the three points.

“Ultimately, the performance was a lot better than it has been, the desire and commitment was there, which I’m pleased about, and we got a point.”

Goalscorer Hardie was the only change to the starting eleven from the defeat against Hull City seven days earlier, with Lowe opting for a robust and experienced side to match up with the Brewers.

Lowe said: “Some people don’t really see it, do they? They don’t really see what Jimmy Floyd Hasselbaink and Dino Maamria’s teams are about. Do I throw two or three young kids in today and they get bullied and battered and bruised and never play again?

“We can’t just make wholesale changes when you’re coming up against a team like Burton, and Charlton, Sunderland, Gillingham, Oxford – they’re all big games. I’m not just going to make four or five changes so people can be smiling and happy about it – I’m going to do it for the right reasons for this football club.”

The point takes the Pilgrims to within touching distance of mathematical League One safety with games to go – but Lowe is keen for his players to continue to compete hard for the remaining 12 points.

“We’ve got to do it for a bit of personal pride, as well as for the football club. That’s our message to all of the players from now until the end of the season – keep going, keep performing to the best of your ability, and see where it takes you.”