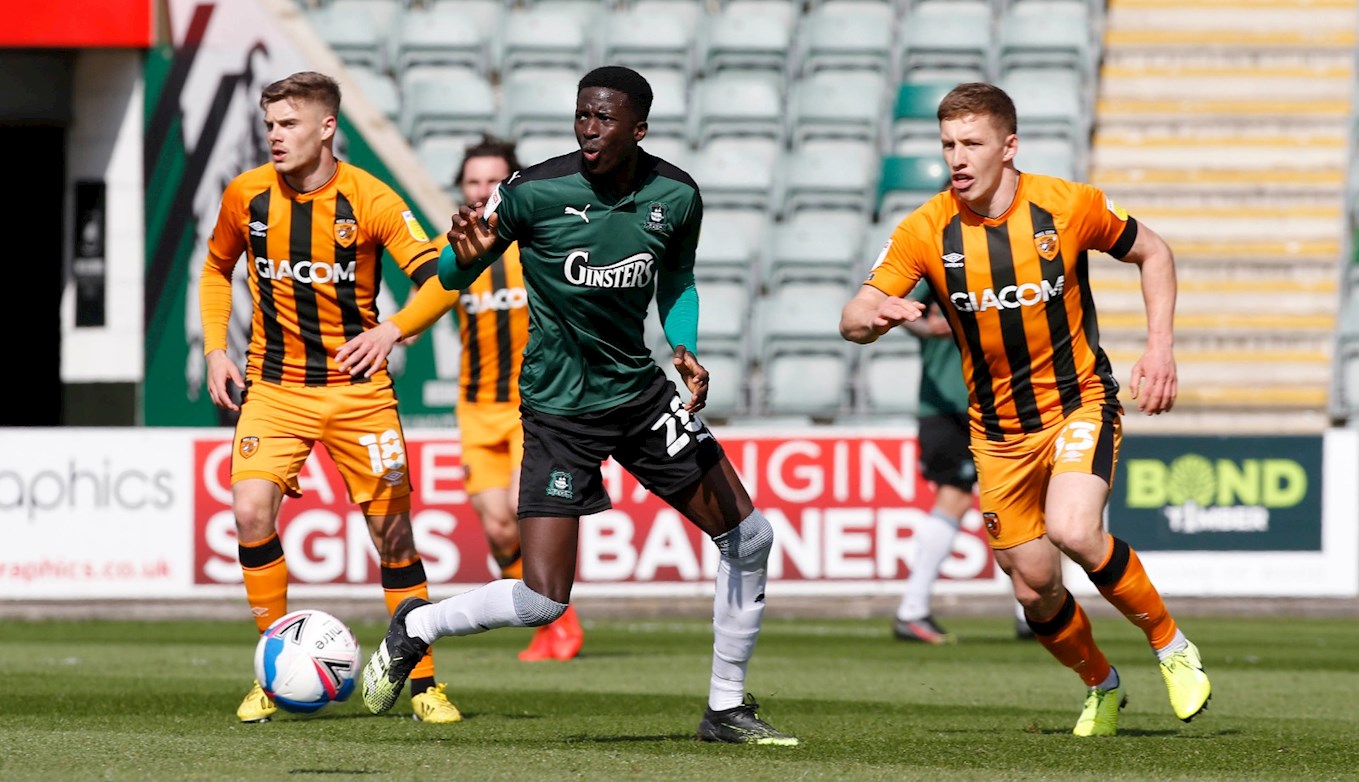 League leaders Hull City produced some clinical finishing to inflict a 3-0 defeat on Argyle in the Home Park sunshine.

Keane Lewis-Potter broke the deadlock on 12 minutes and second-half strikes from Josh Magennis and Greg Docherty confirmed all three points for the promotion-seeking Tigers.

Argyle boss Ryan Lowe made two changes from the loss at Shrewsbury, with Adam Lewis and Luke Jephcott replacing Conor Grant and Ryan Hardie, plus a return to the bench for Lewis Macleod, while Hull manager Grant McCann stuck with the same 11 that beat Northampton 3-0 on Easter Monday.

The Tigers were first to threaten, forcing Mike Cooper to punch clear a dangerous corner but the ball was returned to the box for George Honeyman to lash wildly over the bar from the left channel.

After a period of patient passing football from the Pilgrims, a quick free-kick by Hull gave Mallik Wilks time to thread a pass into the path of Lewis-Potter on the left side of the penalty area and he stroked an assured low finish across Cooper to nestle in the far corner.

Argyle responded with a swift counter started by Danny Mayor and a drilled Lewis cross found Niall Ennis, but he was unable to turn for an effort to test Hull ‘keeper Matt Ingram.

A header from the dangerous Wilks flashed wide following a Callum Elder set-piece but, in general, Argyle had settled into spells of possession in the Hull half, although Cooper did make a strong low save to his right after a searing drive from Greg Docherty.

The Greens replied with a delightful cross from Lewis picking out Panutche Camara, who saw his initial shot blocked, with Tyrese Fornah hitting the rebound first-time and Ingram was at full stretch to turn the ball wide.

A superb Jerome Opoku tackle thwarted Wilks when he looked to pull the trigger from 10 yards but Argyle were the side pressing at the end of the half, with a Lewis cutback falling to Jephcott for a strike saved at the near post by Ingram. Watts then headed wide from a Camara cross.

Hull restarted with a Magennis header glanced wide from a near-post corner and Argyle replied with yet another inviting low cross fizzed in by Lewis, which just eluded the runs of Jephcott and Ennis.

A fabulous move down the left saw Ennis release Mayor, who was in position for a shot when Alfie Jones just got a foot on the ball. Sadly, the Tigers doubled their lead moments later, as Honeyman pinched the ball in midfield to slip a pass for Magennis to steer a low shot beyond Cooper.

Wilks rifled over the bar as Hull looked to grab a killer third and Magennis then rounded Cooper from a Lewie Coyle pass but the angle thankfully prevented the Northern Ireland international from finding the net.

Argyle looked to respond with a succession of crosses into the Hull box but the visitors dealt with the situation, breaking at pace for a decisive third. Lewis-Potter found room on the left and squared an ideal pass for Docherty to rifle the ball into the bottom corner.

The Greens made a triple change, introducing Byron Moore, Ben Reeves and Hardie for Watts, Camara and Jephcott, matched by three substitutions for the Tigers.

Mayor had a shot deflected into the grateful arms of Ingram as the Greens kept plugging away for some reward, with Macleod and Klaidi Lolos given a late run in place of Fornah and Ennis.

It was, however, Hull City’s day in the sun.