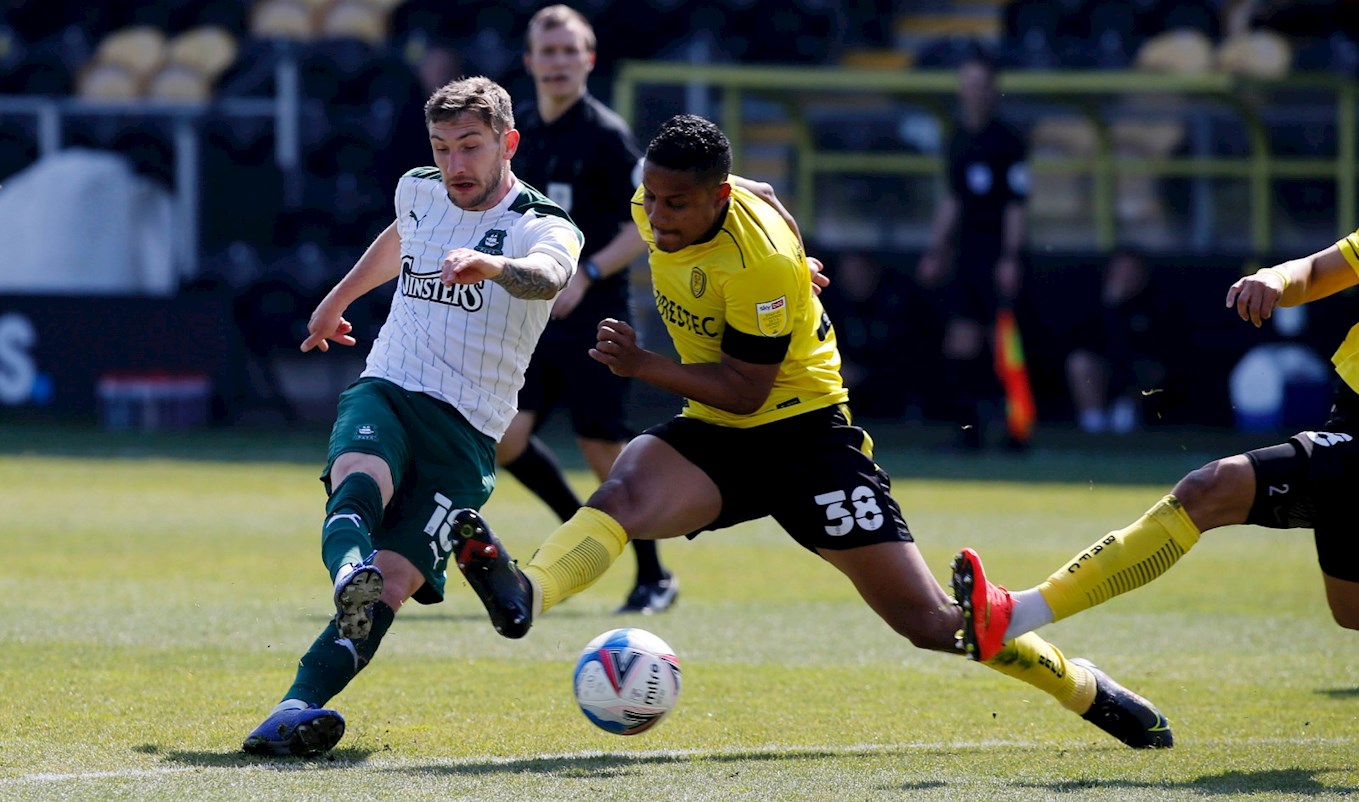 A fine display from the Pilgrims was seconds away from securing a well-earned three points thanks to a delightful controlled finish by Ryan Hardie midway through the second half.

Argyle had sucked up pressure from Burton Albion and generally created the better chances, but were hit by a last-minute equaliser by substitute Ryan Broom.

Argyle manager Ryan Lowe made one attacking change from the defeat to Hull City, withdrawing Luke Jephcott for Hardie, and Ryan Law returned from a loan spell at Torquay to take a place on the bench. Burton boss Jimmy Floyd Hasselbaink also made one switch from the win at Doncaster, replacing Joe Powell with Danny Rowe.

A lively start in the Burton sunshine saw Mike Cooper comfortably hold a low drive from Kane Hemmings and then tip wide an ambitious raking drive by left-back Tom Hamer.

The Brewers conjured another half-chance on nine minutes, when a looping set-piece was nodded goalward by Hayden Carter but the effort was plucked from the sky by an alert Cooper, as Argyle replied from a corner of their own, whipped over by Danny Mayor, forcing goalkeeper Ben Garratt to punch clear.

A beautiful threaded pass from Hardie released Niall Ennis for a run on goal but credit to Garratt for racing off his line to save with his legs. Burton replied with a John Brayford header tipped over the bar by Cooper.

The industry of Hardie and Joe Edwards created room for Mayor to have a shot deflected wide, swiftly followed by a dipping Adam Lewis cross that very nearly picked out the run of Will Aimson.

Loose play in a dangerous area presented Hemmings with a great chance on 25 minutes but Cooper kept his goal intact with a brilliant save. Equally impressive work from Ennis at the other end saw him latch on to a flicked header but, after stumbling past Garratt, Carter managed to recover for a crucial block.

Argyle were slowly taking control of proceedings, playing some lovely patient football, but without finding the decisive breakthrough, with Garratt making another good save to deny Ennis from the right channel.

The second period opened with volley hooked wide by Brayford following a long throw from Hamer but Argyle soon settled through a spell of calm possession, and there was a mild penalty shout for a clumsy challenge on Joe Edwards from a Kelland Watts delivery.

The game then descended into a midfield battle, with plenty of endeavour but little in the way of clear-cut chances, and credit to the Pilgrim defence for a resolute display at the Pirelli Stadium, superbly backed up by a mature performance from Cooper.

Argyle finally broke the shackles with 20 minutes remaining and a fabulous lobbed finish with the left-foot of Hardie after the ball had been scooped over the Burton backline. It was a sublimely controlled effort from the young Pilgrim and reward for a terrific hardworking display.

Jephcott replaced Ennis for some fresh legs in attack, as the Pilgrims continued to show resilience in their defensive work, combined with tireless running all over the park, a point typified by the impressive Aimson.

Byron Moore came on for Hardie in the final 10 minutes, as the hosts also rang the changes, but it remained Argyle in the ascendancy, with responsible covering from Mayor, Tyrese Fornah and Panutche Camara a key factor in the engine room.

Brave defending from Edwards guaranteed more frustration for the Brewers and the Greens managed the game beautifully until a cruel ending, with Broom tapping home a leveler in the dying seconds.