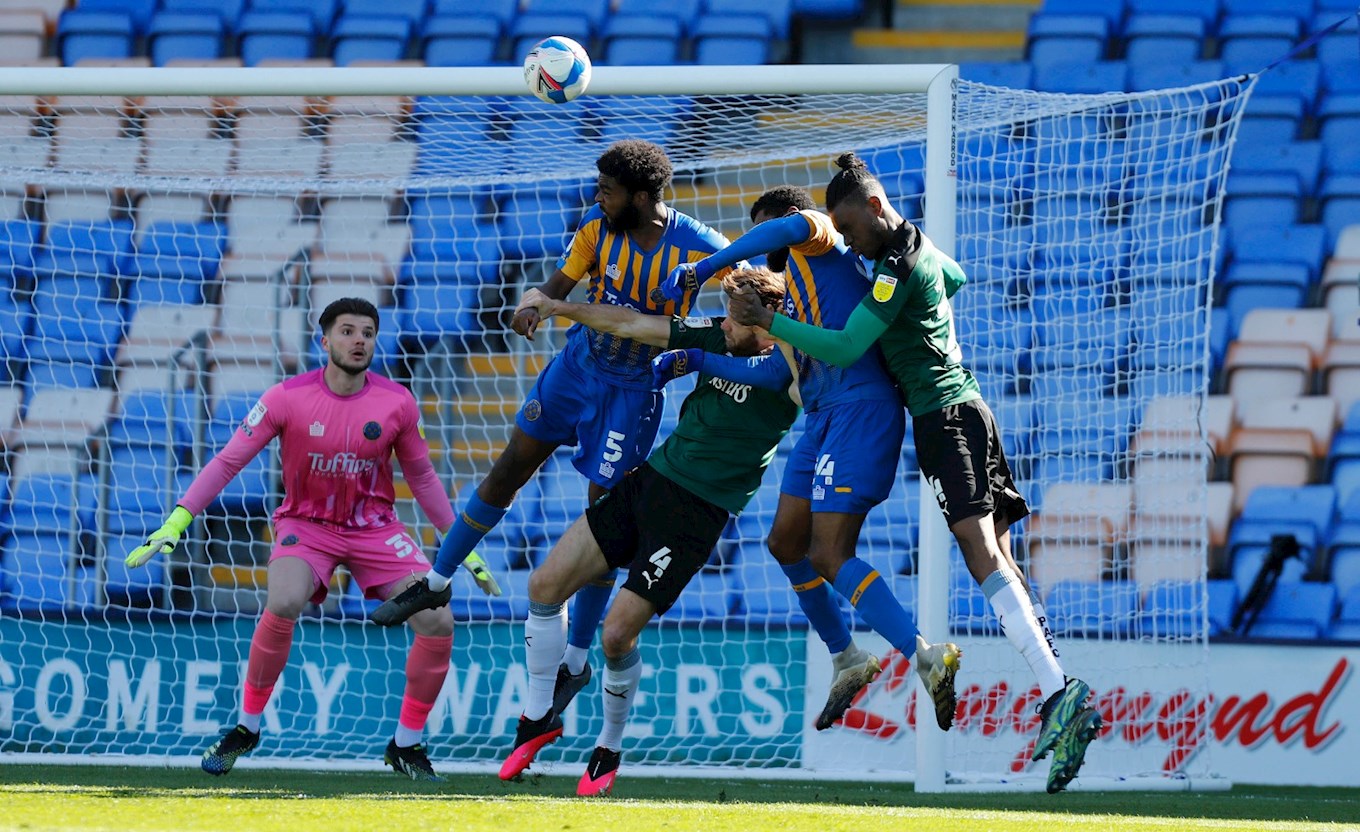 Three second-half goals condemned Argyle to a scruffy defeat in a game that never really saw the Pilgrims find their normal attacking verve.

The blustery conditions were hardly conducive to flowing football but there was nothing between the sides until Shaun Whalley opened the scoring via a huge deflection on 52 minutes.

Whalley added his second after a defensive mistake from the Greens and a frustrating Easter Monday was completed by Nathaniel Ogbeta steering a neat effort into the corner nine minutes from time.

Argyle boss Ryan Lowe made two changes from the Good Friday victory over Wimbledon, with match-winner Sam Woods missing out through injury to be replaced by Jerome Opoku following his two-match suspension. Kelland Watts also returned to the side after a hip injury, bumping Adam Lewis down to the bench.

Shrewsbury made four changes from the 1-0 loss at Northampton, bringing in Sean Goss, Whalley, Dan Udoh and Matthew Pennington for David Davis, Harry Chapman, Curtis Main and Aaron Pierre, although he was only withdrawn after a knock in the warm-up, with Ro-Shaun Williams restored to the side after previously dropping to the bench.

Argyle immediately tested the reshuffled Shrewsbury defence with a clipped free-kick from Conor Grant, cleared under pressure by Ethan Ebanks-Landell on a breezy afternoon in Shropshire.

Even in the early exchanges, Danny Mayor was attracting plenty of attention from the home side, with the Shrews often doubling up on Argyle’s number 10. At the other end, a combination of Opoku and Watts successfully thwarted a right-wing run from Whalley.

A dancing run from Ogbeta saw the sprightly wing-back weave inside from the left and squeeze a pass to Whalley, who was denied a shot on goal by assertive defending from Will Aimson, blocking the effort to keep Michael Cooper’s gloves blissfully clean.

The Pilgrims responded by settling into a period of controlled possession but the play was generally a scrappy battle. The hosts did win a free-kick that skewed off the leg of Tyrese Fornah and Cooper was alert to the unexpected deflection, turning the ball wide at full stretch.

Shrewsbury continued the mini set-piece bombardment with a brace of corners, the second of which fell to former Pilgrim Ollie Norburn on the right side of the penalty area and his low shot was dragged narrowly wide of the far post.

Argyle came back with Mayor finding rare room down the middle and slipping a pass wide for Watts, rampaging forward from left-back, for a low drive that ricocheted to safety off a Shrewsbury boot.

While the Pilgrim front pair of Niall Ennis and Ryan Hardie were being very closely marshalled by the home defence, Mayor was beginning to rise in prominence, although both sides were working hard to find rhythm in the strong wind.

Terrific feet from Mayor and Grant, aided by the determination of Watts, won Argyle a corner on the half-hour. Mayor delivered the deep cross and Aimson asked a polite penalty question after being sandwiched while jumping for the header.

In a first half bereft of chances, Aimson, in particular, was imperious at the back for Argyle, and one more towering header allowed Mayor to run through the middle and the ball was clipped to the back post for Joe Edwards to nod down to Panutche Camara, but he was shuffled away from the box before being able to unleash a shot.

The half ended with a flicked header by Udoh from a long punt forward and Whalley reacted first for a half volley fired over the bar from a difficult angle on the left. In truth, it was 45 minutes dominated by the wind.

Argyle came out firing from the restart, with Mayor picking up on a Hardie pass to surge through the middle and feed Ennis for a smart left-foot shot on the turn, brilliantly saved by the outstretched hand of Matija Sarkic.

It proved to be a crucial block from the home custodian, as Shrewsbury took the lead a few minutes later, with Whalley cutting inside from the left for a low shot that took a massive deflection off Edwards, looping beyond the dive of Cooper and into the far corner of the net.

A fine block from Opoku denied Shrewsbury a quickfire second and the subsequent corner was acrobatically thumped clear from under his bar by Cooper. Opoku then got his body in the way of a thumping drive from Ogbeta.

Argyle reacted with a formation change, moving Grant wide left for the familiar 3-5-2 system under Lowe. The Greens settled into a spell of patient passing, looking to conjure an opening against a compact Shrewsbury side.

Mayor sought to find the answer with a customary weaving run and pass inside for Hardie, who was quickly swamped by a tackle from Pennington. Argyle aimed to build further momentum with fresh legs up front, withdrawing Hardie and Ennis for a duo of Academy graduates in Luke Jephcott and Klaidi Lolos.

As if to highlight the impact of the wind, a corner from Sean Goss caught a heavy gust to clip the bar on its way over, as a scruffy game entered the final 20 minutes with a run and stabbed shot wide by Ogbeta.

The Pilgrims made three more changes on 75 minutes, introducing Ben Reeves, Byron Moore and Lewis for Edwards, Fornah and Camara, although the Greens were almost immediately two goals down, as Whalley pounced on a loose backpass to slide a comfortable finish past Cooper.

The Shrews then replaced Udoh for Main, as Argyle faced a mountain to climb in the final 10 minutes. The mountain became insurmountable when the impressive Ogbeta curled a lovely finish into the bottom corner from 20 yards.

Davis, Rekeil Pyke and David Edwards replaced Goss, Whalley and Donald Love for the last knockings, but Argyle will need to regroup in preparation for the visit from high-flying Hull City on Saturday.