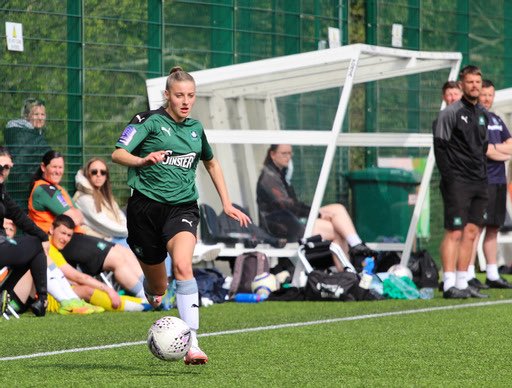 Plymouth Argyle Women progressed to the semi-finals of the Devon Women’s Senior Cup after beating Bideford 5-0 at the Manadon Sports Hub.

The Pilgrims had to show patience before breaking down the resilient Robins but then turned on the style with four goals in the second half.

After a long, difficult season for everyone, it is now a fantastic opportunity for Argyle to grab some silverware, with Exeter City, Marine Academy Plymouth and Buckland Athletic completing the semi-final quartet.

“We just wanted the girls to relax and enjoy being out on the pitch again,” said manager Ryan Perks. “This is a competition we want to win and the players showed that.

“We started a little slow but, once the game settled down, the girls played some excellent football and scored some terrific goals, so a very pleasing outcome. Once the first goal went in, we relaxed and enjoyed the occasion.”

After squandering early opportunities, Immy Crawford broke the deadlock with a rasping 25-yard drive midway through the first period and the scoring floodgates opened in the second period.

Sophie Buchanan was denied by a good save five minutes before the interval but there was no denying Argyle immediately after the restart, putting together a fine team move that was finished off by Buchanan.

Substitute Emily Mousley made the ideal introduction with a third goal on the hour, moments after hitting the bar, as she slotted home the rebound when Amy Wise’s initial effort had been saved.

The Greens made it 4-0 on 78 minutes, moving the ball quickly through the middle for Rosie Shipp to convert and Mousley added late gloss to the victory with a late fifth.