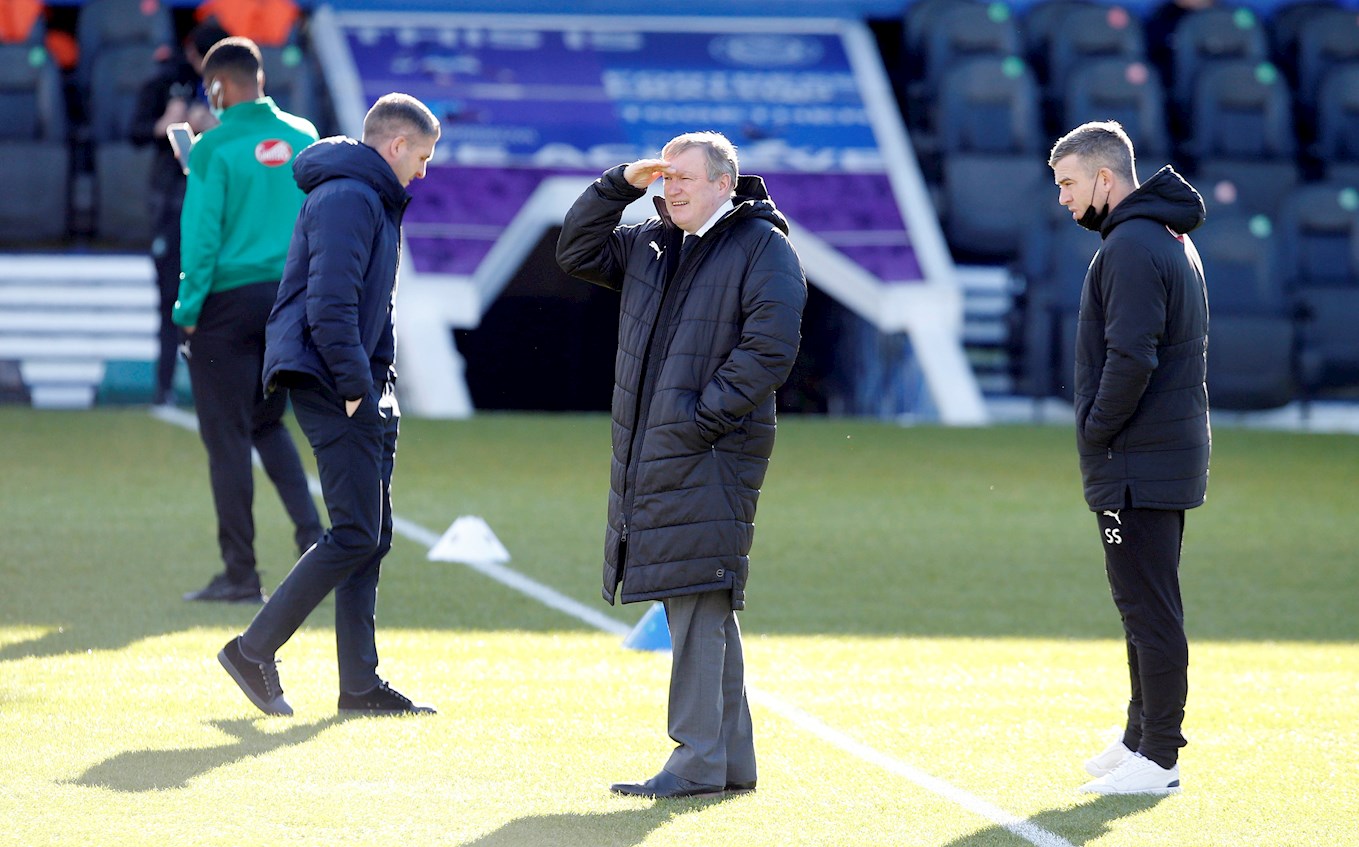 While the Pilgrims’ first team has enjoyed a tremendous start to 2021, Argyle Director of Football Neil Dewsnip remains firmly focused on the long-term picture at Home Park.

With the Greens sitting comfortably in the top-half of the Sky Bet League One table, Dewsnip has turned his attention to staff development - using his jam-packed rolodex of contacts to facilitate networking sessions with some of the game’s highest-profile names.

In recent weeks, Neil has lined up a one-to-one session for Argyle manager Ryan Lowe with England manager Gareth Southgate, as well as a similar meeting between the Pilgrims’ assistant manager, Steven Schumacher, and Southgate’s number two, Steve Holland.

Dewsnip said: “I managed to arrange a call with Gareth and Ryan and I was the compere in the middle. Like with Steven [Schumacher] and Steve [Holland], it was fascinating to listen to Gareth and Ryan talk - particularly about leadership and management. It felt like sitting in a really comfortable environment, talking football with friends.

“I'm sure Ryan got lots in terms of leadership and management lessons, and it was great to see that Gareth was able to reinforce that Ryan’s practices and leadership philosophies are in line with his own."

Holland, whose coaching CV boasts a Champions League-winning spell as assistant manager at Chelsea, as well as roles with the England under-21 and senior side, had initially agreed to deliver a Zoom session with the Pilgrims’ Academy staff, before kindly joining Neil and Schuey for a similar one-to-one session.

Dewsnip said: “Steve talked about his journey from his early days at Crewe Alexandra, and the fact that he coached at every single age group from six all the way through to the seniors. Obviously, right now, he's coaching some of the best players in England, if not the world.

“The insight into his coaching journey and his philosophies across all the age groups was absolutely mind-blowing for our Academy coaches, and there was a fantastic turnout - as you would hope and expect. Hopefully, they have been inspired further to support those lessons from Steve back into Argyle’s development programme, which will be incredibly beneficial.

“To listen to him and Steven talk to one another and ask questions and bounce issues around was fascinating for me, let alone what it was like for Steven. So, in terms of Steven’s development pathway, it will be incredibly beneficial and hopefully inspirational.”

These sessions form the beginning of an ambitious continuous professional development (CPD) programme that Dewsnip, a former teacher, hopes will underpin the Pilgrims’ culture in years to come.

Neil said: “We have individual action plans for every member of staff across the football departments. And, basically, the challenge is that none of us accept that we are the finished article, and that we all want to improve and get better. This is a topic very close to my heart and my background, really, in terms of education.

“That mindset is present throughout the staff at Argyle - from Ryan, all the way down. Ryan and Steven, for example, are only into their third year, as managers and coaches individually. So, they obviously recognise that they've got an awful lot to do to become the best that they can possibly be. Hopefully, in ten years’ time, they'll be pretty special at what they're doing.

“Having Gareth and Steve speak to our first-team management is a great start to our CPD programme, but members of staff in the other specialisms in our club have already asked me: ‘Neil, who have you lined up for me?’. So that's the challenge for me, but a great challenge. To have that kind of quality of person helping our staff here at Argyle makes me very proud.”

While providing guidance throughout the club is one element of Dewsnip’s wide-ranging role, it is not the sole focus, with the Pilgrims' Academy a key focus.

Having completed the framework of the restructure in 2020, which included implementing a playing philosophy across all age groups which mirrors that of the first-team, Neil is encouraged by progress made so far.

A number of young Academy scholars have already made their first-team debuts under Lowe this season - including Brandon Pursall, Finley Craske, Ethan Mitchell and Scott Crocker - while the Pilgrims’ under-18 side, led by former Yeovil Town manager Darren Way, are on the brink of qualifying for Merit League 1 for the first time since the youth leagues were overhauled.

Neil said: “If the next couple of games go well, they'll do that [qualify for Merit League 1]. But even if they weren't to qualify, I'd like to compliment Darren and Jamie Lowry [under-18 Coach], on their work.

“Max Whittingham, who joined that group of people kind of at the start of the season, has given us some really top-class sports science work to help the players develop. The Academy structure is in place, and that’s led on a day-to-day basis by Phil Stokes [Academy Manager], and it appears to be working well.

“They've created a really good environment, which is conducive to players jumping out of the under-18 team and go on a similar journey, hopefully, to the ones we have seen with Luke Jephcott and Michael Cooper.”

The development of Academy graduates Jephcott and Cooper serve as a benchmark for all prospects in the Argyle youth system - an case study in what can be achieved with appropriate attitude and application.

Neil said: “As a football club, we're desperately supportive of our young players getting an opportunity to go on the journey that Luke and Michael are making quite nicely at the moment.

“We obviously have an owner who believes in that, a director of football who definitely does, and a manager who is bold enough to give them the opportunity if he thinks they're good enough. – and the evidence is that he does that on a quite regular basis. So, there is opportunity there that that's key for any young players.

“The added ingredient that we have right now is that we don't just have one role model for them to look up to. We have two, at the moment, at different ends of the pitch, with more coming through.”

“Luke has, quite rightly, received a lot of plaudits this season for the goals that he scored. He does more than score goals, I believe he is improving as an all-around general player as well.

“And then, at the other end, we have got a young goalkeeper in Mike Cooper, and goalkeepers tend to develop quite late. Well, we've got one who appears to be developing quite early, and quite nicely.

“Ryan put his trust and faith in Michael, a very, very brave decision that was supported by everybody in the club. Michael has taken that opportunity and seems to be flourishing.”

While Jephcott and Cooper can now be considered first-team regulars, the club is also working hard to bridge the gap for young professionals who are not quite ready for the rigours of regular first-team football.

Neil said: “A part of our Academy strategy is that, if players are not quite ready to play first-team football week-in, week-out, we feel very strongly that part of that journey is to go out on loan, which Kevin Nancekivell is very heavily involved in. Adam Randell is an example of that – he’s doing very nicely at Torquay United, and he will return a better player for Plymouth Argyle.”