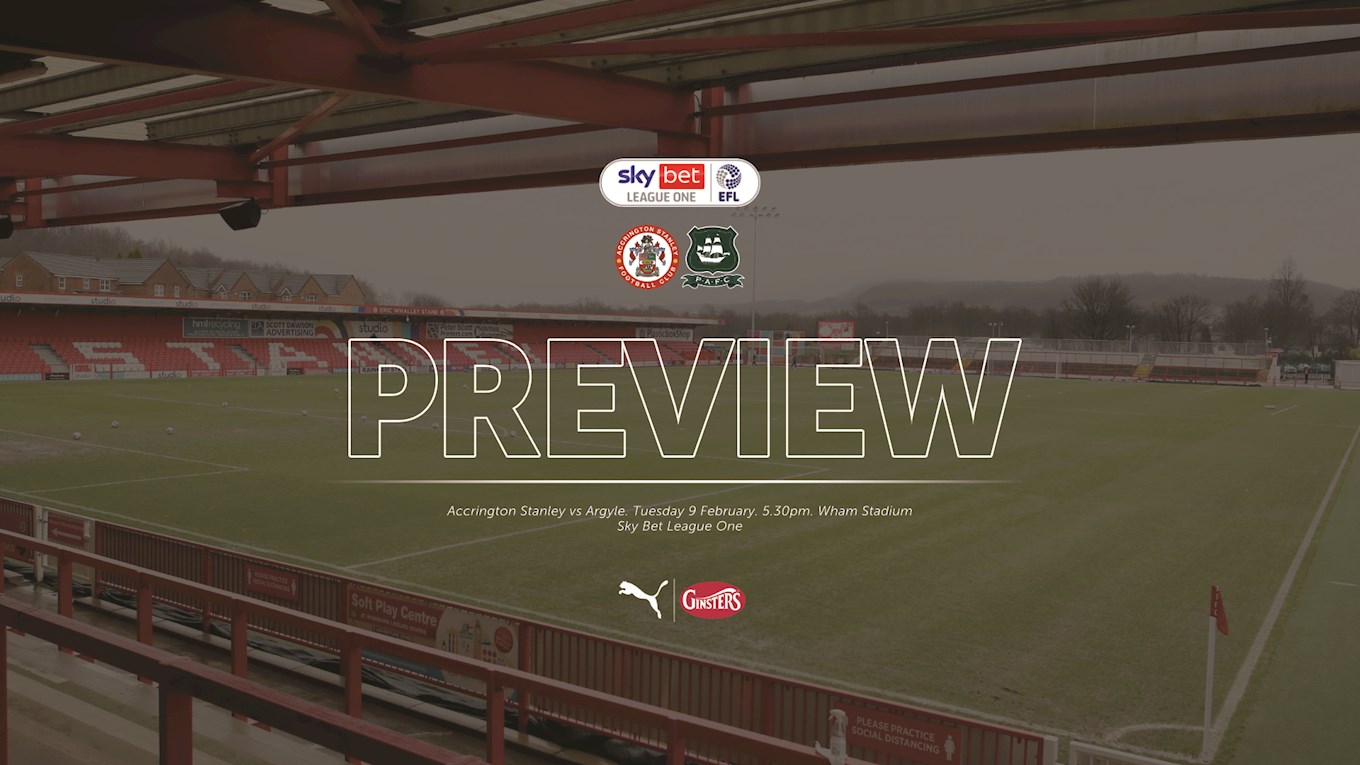 Ryan Lowe’s Pilgrims head back up the road for another long-haul away trip to Accrington Stanley on Tuesday night.

The Pilgrims are six games unbeaten in the league, a run which encompasses the entirety of the current calendar year, with their only defeat in 2021 coming at Premier League Sheffield United in the Emirates FA Cup.

Argyle will be looking to build on their strong away form, which includes impressive wins at Huddersfield Town, Sunderland and Swindon Town in recent weeks.

Last time out, at Fratton Park against promotion-chasing Portsmouth, Lowe’s men looked to be on the way to another superb win, with two second-half goals from the division’s leading goalscorer, Luke Jephcott, putting the Greens 2-0 with less than 10 minutes to go.

However, Ronan Curtis pulled one back for Pompey in the 86th minute, and and James Bolton’s header one minute later snatched away a memorable victory for the Greens – with the draw elevating them to 12th in the Sky Bet League One table.

Since the Greens met Stanley at Home Park 10 days ago, John Coleman’s side have played out two home fixtures, with the first seeing them put six past Paul Tisdale’s Bristol Rovers.

An 8th minute goal from Joe Pritchard, on target in the 2-2 draw at Home Park, set the tone, before Rovers briefly drew level. Only a minute passed before Stanley were back in front through Dion Charles, who fired his second past Rovers keeper Joe Day just five minutes later.

Colby Bishop bagged a brace, one goal before half-time and the second three minutes after the interval, to give the hosts a four-goal advantage, before Charles rounded off the scoring, and his hat-trick, on 70 minutes.

Last time out, Stanley played out a 0-0 draw with struggling Northampton Town, with Pritchard dismissed late on for a second bookable offence, which leaves him suspended for Tuesday night’s encounter. Matt Butcher is a doubt too, having missed Saturday's game through injury.

For the Pilgrims, Joe Edwards is a doubt, having missed out at Portsmouth on the weekend, leaving influential midfield colleague Danny Mayor with the captain’s armband. George Cooper is still recovering from knee surgery, whilst club captain Gary Sawyer and midfielder Lewis Macleod are both making continued progress in training, with a return to the match-day squad in their sights

ARGYLE AWAY TO ACCRINGTON STANLEY IN THE EFL

The bare facts are that Jack Rowley’s team drew 1-1 at Stanley’s old Peel Park ground, with winger Harry Penk scoring our goal after just 15 minutes. Much more importantly, however, the point gained in this match secured Argyle’s promotion back to the second tier of English football after a three-year absence.

Our last visit to the Wham Stadium is not one that Argyle fans will recall with any fondness. Derek Adams’ last game in charge saw the Pilgrims lose their final League One away match of the season by five goals to one on a miserable afternoon. Our goal came courtesy of Stanley’s Mark Hughes in the third minute of injury time at the end of the match.

Relegation-threatened Argyle were fast out of the blocks and found themselves 2-0 up after 25 minutes, courtesy of an Alex MacDonald brace. Second-half goals from Darren Purse after 72 minutes and substitute Luke Daley on 90 minutes completed the rout.

Most goals in a single game: Six, in our 1-5 defeat on last visit (see above).