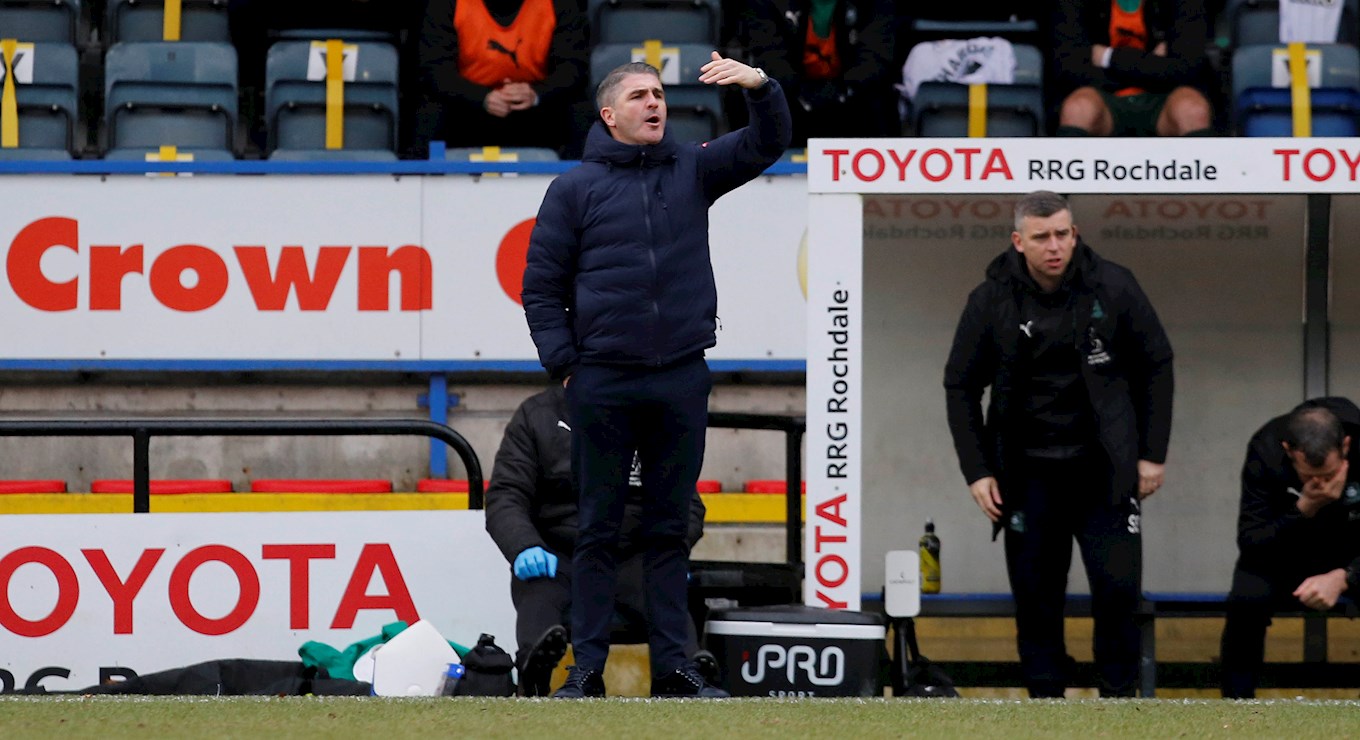 Argyle manager Ryan Lowe spoke of his satisfaction in his side’s performance during the Greens' 0-0 draw with Rochdale at the Crown Oil Arena.

Lowe said: “I thought we were excellent, and I thought our lads applied themselves the right way. On another day you could easily lose in those types of games so I’m pleased with the result.

“We did say before the game to come to Rochdale, who are going through a little bit of a tough patch in terms of losing games, how difficult that can be.”

The Greens enjoyed the vast majority of possession throughout the game, and dominated the opening exchanges of the encounter in Greater Manchester. However, a combination of good defending from the hosts, and tricky conditions, blunted the Pilgrims’ play.

Lowe said: “I thought that if we had scored early doors it would’ve opened up a little bit. They would’ve had to come at us and I think we would have had the quality to really hurt them then.

“The pitch played a big part for us with the way we play and the way we try and play. It stopped us from having that little bit of impetus and faster passing, the lads have had to take an extra touch.

“We still tried to keep doing the right thing, we created chances, we overloaded the possession, they were looking to counter us when the opportunity was right for them but our passing all over the park was good.

“We broke them down quite a bit we just didn’t have that last little bit of quality towards the end. We didn’t work their ‘keeper enough.”

Despite being denied a third successive win in Sky Bet League One, the Pilgrims’ unbeaten league run now stretches to nine games, and with clean sheets coming in each of their last three matches.

Lowe said: “I thought we defended excellently, I thought our passages of play were excellent but could’ve been faster.

“We know what happened at home, where we weren’t on our day, we could’ve easily won the game today, but we didn’t. When you travel, you take a point and move on.”

Lowe’s focus now swiftly turns to the upcoming double-header at Home Park, where the Pilgrims take on the division’s top two sides, Peterborough United and Lincoln City, in the space of a few days.

“We’re coming up against two very good teams, first and second, and they’re the teams you want to be playing. I’m really looking forward to it.”