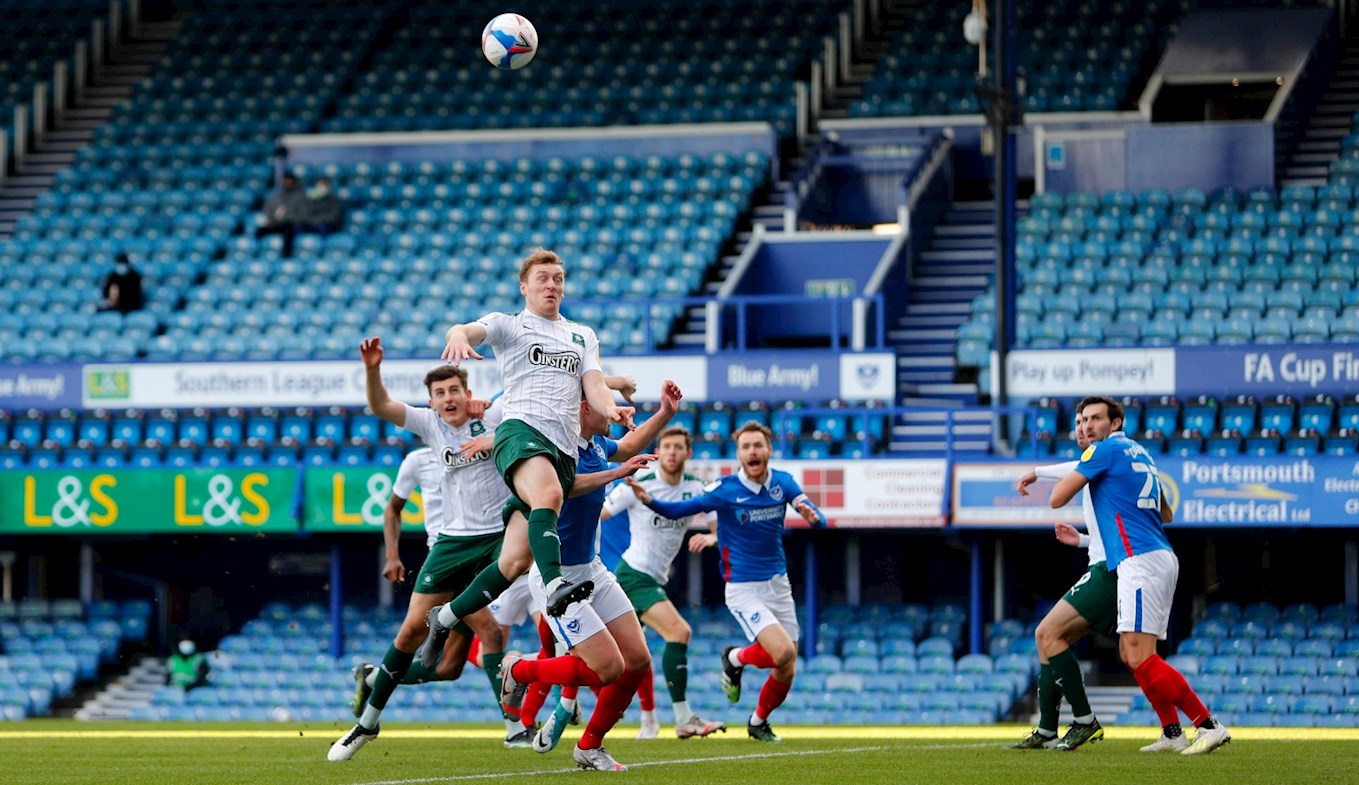 Argyle hearts were broken by two late goals in the space of two minutes, denying the Greens a fabulous victory in a traditionally gripping encounter with Portsmouth.

A tight game burst into life 20 minutes from time, when Luke Jephcott stabbed in the opening goal for the Pilgrims and three points were heading to Home Park when Argyle’s leading scorer doubled his tally after brilliant approach play from substitute Niall Ennis.

Portsmouth were offered a route back into a game that was gone when Ronan Curtis stole the ball to pull one back on 86 minutes and moments later James Bolton headed in a leveller that was more than a little harsh on the otherwise outstanding Pilgrims.

Argyle manager Ryan Lowe made just the one change from the entertaining 2-2 draw at home to Accrington last weekend, with Byron Moore replacing the absent Joe Edwards and Danny Mayor taking the captain’s armband.

Loan signing Sam Woods joined the other recent recruits of Adam Lewis and Ennis on a bench that also included the youthful duo of Klaidi Lolos and Ryan Law.

Portsmouth boss Kenny Jackett also made one switch in a wide area, introducing Marcus Harness for Ryan Williams from the team that performed superbly in defeating Charlton Athletic 3-1 in midweek.

The first Dockyard Derby this season ended in a thrilling 2-2 draw in front of the live TV cameras in November but this latest edition opened with a horrible clash of heads between Kelland Watts and Ellis Harrison, with both men fortunately able to continue after treatment.

Despite the cold, Fratton Park was basking in some February sunshine and the Greens were soon on the front foot, winning a corner whipped over by Conor Grant and Pompey had to charge down a poked effort from the fully-recovered Watts.

Grant also prompted the next meaningful foray with a terrific long ball into the channel for Ryan Hardie to chase and he won a second corner for the Greens, this one delivered deep by Tyrese Fornah but Jerome Opoku was unable to get a clean header on the ball after an untidy challenge from John Marquis.

In a tight opening to the game, Argyle were enjoying impressive control of possession and playing with an assurance that will be particularly pleasing for Lowe in a week that the boss signed a new long-term contract with the Pilgrims.

Danny Mayor, as always, was pulling the strings in midfield, with Panutche Camara and Tyrese Fornah working tirelessly to deny Pompey space. The hosts did get their first sniff from a free-kick on 18 minutes but the Argyle wall stood strong.

Mike Cooper was brought into action moments later after Harness picked up on a loose Pilgrim pass and rifled a low shot toward the bottom corner, but the Argyle custodian did a terrific job in turning the ball wide.

Portsmouth would go on to win three successive corners before Argyle could clear and there was no doubt the home side were looking to crank up the pressure. Thankfully, the defensive trio of Watts, Will Aimson and Jerome Opoku remained resolute.

Cooper was called upon again to fend off a long-range skidder from Harrison and a subsequent corner was headed over by Sean Raggett, as Argyle continued to deny Portsmouth any time or space in the penalty area.

A weaving run from Mayor very nearly breached the Pompey rearguard on 38 minutes but the final effort was blocked by a combination of Raggett and Bolton. At the other end, Cooper comfortably saved a low 20-yard drive from Harrison.

It was, however, Argyle asking the main questions as the half drew to a close and, although Portsmouth stopper Craig McGillivray had not been forced into a serious save, the Pilgrims could be very satisfied with their opening 45 minutes of work.

The second half started with a twisting run from Harness and Fornah was positioned perfectly to clear the low cross, with Marquis nodding straight at Cooper from the resultant corner.

Argyle settled into their passing rhythm with more tidy work from Mayor and a galloping run from Hardie ended with a cross-field pass for Moore on 57 minutes, with Argyle eventually winning a corner sent deep by Mayor, which found Aimson unmarked for a header well held by McGillivray.

The first change of the game saw Curtis replace Michael Jacobs for Pompey but it was Argyle controlling the attacking flow, with Hardie doing a fine job in stretching the home defence with his willing runs.

Jephcott then took his turn with a clever surge into the right channel and a low reverse pass for Hardie, who was only just thwarted by a brave last-ditch challenge from Raggett.

A Portsmouth corner then had Opoku and Fornah bravely throwing their bodies in front of the ball before a swift counter led by Camara saw similar defending from the hosts, as Jephcott and Hardie both had shots blocked.

The Pilgrims were growing as an attacking threat with every passing minute and Lowe sought to build on that momentum by introducing Ennis for Hardie, while Pompey made their second switch with Harvey White replacing Harrison.

Ennis made an incredible impact, winning possession on the right and then whipping over a quick cross for Camara, who took a touch before forcing the ball inside for Jephcott to prod home the kind of finish that has defined his superb season.

It was a goal that was coming for the Greens and Portsmouth were growing ever more frustrated, as the Pilgrims continued to swamp their hosts with a combination of tenacious defensive work and excellent passing football.

Portsmouth tried to change the pattern with a deep cross met by Charlie Daniels on the volley but Aimson bravely blocked the effort and Argyle were soon on their way to a blistering counter.

Ennis, again, burned down the right with searing pace and he also had the composure to pick out the waiting Jephcott at the far post for the simplest of finishes. It was another fabulous goal for the Greens and thoroughly deserved.

Job done for Jephcott, and he came off for Woods to make his debut in the closing minutes, but Argyle placed themselves under unnecessary pressure when Curtis pounced on some rare hesitant defending to sneak in behind Watts and fire past Cooper from close range.

Unbelievably, and painfully, Pompey were level a minute later, when a cross flashed over from the right was met by Bolton for a thumping header that gave Cooper no chance. It was incredibly cruel on the Greens, who introduced Lewis for Camara in the final minute.

Understandably buoyed by their dramatic recovery, Pompey were pressing for a winner in stoppage time but Argyle thankfully held on for a draw that could have been so much more.