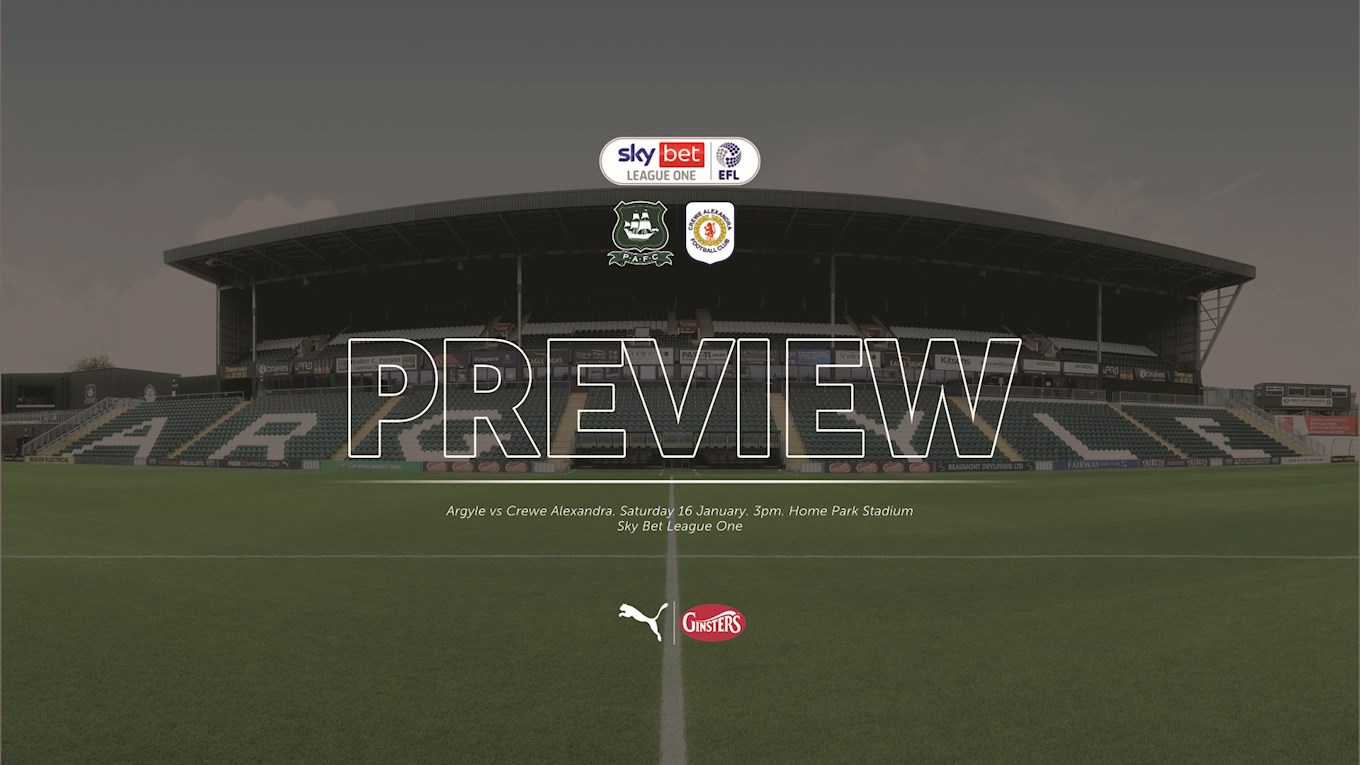 Argyle head into Saturday’s Sky Bet League One clash with Crewe Alexandra looking for a third consecutive win in all competitions.

The Pilgrims have won three of their last five fixtures, a run which began immediately after their visit to the Alexandra Stadium a month ago, and two on the spin – following up a hard-fought home victory over Gillingham with a win at Championship side Huddersfield Town in the Emirates FA Cup.

Argyle have collected more points on home soil than any other side in the division so far, but face tough opposition in David Artell’s Alex outfit, who sit on the fringes of the play-off pack, in ninth place on 31 points, after an impressive start to life back in the third tier.

Last time out, the Railwaymen looked to be cruising to another excellent victory on the road, leading Rochdale 3-0 inside the opening 35 minutes at the Crown Oil Arena. A double from Oliver Finney, either side of an Owen Dale strike, had the visitors well clear, but a second-half fightback saw the hosts snatch a 3-3 draw.

That had been Crewe’s first competitive fixture since Boxing Day, a 1-1 home draw against Fleetwood Town, with the Alex’s opponents unable to fulfil fixtures over the festive period due to coronavirus outbreaks.

Artell’s side had been decimated by illness, injury, and COVID-related isolations for the trip to Dale last time out, but the Alex manager has confirmed that a number of players are ready to return for the trip to Devon – including club captain Perry Ng, who has completed a six-game ban and is eligible to play.

ARGYLE AT HOME TO CREWE ALEXANDRA IN THE EFL

Playing their first match in Division 3 for over nine years, Billy Bingham’s Argyle drew 2-2 at home to the Alex in this season opener. Steve Davey and former Crewe centre forward Frank Lord scored for us.

Ryan Lowe’s men beat the Alex 2-1 in this table-topping clash. Harry Pickering had given the visitors a 52ndminute lead with a. scorching long-range effort, which Luke Jephcott cancelled out five minutes later.

Our winner came from the penalty spot on 71 minutes – Antoni Sarcevic scoring against his former club after Danny Mayor was brought down in the box. Both clubs went on to be automatically promoted to League One at the end of the season.

In what turned out to be Peter Shilton’s last match in charge of the Pilgrims, Mark Patterson and substitute Mickey Evans scored a brace in the last ten minutes to give us victory.