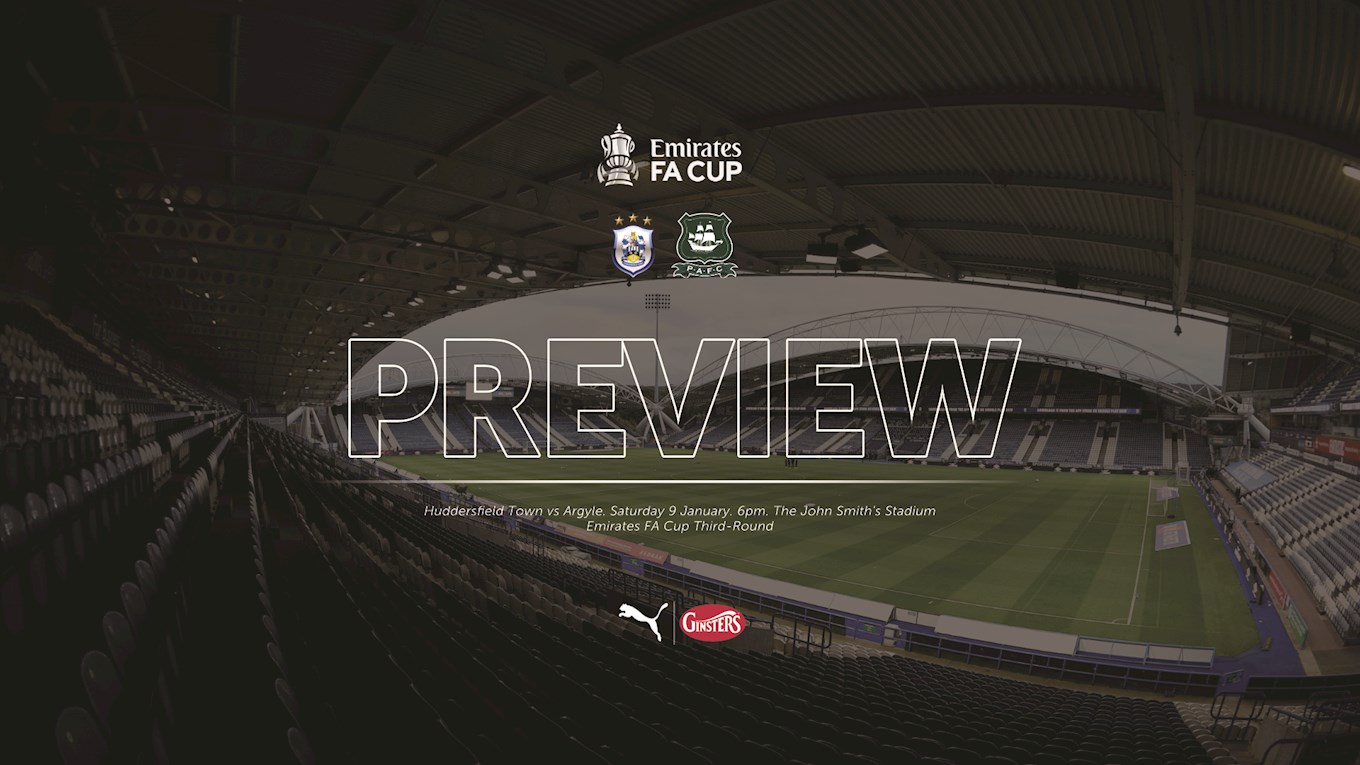 Ryan Lowe’s Pilgrims head to the John Smith’s Stadium on Saturday looking to reach the fourth round of the Emirates FA Cup for the first time since the 2007/08 season.

On that occasion, the Pilgrims, then of the Championship, lost out to naval rivals Portsmouth at Fratton Park, with Premier League Pompey going on to win the competition that season.

Standing in the Greens’ way are Carlos Corberan’s Huddersfield Town, who currently occupy 13th place in the Sky Bet Championship.

The Terriers are a tough proposition at home, having won seven of their 12 league games at the John Smith’s Stadium this season, failing to score only once. Last time out, they suffered defeat at the hands of Reading, who came from behind to secure victory in West Yorkshire, after Fraizer Campbell had given the hosts a sixth-minute lead.

Argyle, meanwhile, have rebounded strongly after a sticky run of form, securing seven points from a possible 12 over the Christmas period.

The Greens kicked-off the festive schedule with a 1-0 victory over Milton Keynes Dons at Home Park, before taking the lead twice in a 2-2 draw away at promotion-chasing Charlton Athletic.

Having suffered a 3-2 reversal to in-form Oxford United at Home Park, the Christmas fixtures were bookended by another 1-0 victory, at home against Gillingham, through Luke Jephcott's 14th goal of the campaign.

Argyle will be without George Cooper for Saturday’s trip, with manager Ryan Lowe revealing that the wing-back would need surgery to correct a knee problem sustained in the defeat at Crewe Alexandra last month. Meanwhile, long-term absentee Gary Sawyer nears a return to first-team action.

Town boss Corberan, formerly assistant to Marcelo Bielsa at Leeds United, has hinted that he is likely to rotate his squad for the Pilgrims’ visit, handing some much-needed game time to players who have not featured much in recent weeks.

Saturday’s meeting with the Terriers will be the first in a decade, almost to the day.

On 11 January, 2011, Peter Reid’s Pilgrims, who were reduced to nine men before the final whistle, saw a two-goal lead slip away in a 3-2 defeat.

Academy product Joe Mason gave the Greens a dream start that day, scoring after just 54 seconds, before Curtis Nelson saw red for a professional foul. With 10 men, the Pilgrims doubled their lead on 15 minutes, with Mason grabbing his second.

All three of Town’s goals came before half-time, with a Kari Arnason own-goal, a Jordan Rhodes strike, and a scrambled winner from defender Peter Clarke securing the win, before Stephane Zubar was sent-off in the second-half for Argyle.

The two sides’ first ever competitive meeting came in the FA Cup, with David Jack scoring the Greens’ goal in a 3-1 defeat to Town in the 1919/20 third round. Two years later, in 1922, the Terriers won their first, and only, FA Cup title.

The Pilgrims have been drawn against their Yorkshire opponents five times in the competition’s history, with their last meeting occurring in the fourth round of the 1966 competition, which Huddersfield won 2-0 at Home Park.

A reminder, Saturday’s fixture will not be available to stream on iFollow. However, it is free to view for UK supporters on the FA Player. Click here for more details.