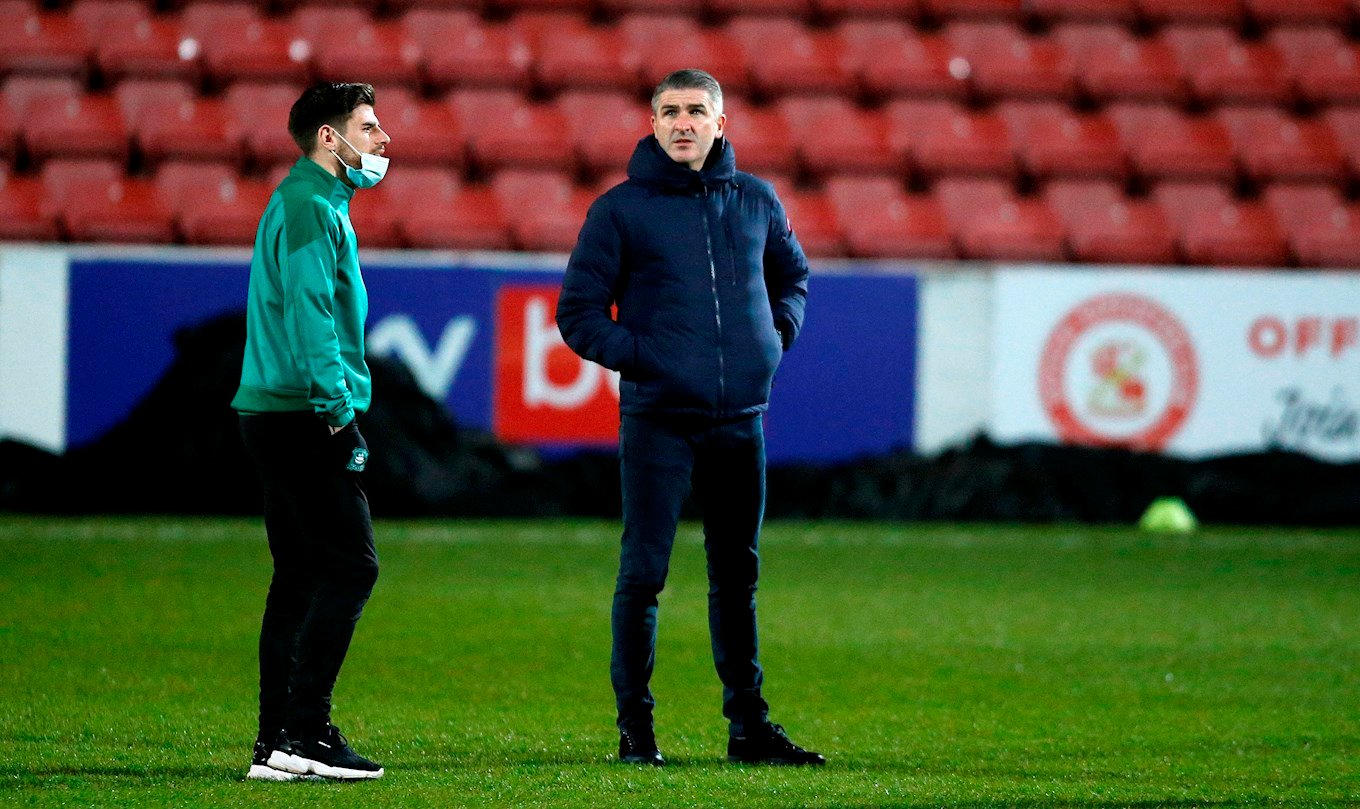 Argyle manager Ryan Lowe was full of praise for his side after their 2-0 Sky Bet League One victory over Swindon Town at the Energy Check County Ground on Tuesday night.

Strikes from Panutche Camara and Ryan Hardie secured the three points for the Pilgrims in a dominant display in Wiltshire.

Lowe said: “I just thought it was a good, complete performance. I thought in possession and out of possession we were very good.

“The defence was solid, but it worked from the front with the two strikers. All over the park, to a man, they were very good. [They were] in the right areas and we played a lot more than we have done in terms of the passing, lending it to each other and waiting for openings.

“Simplicity is a big word that I always use because it is simple stuff and when they do that, they look a good team. I said [to the boys] ‘you’re becoming a good team, can you go and become a very good team?’ and I think they can. I’ve got every faith and belief that they can do that.

“Tonight, they knew when to press when not to press and were getting in good areas, it was fantastic, so I’m pleased.”

While the Greens generated plenty of opportunities in attack and looked a constant threat in the final third, they also limited John Sheridan’s Robins to few attempts on goal – with goalkeeper Mike Cooper called into meaningful action only once or twice. Lowe is now keen to see his side build on their emerging defensive resilience.

“When we do that, we look a good team. It was all pleasing from start to finish to be honest, even the subs that have come on the pitch were pleasing. They’re going on and knowing their jobs and what we want.

“We have just got to keep learning, keep working every day. We are taking leaves out of the book from the likes of Sheffield United and the way they press.

“We are working on stuff that we learnt from them and [the FA Cup] has been a good learning curve for us and I said to the boys that we have got to take it into the league, and we have certainly done that. They’ve gone out today and, as you’ve seen, they’ve worked their socks off and warranted the three points.”

The Pilgrims have enjoyed a resurgent 2021 so far, putting together a four-game unbeaten run which has seen them climb to 12th in the league table. According to Lowe, the key has been to trust their methods, and have belief that their style of play will yield the results.

He said: “It’s not going away from the strategy we have and the style of play, we won’t come away from it. I think if you keep working to your beliefs you can keep winning games and scoring goals, and we know that.

“It’s a learning curve every single day. When you lose games of football it’s learning, even when you win you learn, but when you lose you know what you have to look at and what has gone wrong, but it is down to the players as well.

“We put the sessions on for them, we put the plans together and they have to execute it but that’s what they’ve been doing so they have to take a lot of credit also, and my staff, because we work ever so hard to make sure that we put things right and we are certainly doing that.”

“We’re enjoying this little spell and we want to keep enjoying it.”