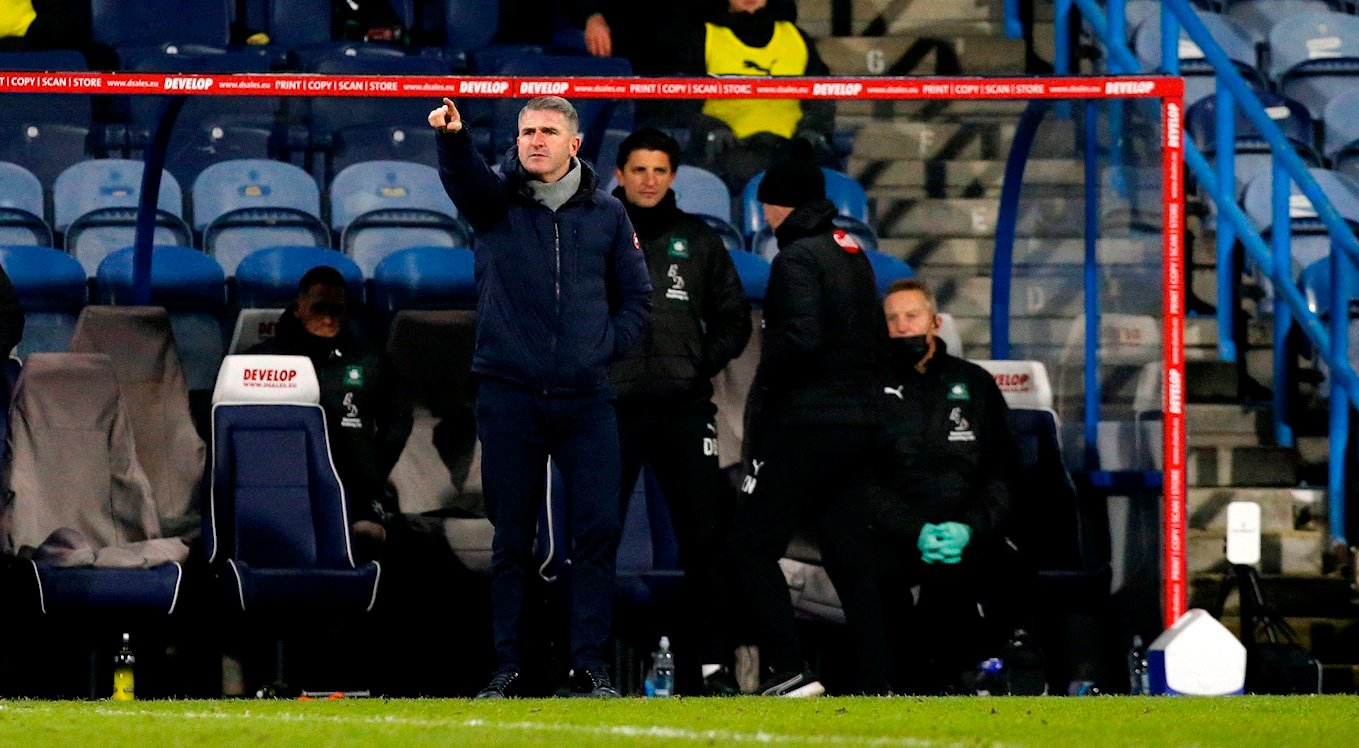 Argyle manager Ryan Lowe hailed his side’s resilience and desire in twice coming from behind to secure a place in the Emirates FA Cup fourth round.

The Greens fell behind twice in the first-half at the John Smith’s Stadium against Sky Bet Championship side Huddersfield Town, but goals from Ryan Hardie and Panutche Camara ensured parity at the interval, before skipper Joe Edwards fired home from close range in the second half.

Lowe said: “I thought we were very good all over the park [on Saturday evening]. I know that we gave away a couple of goals, one was a worldie, but the attitude to come back from that, we scored three wonderful goals.”

“The lads have got that bouncebackability, I think we’ve done it a lot this season. I don’t want to keep going goals down, but it just shows the attitude, desire, commitment of the boys to get back in.

“They know they made the mistake in terms of the goal, but we knew were on the front foot, we set the game plan out to counter fast, and I think we did that. To score three fantastic goals like that against Championship opposition in Huddersfield is pleasing.”

After an eventful and frenetic opening 45 minutes in Yorkshire, Argyle proved much more effective in limiting the Terriers’ attacking play in the second-half, which Lowe attributes to a slight tactical tweak at half-time.

He said: “We just said to be more compact – coming to these type of teams, the levels, there’s a lot of good footballers in there, and we felt that we didn’t want to be undone. I thought the first-half was a little bit ‘you have it, we have it’, counter each end, but we needed to make sure that we tightened things up a bit.”

The victory ensures that the Pilgrims will enter the fourth round of the competition for the first time since 2008, where they lost 2-1 to eventual winners Portsmouth, then a Premier League side, at Fratton Park.

Lowe said: “We always knew [Huddersfield] was going to be a tough place to come, I said that from day one, and to get to the fourth round with Plymouth Argyle is a tremendous achievement.

“We take massive confidence from winning any game – you can only beat what’s in front of you. I respect the FA Cup massively, it’s a big competition, I love it. It’s the first time I’ve ever been into the fourth round as a manager.”

The victory over Huddersfield enhances the Greens’ improved run of form, with Lowe’s side having secured three wins in their last five games in all competitions, losing only once.

“We are in a good run of form, and we want to keep that winning mentality. We had it a lot last season, we had it early this season, and we had bumps in the road – we’re building to where we want to get to.”

All eyes will now be on the fourth [and fifth] round draw on Monday evening, and Lowe believes that the Greens’ cup run is helping to raise the profile of the club on the national stage.

He said: “[Reaching the fourth round] is massive for the football club, because it puts us on the map. We’re building from the bottom to the top. We’ve earned a bit of respect today by coming to Huddersfield and getting to the fourth round, and people will take note.

“I’m just going to wait patiently, but whoever we get, we’ll relish the opportunity.”