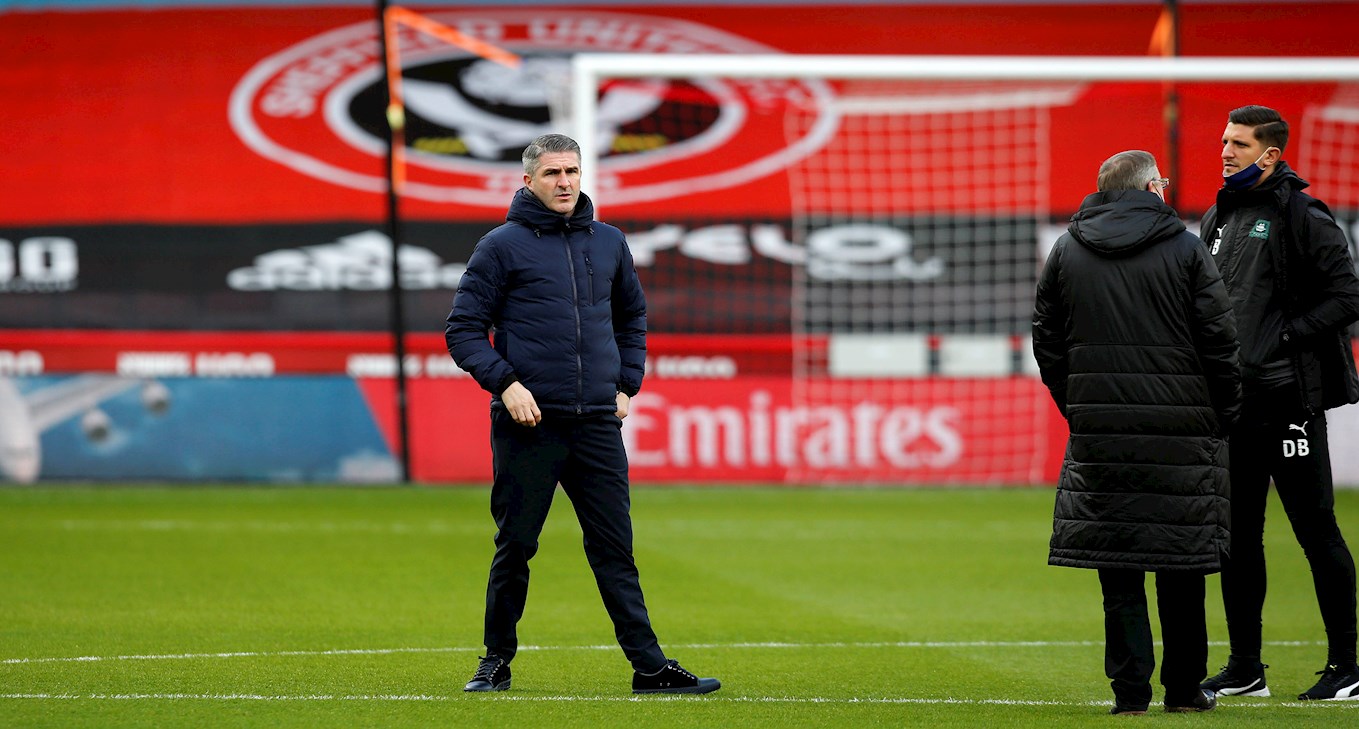 Pilgrims manager Ryan Lowe is in no doubt that his side did the Green Army proud in their 2-1 Emirates FA Cup defeat to Sheffield United at Bramall Lane.

The Greens matched their Premier League hosts for much of the encounter, but were made to pay for conceding to goals from Chris Basham and Billy Sharp either side of the interval.

A spirited response saw Argyle pull one back through energetic midfielder Panutche Camara, and a frenetic final few minutes followed, but an equaliser did not come.

Lowe said: “I was pleased, in terms of the performance from us. The way we went about our business, coming to Sheffield United, and put on a show like we did – we were not too far away from potentially getting a second and taking it to extra-time.

“We’ve had a good run in the FA Cup to the fourth round, we haven’t been there for a while, and I’d have loved to be sitting here now saying we’re going to the fifth round, but our bread and butter now returns to League One.

“What I will say, I’m proud of every single one of them players that entered that pitch today, and on this run. The lads gave it everything today, the belief, the character, the desire to keep going. We just fell a little bit short, but there’s no shame in falling short to a Premier League outfit.”

In the build-up to the game, Lowe urged his players to express themselves and play expansive football – and they certainly did that on a pristine Bramall Lane surface, despite the top-flight hosts’ pressing game.

Their commitment to playing through the thirds was epitomised by 25th-minute passage of play that nearly resulted in the opener – when a back-to-front move saw Camara turn Luke Jephcott’s low cross over Aaron Ramsdale’s crossbar.

Lowe said: “They’re the patterns of play we work, that’s what we want to do, that’s how we want to score our goals. Most of our goals come from those attacks.

“In the first-half, we had to soak up a lot of pressure, but what we did do was, in the turnovers, we forced them into mistakes, that’s what we wanted to do.

"They’re a good team, pressing the way they pressed, all over the park, that’s something for us to learn. They press from all over, different angles, they let you have it and then they go off the second touch, and they’re little bits and bobs that we can learn off them, because of where they’ve got to, and how they’ve got there.’

The Pilgrims’ manager is keen to learn from the experience of going one-on-one with Premier League opposition, and feels that, in fielding a full-strength side, the Blades showed Argyle plenty of respect.

He said: “They had nine players that started against Tottenham, and the two that played, Brewster and Sharp, are good players also. That showed us a lot of respect.

“I’ve come up against two managers in the last two rounds of the FA Cup – the Huddersfield manager was very astute tactically, and you look at Chris Wilder and Alan Knill and what they’ve achieved and how they go about it.

“Wilder did show us a lot of respect, and we knew he would. He’s a good guy, he’s been where we are, he’s got out the leagues and up to the Premier League, he deserves to be where he is.

“So, it was only right that they showed us a lot of respect, I was pleased with that.”