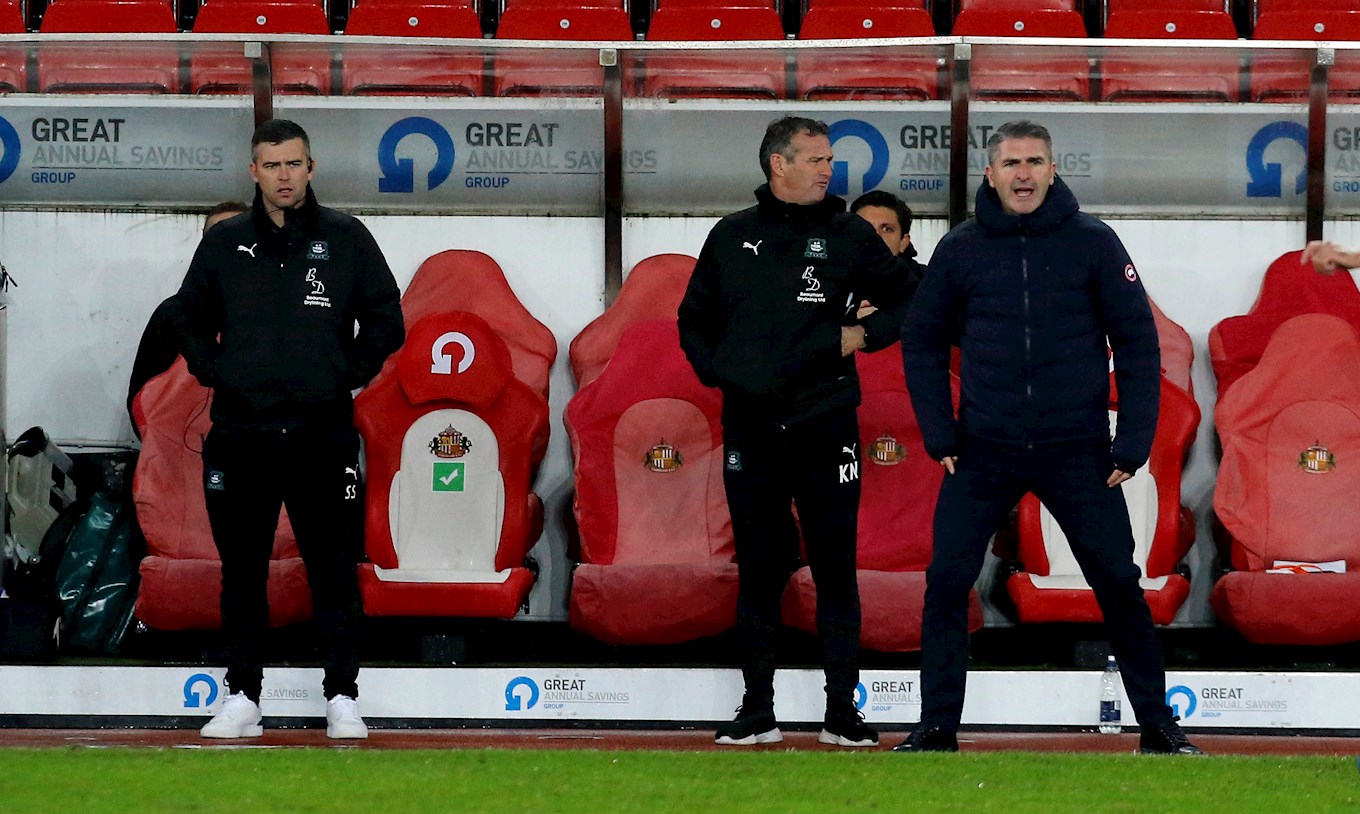 Argyle manager Ryan Lowe hailed his player’s “magnificent” performance in their Sky Bet League One victory over Sunderland at the Stadium of Light.

The Greens 2-1 triumph, sealed by Joe Edwards’ second-half strike, was their first league win on the road this season, and the manager was keen to heap praise on his players after the game.

He said:  “When you come away to a special place like this [the Stadium of Light], even though it was empty, and to take all three points with a performance which was magnificent from every single player that entered the pitch, was very good, and I’m really pleased.

“Pleased for the group, they’re getting better each day, each week, the results are getting better. To come to Sunderland and play the way that we played, the goals we scored, and the patterns of play, is pleasing.”

With a first league win away from home under their belt, Lowe is keen to see his side build on their promising run of form.

The Argyle manager said: “I haven’t let anything get on my mind about not winning away from home, the league’s a lot harder [than last season]. We were magnificent, we’ll give the lads credit where the credit is due, and they’ve got a fantastic three points – but we’ve got to keep building.

“We had a good start [to the season], a little bad patch, and now another good patch that we’ve got to continue. The league is tough, we’re not getting carried away – as I say, never too high, never too low – but when you come away to Sunderland and perform the way that you perform, you’ve got a right to be happy, and we certainly are.”

While the Pilgrims’ victory was secured by goalscoring wing-backs, a hallmark of Lowe’s footballing philosophy, it was built on a foundation of high work-rate and incredible pressing out of possession.

Lowe said: “The work-rate is fantastic and they’re a fit group. The average over the team is very good, the numbers are very good in terms of what they’re achieving in the running stats, but that should be a given. You’ve got to work hard for every single one of each other, and they’re certainly doing that.

“What pleased me most is two wing-backs getting in positions to score, two fantastic goals. A lot of teams wouldn’t expect our wing-backs to get in those positions, but they do because they’re determined to get in there.

“The football on show at the Stadium of Light, even though there was no-one in, for our fans all tuning in on iFollow, that was a top performance.”

Having led at the interval, Argyle were pegged back when Aiden O’Brien converted former Pilgrim Callum McFadzean’s left-wing cross, but found extra resolve to retake the lead and protect a win that lifts them up to 11th place in the League One table.

Lowe said: “We’ve tried to talk to the lads, when you do get rocked a little bit, you have to understand that the opposition are going to do their analysis on us and know where we’re getting out and try and stop that. It’s like a game of chess with the opposition manager – and certainly Sunderland weren’t going to let us roll them over, there’s no chance.

“They got a goal back, but for us to get a fantastic goal from Joe with his left foot again was fantastic.”

The win sets the Pilgrims up nicely for their Emirates FA Cup fourth-round trip to Premier League Sheffield United on Saturday afternoon.

Lowe said: “Another tough task, we respect Sheffield United massively. We don’t disrespect any team in our league, let alone a Premier League outfit, they’ve got some quality players. What we have got to do is go there and set a game plan up.

“It’s a good day out for us, and it’s a bit of a free hit, as no-one expects us to win, but we will go there with a game plan and try our best.”