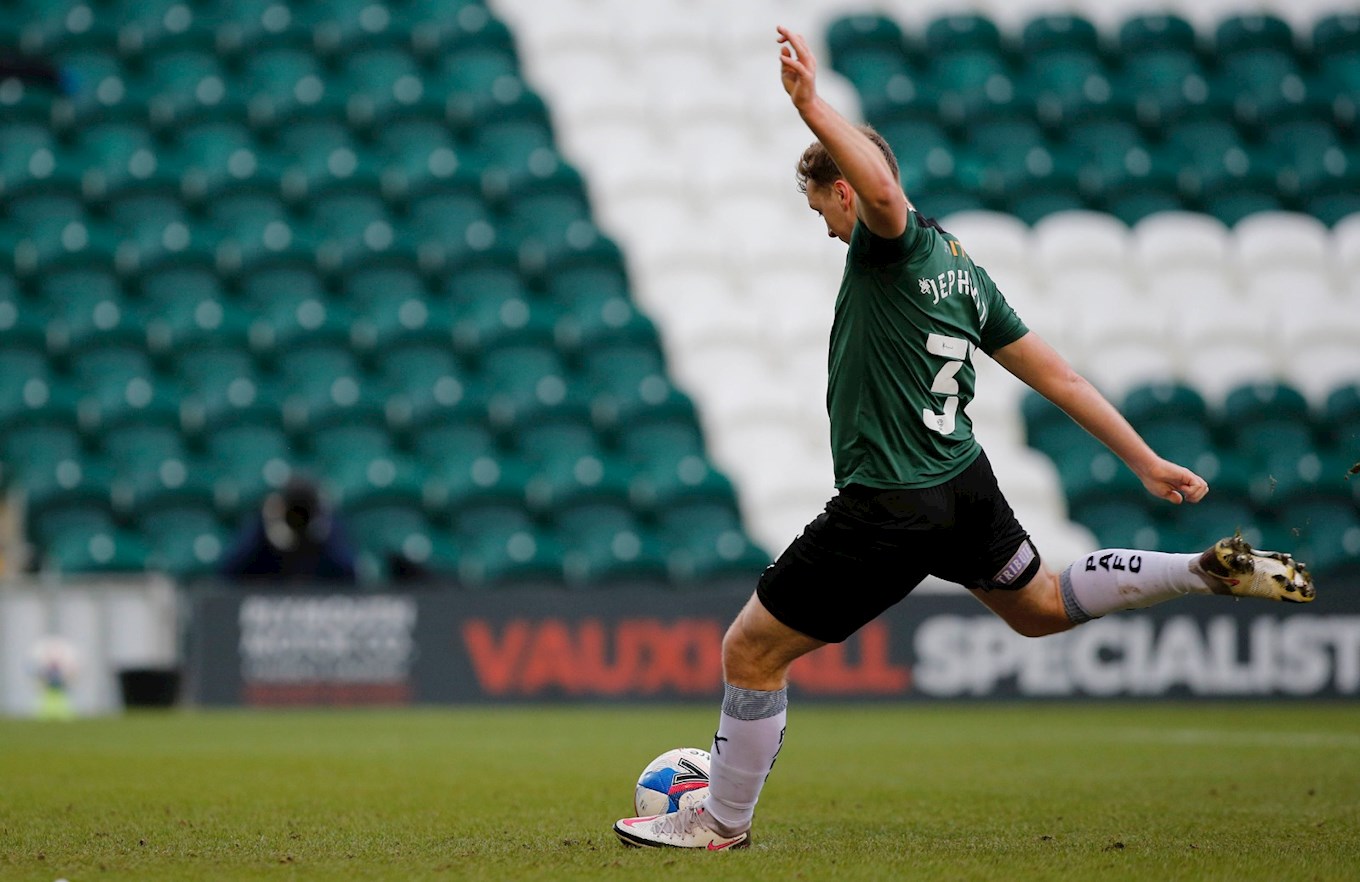 Argyle shared the points with Crewe Alexandra after another fascinating Sky Bet League One encounter at Home Park.

The Greens were excellent in the first period, creating numerous chances in a display full of tempo and intensity, deservedly grabbing the lead when Luke Jephcott converted a penalty on 11 minutes.

The Pilgrims remained in control until the hour but were pegged back by an equaliser from Oliver Finney, and neither side could find the winner. There was some last-minute frustration for the Greens, when Panutche Camara was dismissed for a second bookable offence.

Argyle manager Ryan Lowe stuck with the same side that secured a brilliant 3-2 win in the FA Cup at Huddersfield last Saturday, with one change on the bench, where new loan signing Adam Lewis came in for Niall Canavan, who joined Bradford City earlier this week.

Crewe boss David Artell made two changes from the 3-3 draw at Rochdale seven days ago, where the Alex led 3-0 at half-time, with Finney scoring twice and Owen Dale also on the scoresheet. David Richards was preferred to Will Jaaskelainen in goal and the other alteration saw Travis Johnson replaced by Olly Lancashire in defence.

In a lively start to proceedings, a dipping corner from Conor Grant caused some disruption in the Crewe defence and Tyrese Fornah had his foot pulled back ready to unleash from the clearance before a timely interception by the recovering Charlie Kirk.

The Pilgrims continued with the forward momentum and a second corner was sent back in by Fornah and when the ball fell to Grant, he danced into the box before being toppled over by a clumsy challenge from Luke Offord.

Leading scorer Jephcott immediately took on the spot-kick responsibility and the outcome never looked in doubt, as he calmly slotted the ball into the bottom corner, sending Richards the wrong way in the process.

A superbly-timed challenge from captain Joe Edwards stopped a surge from Dale, as the visitors looked for a quick reply and the Greens were soon back on the attack, with the skipper popping up at the other end to dig out a dinked cross that was headed out for yet another Argyle corner.

A long-range drive from Luke Murphy flashed wide for Crewe and Mike Cooper was alert to a corner moments later, punching the ball to safety despite heavy numbers in the penalty area.

The Pilgrims, however, swiftly changed back into forward mode, with Camara winning the ball in midfield for Danny Mayor, who released Jephcott down the left but his low cross toward strike-partner Ryan Hardie was well read by Richards.

Mayor returned the favour to Camara with a quick pass on the edge of the area but the strike bobbled safely into the arms of Richards. When Crewe did get in behind the Greens at the other end, Finney’s low shot was comfortable for Cooper after a clever threaded pass from Kirk.

There was a pleasing assurance about the Pilgrims, with the defensive trio of Will Aimson, Jerome Opoku and Kelland Watts doing a fine job in denying Crewe’s sprightly forwards room to cause too much concern.

A sweeping move down the right ten minutes before the interval very nearly gave Hardie a chance to double the lead, as a flick from Jephcott found the run of Camara but the low cross was a fraction too close for the alert Richards to smother the ball.

Camara’s next pass was pinpoint, feeding it into the path of Jephcott on the edge of the penalty box and his first-time drive with the left-foot forced Richards into a super save. From the subsequent corner, the visiting ‘keeper made an even better block, this time denying a rasping drive from Grant.

In a thoroughly entertaining first period, Aimson thwarted a Crewe counter with a brilliant challenge at the near-post but the overwhelming majority of defending was being done by Crewe, as another teasing cross from Grant was headed clear by Lancashire with Hardie poised to head home.

Mayor took on the mantle of causing havoc down the left, nudging a perfect pass into the path of Watts for a well-struck effort that deflected narrowly over the Crewe bar, as Argyle completed a terrific first-half display by heaping more pressure on the visitors.

The second-half opened with Argyle winning their sixth corner of the day, cleared by the Crewe defence. The visitors then had a worrying moment when striker Mikael Mandron went down with what looked like a serious injury, but thankfully got back to his feet after lengthy treatment.

A fizzing cross from Grant was delivered brilliantly into a corridor that is so difficult to defend but it also just eluded the runs of Hardie and Jephcott into the penalty area. Mayor was next to feed in a cross that only just missed its target.

Grant produced a sumptuous ball for the run of Jephcott on the hour and, while Crewe snuffed out the attack, it was the sort of cross-field pass that would have had the sorely-missed Green Army purring with appreciation.

Tom Lowery replacing Luke Murphy in the Crewe midfield was the first change but focus was soon back on Grant, drilling a fine effort from the left channel that was well saved by Richards, who was also in the right place to block Camara’s rebound.

From nowhere, Crewe drew level with a break and Mandron’s reverse pass found Finney 16 yards from goal. He finished stylishly with the outside of his left boot and incredibly frustrating for the Pilgrims after controlling much of the game.

Crewe suddenly had some momentum and very nearly grabbed the lead when Dale found space on the right and lashed a drive across goal, but Cooper did a super job in holding on to the effort. Lowe turned to his bench for a change in the dynamic, withdrawing Hardie for Frank Nouble.

After a period of busy Crewe pressure, Argyle managed to reassert some control with a lung-bursting run from Grant before he was crowded out by the retreating Offord. Lewis came on for his debut in the final ten minutes, replacing Mayor on the left, while Chris Porter came on for Mandron in the Crewe ranks.

It was Grant, again, instigating Argyle’s next thrust, as he exchanged passes with Lewis before slipping the ball to Camara, who struck his shot beautifully but was denied by a flying save from Richards.

Terrific defending by Opoku prevented Porter from getting a shot away at the near post and Watts did an equally good defensive job to head clear from a subsequent Crewe corner. Argyle’s final change saw Dom Telford introduced for Jephcott in the closing moments.

Five minutes of added time gave both sides the chance to snatch a winner and Crewe had their opening when a looping cross into the area slipped out of Cooper’s grasp, but Dale’s lash at the loose ball was thankfully blocked by Watts.

Camara’s afternoon sadly came to a premature end when he was shown a second yellow card for a trip with three minutes left on the clock. Cooper then made amends with a tremendous low save from Lowery’s fizzing drive.

Honours even, and Argyle move on to the epic trip to Sunderland on Tuesday night.