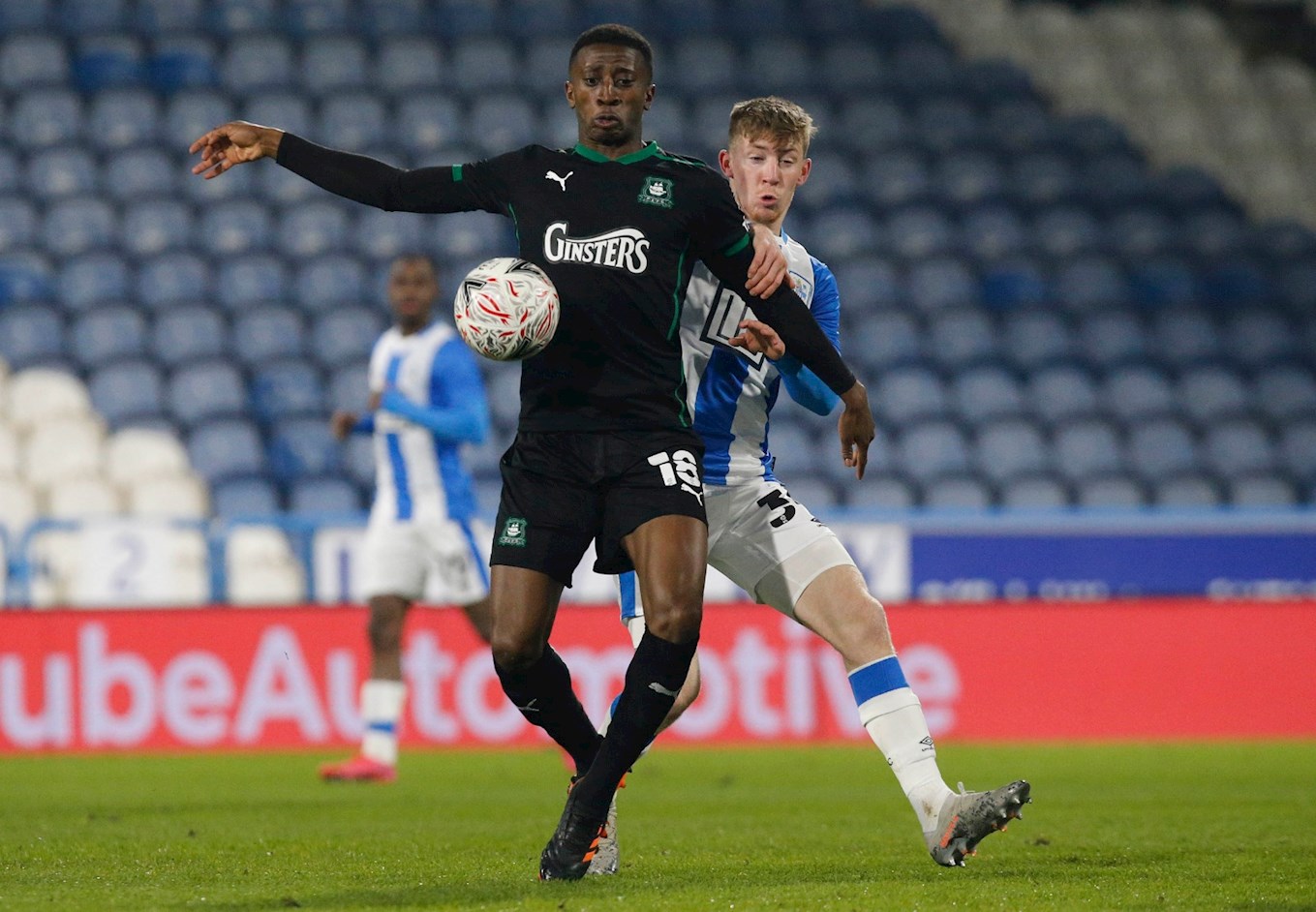 Argyle twice came from behind to book a place in the fourth round of the FA Cup with an enthralling 3-2 win at Championship side Huddersfield Town.

The hosts raced into an early lead through a Romoney Critchlow header but Ryan Hardie brought the scores level with a confident finish on 24 minutes.

A wonder-strike from Aaron Rowe restored the Huddersfield lead, only for Panutche Camara to equalise for a second time a few minutes before half-time. Captain Joe Edwards then stepped forward for a deserved winner 20 minutes from time.

Argyle boss Ryan Lowe made two changes from the 1-0 win over Gillingham last weekend, replacing the injured Lewis Macleod with Tyrese Fornah in midfield and Jerome Opoku came in for Niall Canavan at the heart of the Pilgrim defence.

Ben Reeves returned to the bench and there was also a place among the replacements for Jack Ruddy, who extended his contract with the Greens this week, and a rare occasion of two goalkeepers on the substitute list, with Luke McCormick also another glovesman option.

Huddersfield manager Carlos Corberan stuck to his pre-match pledge to rest all 11 players who had started over the festive period, handing debuts to teenagers Mustapha Olagunju and Pat Jones.

The Championship Terriers are currently mid-table in the second tier but this much-changed line-up did create the first opening, as a break down the left from Jones led to a low cross for Kieran Phillips at the near-post.

The first-time effort took a deflection before a brilliant reflex save from Mike Cooper but the young custodian had no chance from the resulting corner, as Critchlow made a darting run and glanced a neat header into the far corner.

Argyle responded with an excellent press from Luke Jephcott that gave Danny Mayor a chance to twinkle his toes on the left flank, exchanging a pass with the young striker before a shot that was scooped over the bar.

The same pair combined again on ten minutes, with Mayor slipping a pass into the left channel and Jephcott’s low cross found the run of Edwards, but he was thwarted by a fine recovery tackle from Jaden Brown.

Huddersfield threatened at the other end with a low shot from Matty Daly blocked by the well-positioned Will Aimson but the general flow was toward the home goal, including a tentative shout for handball after Brown was deceived by a dipping cross from Conor Grant.

A super cross from Fornah was headed a fraction over by Aimson and there was a pleasing sharpness about the Pilgrim play, despite conceding such an early goal.

The reward arrived midway through the first period, when Mayor won the ball in midfield for Jephcott to thread a beautifully-weighted pass for the run of Hardie, and the young Scot guided a tremendous finish beyond goalkeeper Ben Hamer.

The Terriers did respond well to the leveller and an effort from Brown was deflected over by a fine challenge from Kelland Watts but there was nothing anyone could do about Huddersfield’s second goal.

Rowe picked up the ball on the right wing and surged in field before unleashing a fantastic strike, arrowed into the top corner from 25 yards and one where you hold the hands up and say ‘great goal’.

After building some impressive momentum prior to the second goal from Huddersfield, Argyle took a few minutes to rediscover their attacking rhythm but, when they did, it was clinical.

Mayor was released by a pass from Grant and the left-foot cross was perfect for the run of Camara, who calmly took a touch before slotting an assured finish beyond Hamer. It was beautifully simple for the Pilgrims and rounded off a thoroughly entertaining first period.

Argyle were the side pushing for another goal before the interval and the Greens remained on the front foot at the start of the second half, with Camara and Fornah tireless in their midfield harassment of the hosts.

A fabulous block from Opoku denied Jones a shot on target five minutes after the restart but it was soon all about the Argyle attack, as Grant again burst through, slipped a pass to Hardie in the left channel and his searing drive was tipped on to the post by Hamer.

A superb run and cross from Grant instigated the next chance, as the ball looped to Jephcott for a steered header that was only just kept out by a combination of Hamer and Critchlow. Fornah then defined ‘body on the line’ by blocking a fierce volley with the one part of the anatomy definitely not designed for such a task.

After such a thrilling first period, the game became a little scrappy and bereft of clear goalscoring opportunities until a moment of Mayor brilliance with 20 minutes remaining.

Argyle’s creative talisman sauntered into space on the left and cut back a perfect low pass for Edwards to slide home a fine finish. It was yet another tremendously-worked goal by Argyle and a place in the fourth round was looming.

The Greens kept up the pressure in a bid to cement their lead, as a free-kick from Mayor was looped in the air for Jephcott, who controlled his low shot but it lacked the power to beat Hamer at the near post.

Huddersfield made three changes in the aftermath of the goal, while the Pilgrims inserted some fresh legs to their attack, introducing Frank Nouble for Hardie. There was no change to Grant’s display, however, rampaging forward for a low drive dragged narrowly wide.

Dom Telford for Jephcott was the next Argyle switch and a free-kick on the left gave Aimson the chance to confirm the Pilgrim progress, but his header looped over. Scott Wootton and Byron Moore for Grant and Fornah were the final two Green changes.

There was an impressive maturity to Argyle’s play in the closing stages, keeping the play well away from Cooper’s goal and terrific work from Nouble, in particular, counting down the minutes with strength and intelligence.

Camara very nearly added gloss to the win with a low pass across goal that was intercepted by Alex Vallejo but Argyle had done their job with professionalism and attacking enterprise.