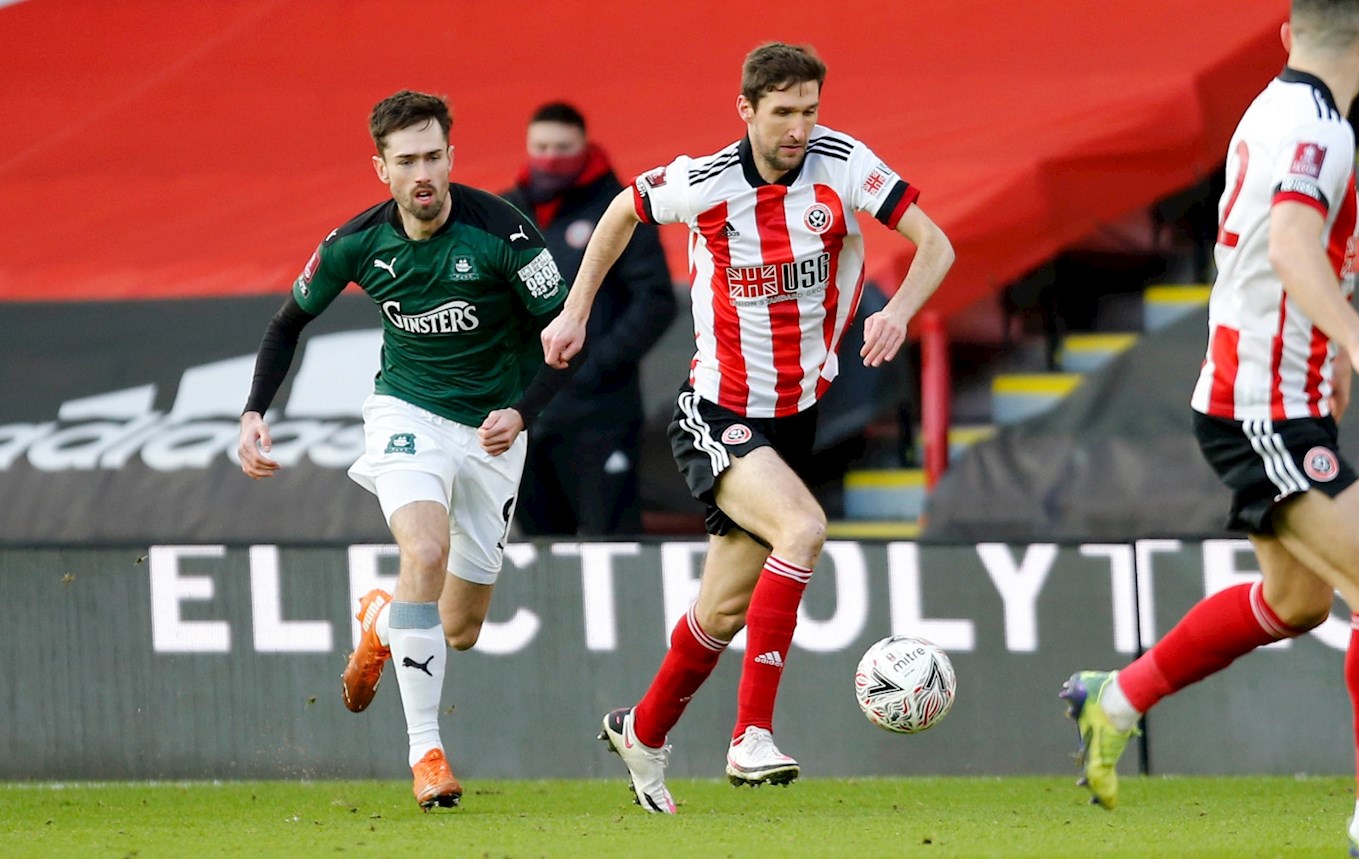 Goals either side of half-time had given the Blades a cushion and they looked to be securely in the fifth round before Panutche Camara set up a grandstand finish by pulling a goal back 15 minutes from time.

A Chris Basham header and Billy Sharp’s composed finish had given Sheffield United a 2-0 lead but the Pilgrims never let their heads drop, continued to play some lovely passing football and nearly got their reward.

Argyle manager Ryan Lowe made one change from the superb midweek win at Sunderland, with Camara returning from suspension to replace Adam Lewis. New signing Niall Ennis was cup-tied and there were opportunities on the bench for young trio Ryan Law, Ethan Mitchell and Brandon Pursall.

Sheffield United boss Chris Wilder made just two changes from the team that lost 3-1 to Tottenham in the Premier League last weekend and they both came in attack, where Sharp and Rhian Brewster were preferred to Oliver Burke and David McGoldrick.

The Blades opened proceedings with successive corners, cleared by Joe Edwards at the near-post and then a thumping header from Jerome Opoku, who quickly followed that intervention with a perfectly-timed tackle on Sharp.

In Argyle’s first taste of the VAR system, the assistant’s flag raised after the Opoku challenge but nothing to take away from a confident start by the young defender on loan from Fulham.

A slick move involving Enda Stevens and John Fleck created room for Sharp in the left channel but Opoku, yet again, was in the right place to execute a superb tackle, and goalkeeper Mike Cooper thumped clear the resultant corner.

Despite the Premier League surroundings, Argyle stuck with their passing principles, moving the ball competently out from the back but the challenge was getting strike-pair Luke Jephcott and Ryan Hardie more involved in the game.

While there was a pleasing composure about the Pilgrim play, Sheffield United also looked very sharp in possession, working a fluent move that ended with a cross to Brewster, who headed wide of the far post.

Danny Mayor carved out his first significant moment on 16 minutes, working the play neatly on the left for an eventual cross by Grant. John Egan intercepted for the hosts, heading the ball skyward for goalkeeper Aaron Ramsdale to clutch with comfort.

Cooper was asked a much bigger question at the other end, as Brewster swivelled 22 yards from goal and lashed a fierce drive that prompted a super block by the Pilgrim custodian. Moments later, Brewster slid a low effort wide from a Stevens cross.

Argyle put together a fabulous team move midway through the first half, working the ball beautifully down the left and the low cutback from Jephcott was perfect for Camara from 10 yards, but he skewed the connection off target.

It was stunning play from the Greens and a glorious chance, which almost suffered the ultimate punishment within a minute, as a loose ball fell to John Lundstram in the Argyle box but the home midfielder blasted his low shot narrowly wide.

Former Exeter youngster Ethan Ampadu was the catalyst for a Sheffield United penalty shout on the half-hour, exchanging passes before a lashed shot that struck Kelland Watts in the arm and face. VAR, thankfully, ruled against a spot-kick for the hosts.

Argyle won their first corner ten minutes before half-time and a good delivery from Tyrese Fornah was headed clear at the near post by a Sheffield United defence gradually coming under more pressure from the Greens.

Unfortunately, the Blades responded with the opening goal, patiently working the ball across a compact Argyle defensive unit until a dinked cross to the back post by Sharp was met with a powerful header from Basham, sent back across Cooper and into the Pilgrim net.

The Greens recovered valiantly from that disappointment, with Camara forcing his way through the midfield and spreading a pass wide to Grant, who rifled a low drive into the side-netting at Ramsdale’s near post.

Argyle created one more opening at the end of the first half, with Edwards and Hardie winning a corner on the right. Grant whipped over an inswinger that was grabbed at the second attempt by Ramsdale.

The Greens desperately needed a steady start to the second period, so it was a massive blow when Oliver Norwood threaded a delightful pass for Sharp to calmly round Cooper before slotting home a second goal for the Blades.

Argyle simply had to stay in the game for a spell if there was to be any chance of a fightback and Cooper read that particular script with a terrific save in denying Brewster from 12 yards after he had been picked out by a Stevens’ cross.

A settling period of possession gave the Pilgrims a chance to gain a foothold in the second half and Lowe sought to build on that mild momentum with the introduction of the fresh legs of Ben Reeves replacing Fornah.

Argyle’s first switch was quickly followed by another double change, with the front duo of Hardie and Jephcott replaced by Dom Telford and Byron Moore, but the Greens were left grateful after Sharp fired over from a good position to keep Pilgrim hopes alive.

The problem was wrestling the ball away from a home team with the confidence you would expect from a Premier League outfit leading the game on their own turf.

When Camara did pinch possession from Norwood, he was tripped 40 yards from goal and the free-kick was fed wide to Reeves for a deep cross that eventually looped to Will Aimson for a sweetly-struck volley was only a fraction wide.

Kean Bryan and George Baldock were introduced for Norwood and Jayden Bogle in a United midfield finding life a little more difficult, as Argyle looked to press the ball higher up the pitch.

The strategy worked perfectly, as Mayor probed and prodded before Moore won the ball on the edge of the area and squared a pass for Camara to steer his low effort into the bottom corner from just inside the box.

Argyle were suddenly flowing with belief, working the ball with a fluid move down the left and a drilled cross from Grant fell to Reeves for a curling effort sent dipping just a foot beyond Ramsdale’s far post.

Cooper kept the dream alive with an excellent save with his feet to deny Stevens after brave defending from Opoku had thwarted Sharp from the first attempt. It was a last involvement for Sharp and strike-partner Brewster, as they were replaced by Burke and McGoldrick.

Argyle immediately resumed their excellent intensity, with Mayor winning a free-kick on the left that was only half-cleared and the Blades were now camped in their own area, as a clipped cross from Grant very nearly found the lively Moore in the six-yard box.

Reeves was conducting the orchestra from midfield and Sheffield United were becoming increasingly concerned in their approach. Frank Nouble replaced Camara for the closing minutes in Argyle’s final push for an equaliser.

The new man soon used his strength to win a free-kick on the left, curled over by Grant that found a way to Moore, but his strike on the half volley was too high to trouble Ramsdale. Burke then replied with a fine effort from distance turned over the bar by an alert Cooper.

Sheffield United had just done enough but Argyle can reflect on an afternoon where they held their own against a full-strength Premier League side.