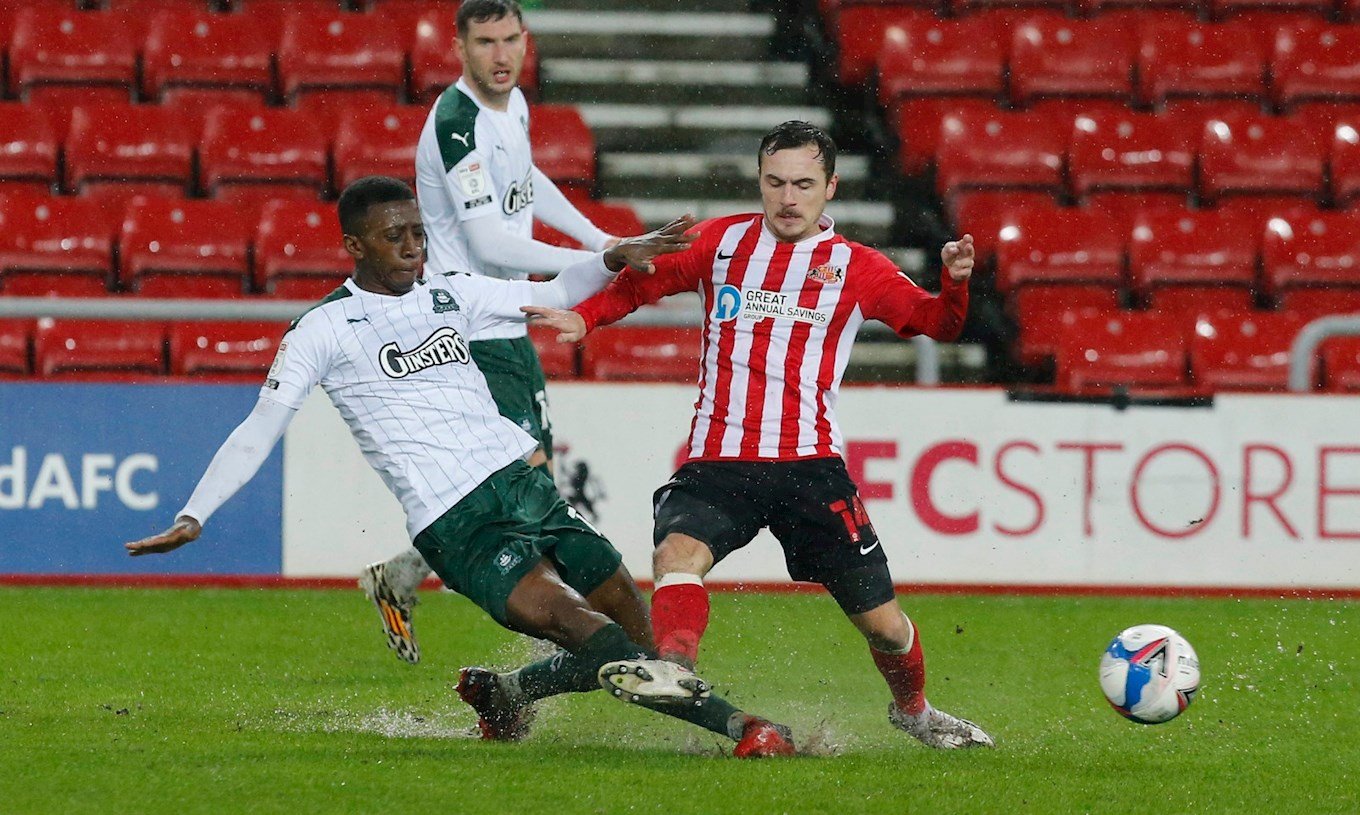 Argyle waited for the longest journey and the biggest stadium to produce their finest away performance of the Sky Bet League One season.

Recent recruit Adam Lewis stunned Sunderland by finishing off a flowing Pilgrim move on 11 minutes and the Greens deservedly retained their lead until the half-time interval.

Aiden O’Brien levelled just after the break but the Greens dusted away that disappointment within five minutes, regaining the advantage with a cute finish from Joe Edwards, and then securing three deserved points with a display full of grit and composure.

Argyle boss Ryan Lowe made one enforced change from the weekend draw with Crewe, handing a full debut to Lewis in place of the suspended Panutche Camara, with Conor Grant shifting into central midfield, allowing the youngster on loan from Liverpool to assume his preferred role on the left.

There was another new face among the Pilgrim replacements in the form of recent signing Niall Ennis and young defender Ollie Tomlinson was also included in the match-day squad, with Byron Moore the absentee from Saturday.

Sunderland manager Lee Johnson made three changes from the weekend win at Wimbledon, where Charlie Wyke scored a fine hat-trick. Carl Winchester made his full debut and there were also starts for Dion Sanderson and Jack Diamond.

Grant Leadbitter, Max Power and Elliott Embleton dropped down to a bench that included former Argyle loan ‘keeper Remi Matthews. Callum McFadzean, another ex-Green, started at left-back for the hosts.

The experienced Aiden McGeady was first to have a pop at goal on a drenched surface at the Stadium of Light, as he jinked inside for a dipping shot with his right-foot sent wide of Mike Cooper’s far post.

The normally impeccable pitch at Sunderland was clearly very heavy under foot and more rain battering the surface would make it a testing night for the players, as well as referee Robert Lewis, who handed the Black Cats a soft free-kick for a challenge by Tyrese Fornah.

The deep cross was safely plucked from the sky by Cooper and Argyle then found their first glimpse of forward momentum with a darting run and shot through middle from Grant, but goalkeeper Lee Burge comfortably pouched the low shot.

Argyle continued their growth in the game with a confident spell of possession and carved open Sunderland with a delightful move involving Joe Edwards, Grant and Danny Mayor.

When the low cross was fed into the near post by Grant, Lewis had ghosted in superbly to pick up a perfect position for a delightful flicked finish past the exposed Burge. It was a lovely goal from the Greens and a great start in the sodden conditions.

The Pilgrims followed up the goal with some typically tenacious work in midfield, denying the home side any time or space to find their rhythm. When Sunderland did find an avenue to attack, Fornah recovered brilliantly to intercept an exchange between Wyke and O’Brien.

The Black Cats did manage an attempt on target when a drilled cross from Diamond was flicked goalward by O'Brien, but Cooper was alert to the threat, turning the ball wide at his near post. Cooper’s next block was even better, brilliantly narrowing the angle to thwart O’Brien from 10 yards.

Despite Sunderland enjoying that spell of mild pressure, Argyle quickly recovered control in the engine room, ably supported by the tireless foraging of front-pair Ryan Hardie and Luke Jephcott, who were covering some serious mileage for the Pilgrim cause.

The Black Cats were forced into a change ten minutes before half-time, with Power replacing the injured Jordan Willis. The new man was sent forward for successive home corners, both of which were defended with admirable composure by the Greens.

Sunderland ended the half in desperate search of an equaliser but a shot from distance was deflected wide by Jerome Opoku, and Bailey Wright glanced a header off target from the subsequent corner.

An excellent opening 45 minutes from the Pilgrims and the second period started in similar fashion, with Argyle constantly hurrying and hassling their hosts.

Unfortunately for the Greens, Sunderland managed to break that incessant press with a neat move down the left and a clipped cross from McFadzean was met by the run of O’Brien, who glanced a clever header beyond Cooper and inside the far post.

Argyle replied with a surge down the left from Lewis and his cross only needed a fraction more juice to reach the run of Jephcott. The Greens then won a free-kick after a lunge by Sanderson but the deep delivery from Grant was defended.

No matter, the Pilgrim lead was restored in fabulous style, as Grant and Jephcott combined for force the ball through to Edwards on the right byline. The skipper cut back inside the area before curling a sublime left-foot finish into the far corner.

It was another delightful goal from the Greens and perfectly summed up the Argyle philosophy under Ryan Lowe, with both wing-backs on target.

The first Pilgrim change arrived just past the hour, when Lewis was withdrawn after appearing to pick up a knock. Ben Reeves was the chosen replacement, slotting into the midfield, with Grant reverting to left wing-back.

Reeves immediately brought renewed brightness to the Pilgrim play, cleverly linking passes through midfield, despite the muddy conditions at the Stadium of Light. Moving forward a department and, while chances were scarce for Jephcott and Hardie, the hard graft never stopped.

Sunderland needed to find a different solution and Johnson turned to his bench with 20 minutes remaining, introducing Elliot Embleton and Chris Maguire for McGeady and McFadzean.

The problem for the Black Cats was that they were up against an Argyle defence displaying wonderful discipline and determination. Lowe opted to freshen up his ranks with a debut for Ennis in place of Jephcott in attack.

It was a sign of the home frustration that Diamond resorted to an ambitious long-ranger, which was comfortable for Cooper, and Johnson opted for the experience of Leadbitter in place of Winchester in the final ten minutes.

Crosses kept coming into the Argyle box and the trio of Opoku, Will Aimson and Kelland Watts kept dealing with the problem. Lowe added some reinforcements from the bench with Scott Wootton and Frank Nouble replacing Fornah and Hardie.

The changes had no impact on the Pilgrim focus and it was testament to Argyle’s organisation that a strong Sunderland side blessed with an array of attacking options began to look like they had run out of ideas in the closing stages.

Even a slightly excessive six minutes of stoppage time could not disrupt the Argyle concentration and a brilliant victory that nicely sets up a weekend trip to Premier League Sheffield United in the FA Cup.