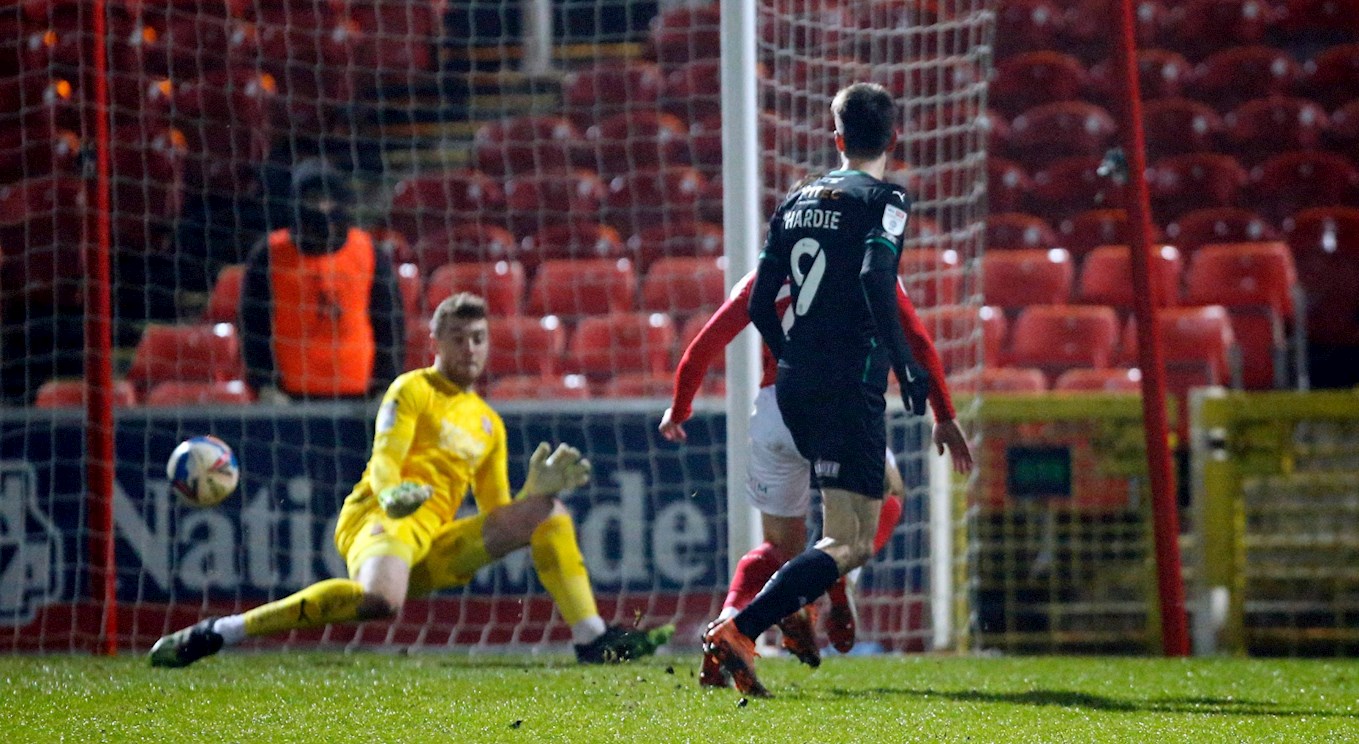 Argyle completed a hat-trick of away trips in the past seven days with an outstanding display in dominating Swindon Town from start to finish at the County Ground.

The Pilgrims were defensively sound, energetic and creative in midfield, and clinical in attack. The near-perfect performance celebrated an opening goal on 36 minutes, when Panutche Camara calmly slotted home after making one of many bursts into the Swindon box.

Argyle never once gave the Robins a glimmer of hope and Ryan Hardie confirmed the victory with another assured finish midway through the second period, as the Greens continued the sparkling form shown at Sunderland and Sheffield United.

Pilgrim boss Ryan Lowe stuck with the same side that produced an excellent display before going down to that narrow FA Cup defeat at Premier League Sheffield United on Saturday. There was, however, a fresh face on the bench, with Niall Ennis returning after being cup-tied.

Swindon manager John Sheridan, formerly of the Pilgrim parish, made two changes from the weekend draw at Charlton, with Rob Hunt and new loan signing Tyrese Omotoye coming in for Kieron Freeman and ex-Green Joel Grant.

After the rigours and excitement of long trips to Sunderland and Sheffield, it was a refreshingly gentle start to proceedings on a cold drizzly night in Wiltshire, with Argyle content to warm their way into the game with a confident period of possession.

When the game did burst into life, it was all down to sharp forward play between Hardie and Luke Jephcott, exchanging headed passes before a desperate clearance by the retreating Swindon skipper Dion Conroy.

Conor Grant whipped over the corner and Jerome Opoku, fresh from signing a loan extension to the end of the season, found space for a header that was bound for the net before it was headed clear on the goalline by Matty Palmer.

The Pilgrims continued to exert their attacking authority with Grant, again, fizzing over a cross from the left that found a way to opposite wing-back Joe Edwards, who cut inside for a shot scooped over the bar.

There was a worrying moment for Grant in the next foray, as he was on the receiving end of a crunching tackle from Hunt and the Pilgrim wide-man needed treatment before limping back into action.

When Swindon did win a corner to briefly change the pattern, Argyle immediately cleared and broke with a pace to win a corner at the other end just seconds later, largely thanks to the pace and willing runs of Hardie.

Argyle were swarming all over their hosts in the midfield area and Green voices were raised in question when Conroy bundled over Jephcott in the penalty area. Referee Robert Madley waved away the spot-kick claims for a challenge that certainly looked clumsy at first glance.

The Pilgrim press was simply outstanding and too much for the Robins, as Danny Mayor wrestled possession 40 yards from goal and released a slide-rule pass for Hardie, who had sneaked into the area, but his final touch allowed goalkeeper Mark Travers time to smother ball before a shot could be unleashed.

Mayor, again, was superb in creating the next chance, sauntering to the byline and cutting the ball back to Edwards, but his shot was deflected over after being crowded out by the scrambling home defence.

It was a first half of complete control for the Greens and their reward arrived ten minutes before the break, when Mayor threaded a pass down the line for Grant to deliver a first-time cross with his left foot.

Camara had made a late run to the back post, had time to bring the ball under his spell, and steer a calm left-foot finish beyond the reach of Travers and inside the opposite upright.

The Robins tried to increase their tempo and attacking impetus in the closing minutes of the first period, but it was a measure of Argyle’s grip on the game that young custodian Mike Cooper had been blissfully quiet.

Sheridan shuffled his pack at the interval, introducing Matt Smith and Taylor Curran for Hallam Hope and Scott Twine, but the change in personnel had little effect on the pattern of the game, as Argyle conjured another opening for Jephcott to have a pop from distance that was blocked by Conroy.

Mayor and Edwards both had shots from the edge of the Swindon area after another run in behind from Hardie had stretched the home defence, while the likes of Camara and Tyrese Fornah retained control of the engine room.

The Robins did have an opening when they won a free-kick 22 yards from goal but the effort from Dominic Thompson was lashed well over the bar.

Mayor was soon delving back into his bag of tricks, sliding a lovely ball across the area for the run of Camara, who again took a touch to settle his options and then delivered a low shot well charged down by Thompson.

Argyle were virtually camped in the Swindon half and the only thing missing was a second goal to give their dominant display the measure of comfort it deserved.

The problem with a slender lead is that it always gives the opposition hope and Diallang Jaiyesimi forced the first save from Cooper after a deflected effort, and it was a tremendous block from the young ‘keeper, as Brett Pitman emerged from the home bench to replace Omotoye.

Seconds later, however, Argyle did have their cushion, as Camara broke brilliantly through the middle from the Swindon corner, found a pass for Hardie, who had the pace to burn off any challengers and comfortably slammed the ball past a stranded Travers.

Jephcott joined the fun with a jinking run and low cross aimed toward Camara but Swindon were just about able to clear the danger. The pleasing aspect was yet another penalty-box surge from the impressive Camara.

It proved to be a final contribution for Jephcott, as he was replaced by Ennis for the final 20 minutes. Swindon, for their part, were trying everything to build some momentum but continually came up against a Green defensive wall in the shape of Opoku, Will Aimson and Kelland Watts.

Hardie was soon causing more chaos at the other end and his rising drive from 15 yards was only a fraction too high. Ennis then had a shot on the turn deflected wide for yet another Pilgrim corner.

Byron Moore and Ben Reeves were given their chance to shine in the final ten minutes, replacing Grant and Fornah. Moore quickly made his mark with a run down the left and pass for Hardie to win corner number 11.

Reeves took his turn with a beautiful pass for Mayor to rifle a fine finish into the bottom corner but Pilgrim celebrations were cut short by an offside flag, denying Argyle’s number 10 the goal his performance completely warranted, as he was then withdrawn for Scott Wootton, while Frank Nouble replaced Hardie.

Aimson came within a whisker of adding spectacular gloss to the victory with a 35-yard rocket sent whistling just past the top corner.