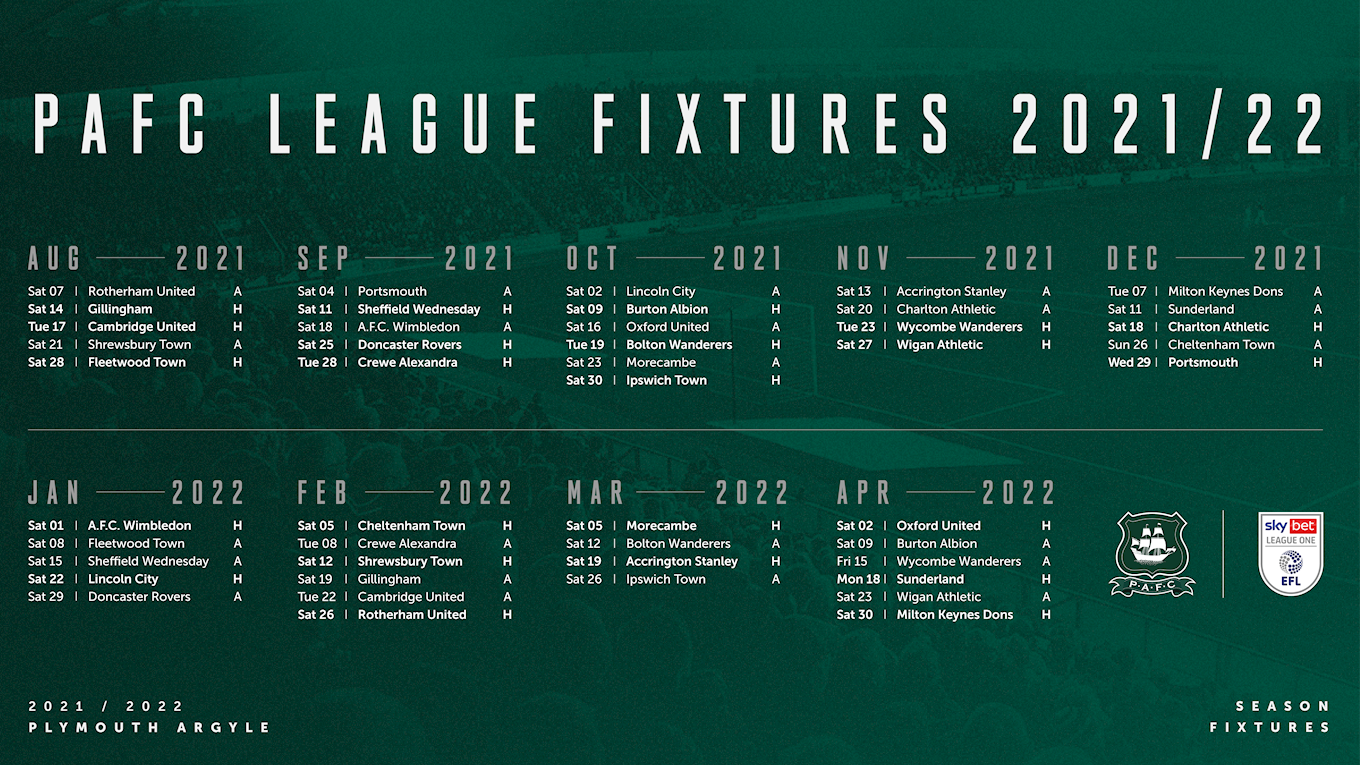 Argyle will kick off their 21/22 Sky Bet League One campaign with a trip to Rotherham United on Saturday, 7 August.

The Greens’ first home league encounter of the season – hopefully in front of a bumper Home Park crowd – will occur one week later, against Gillingham. Sandwiched in between these two games is the Carabao Cup first round, with the draw taking place later on Thursday.

Three days after taking on the Gills, Ryan Lowe’s Pilgrims will host newly promoted Cambridge United, before rounding off August with a trip to Shrewsbury Town on Saturday, 21 August and a home tie against Fleetwood Town seven days later.

October’s action begins with a lengthy trip to defeated play-off finalists Lincoln City, before a home clash with Burton Albion on 9 October. The Greens travel to Oxford United seven days later, before hosting promoted Bolton Wanderers in midweek action on Tuesday, 19 October. The month is completed by a trip to Morecambe and a home tie against Ipswich Town.

Argyle kick off November with an Emirates FA Cup first round tie on the weekend of November 6/7, before returning to league duties against Accrington Stanley at the Wham Stadium. A trip to the Valley to take on Charlton Athletic follows, before a home double-header against Wycombe Wanderers (Tuesday, 23 November), and Wigan Athletic (Saturday, 27 November).

Should the Pilgrims progress to the second round of the Emirates FA Cup, that will occur on the first weekend of December, before back-to-back trips to Milton Keynes Dons (Tuesday, 7 December) and the longest haul in the EFL to the Stadium of Light on Saturday, 11 December.

The Christmas and New Year period offers some exciting festive fixtures, beginning with a tie against Charlton Athletic at Home Park on Saturday, 18 December. The Greens are once again away on Boxing Day, but can take some comfort from it being their shortest trip of the season - to Cheltenham Town -  before closing out 2021 against Portsmouth at Home Park on Wednesday, 29 December.

2022 begins with a New Year's Day tie against AFC Wimbledon at Home Park, before a trip to Fleetwood Town on Saturday, 8 January, but the fixture will be rearranged should either Argyle or the Cod Army reach the third round of the Emirates FA Cup. A week later, the Pilgrims travel to Hillsborough to face Sheffield Wednesday. January is closed out with ties against Lincoln City (home) and Doncaster Rovers (away) on 22 and 29 January, respectively.

February begins at home to Cheltenham Town on Saturday, 5 February.

A visit to Crewe Alexandra on Tuesday, 8 February follows, in arguably the most challenging weeks of the season for Ryan Lowe’s side, travel wise. A home tie against Shrewsbury Town (12 February) precedes trips to Gillingham and Cambridge United on Saturday, 19 February and Tuesday, 22 February, before the month ends with a home tie against Rotherham United on Saturday, 26 February.

March contains four fixtures, kicking off with a home tie against Sky Bet League Two play-off winners Morecambe, before a trip to Bolton Wanderers the following week. Argyle host Accrington Stanley on Saturday, 19 March, ahead of a trip to Portman Road to face Ipswich Town a week later.

The final month of the regular Sky Bet League One campaign begins with a home tie against Karl Robinson’s Oxford United on Saturday, 2 April, and the Greens travel to Burton Albion a week later. In the traditional Easter Bank Holiday fixtures, Argyle travel to Wycombe Wanderers on Good Friday, and host Sunderland on Easter Monday.

The season’s final away trip is to face Wigan Athletic at the DW Stadium, before the campaign is concluded with a home tie against Milton Keynes Dons at Home Park on Saturday, 30 April.

Please note: These fixtures are in draft stage, and further amendments may be made by the EFL in the coming days.

Season tickets are on sale now ahead of the 21/22 Sky Bet League One campaign. Click here to get yours.

Want to upgrade your match day experience at the Theatre of Greens? Hospitality packages are available for all of the Pilgrims' home ties in the upcoming campaign, while sponsorship options are also available.