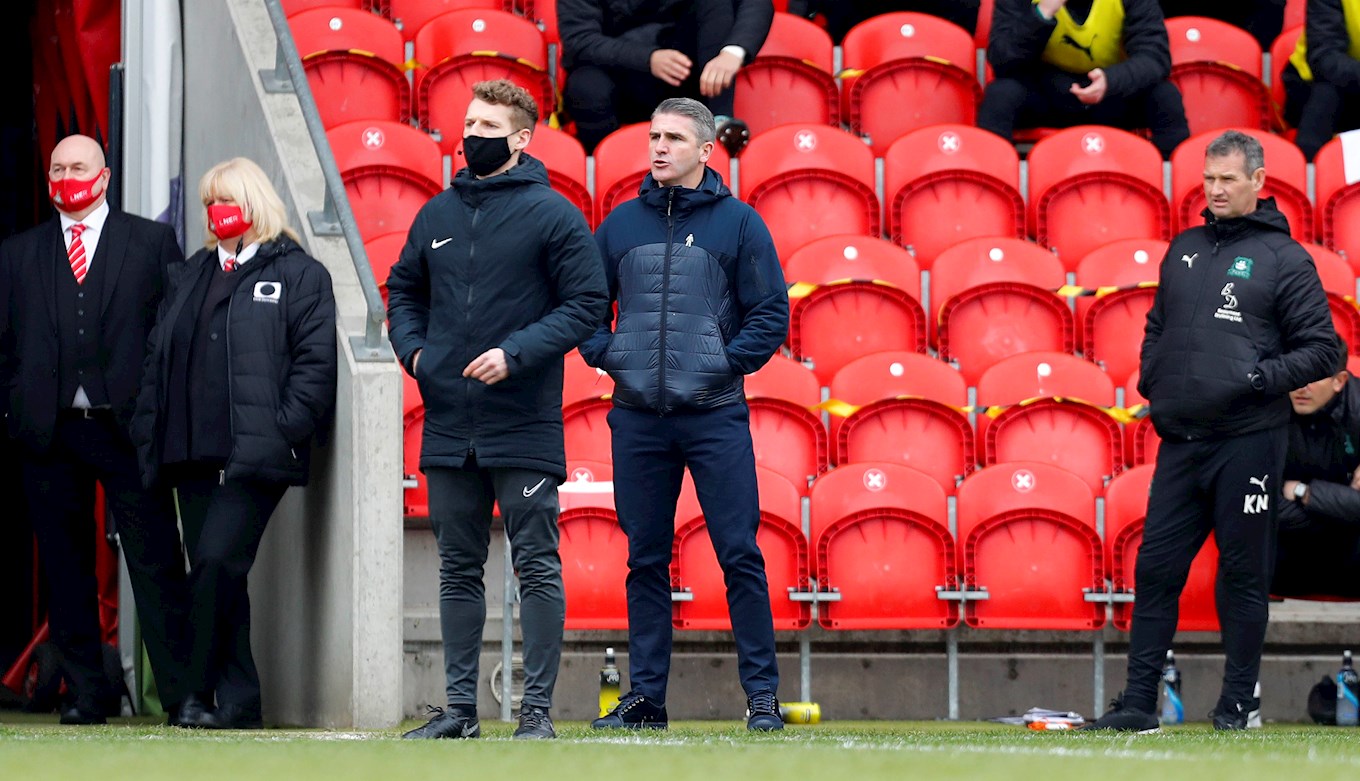 Argyle manager Ryan Lowe expressed his frustration with the defensive lapses that led to the 2-1 defeat at Sky Bet League One promotion chasers Doncaster Rovers on Saturday.

Despite garnering nearly 60% possession and amassing 20 attempts at Rovers’ goal, the Pilgrims were undone by a set piece goal early in each half. Striker Niall Ennis reduced the deficit on 49 minutes, converting Conor Grant’s cross against his former club.

Lowe said: “[The players have] been tagged a man to pick up from corners against them and we’ve lost our man from that, but we had a good start up until then. You can’t give anyone free headers in the six-yard box, twice, and that’s what we’ve done which has cost us.

“We need to keep the back door shut and we need to make sure we concentrate on these set plays and corners because at the moment, it’s sort of killing us.

The Pilgrims created opportunities in either half, with Joe Edwards firing over from close range with the score at 1-0, but it was Ennis’ strike that proved the catalyst for the Greens’ most dominant spell.

Despite generating a number of opportunities in the second period, they were unable to complete the comeback.

Lowe said: “I think the [statistics] say we probably should’ve won the game, but I want to actually win the game, I don’t just want stats and everything else that goes with it.

“We created plenty of chances - that’s what we wanted as we haven’t created as many of late - today we did, but it just didn’t go in.”

Having gone weeks unbeaten at the start of 2021, Lowe is urging his players to rediscover their defensive resilience to launch another winning run.

He said: “Consistency is one of our biggest hinderances at the moment. What we’ve got to do is start keeping the back door shut, because going forward we look okay. We’ll address it, we’ll sit down as a group and we will move forward with it because that’s where we’ve got to be.

“They’re a good group and they listen and learn; they listen to the feedback we’re giving them.

“They’re disappointed in there now. I’ve told them we will get back to work tomorrow and Monday, and now we’ve got to put a game plan together for Wigan [on Tuesday night]. We’ve got to make sure they listen, take on instructions and we have to make sure we put it right now that we’ve lost two on the bounce, we don’t want to make it three.”

In positive news, midfielder Lewis Macleod returned to the pitch in the final twenty minutes of the game following a long absence, and defender Jerome Opoku played the full 90 minutes after missing the midweek trip to Northampton with an ankle injury.

“We knew [Jerome] was going to be okay. We will have to recover him quickly and make sure he’s right for Tuesday. In terms of Lewis getting twenty minutes, he’s nearly ready, we didn’t want to throw him in at the deep end but he’s another body we can add to the starting eleven if needed.”