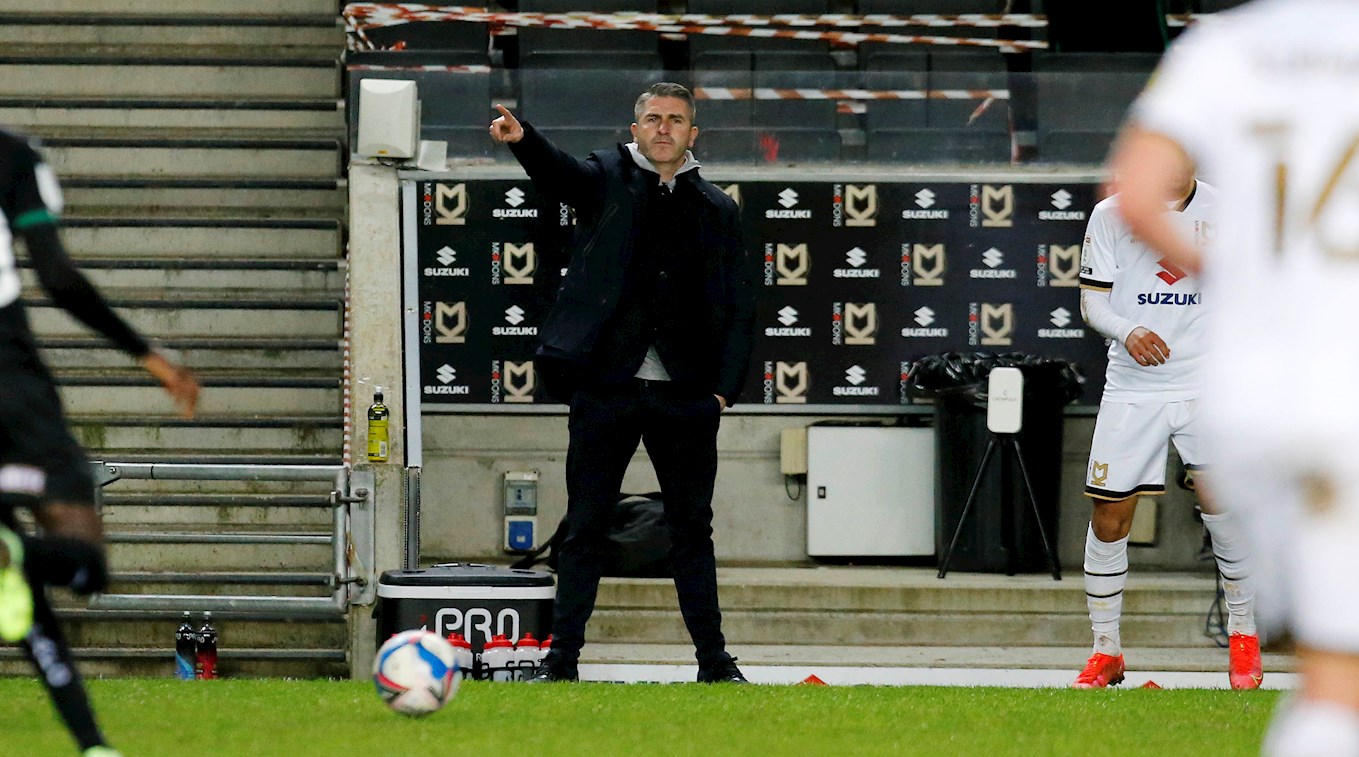 A world-class strike from Conor Grant countered Cameron Jerome’s first-half goal for the Dons, and looked to be enough to secure a valuable draw for the Pilgrims in Buckinghamshire. However, Green hearts were broken at the death, when Scott Fraser converted a spot-kick on 89 minutes after Joe Edwards was adjudged to have blocked a cross with his arm.

Lowe said: “I thought the game plan was nearly executed; we’ve obviously been on a bad run of not winning. Albeit we should’ve been 2-0 up at least in the first half, we had some great chances.

“Everyone says: you score the first goal you go on and win, and nine times out of 10 that happens. That wasn’t to be, but we kept going, kept fighting for each other, kept working our patterns when we had the ball. We didn’t have much possession, but we still had good chances.

“We had 10 shots, five on target, so that’s pleasing. In terms of the overall commitment, the boys were excellent, and we’ve been done by a decision that only the referee can answer.

“We were very good in possession and out of possession. If they continue to play like that, we will be fine.”

Although the result was lacking for an Argyle side down on their luck, Lowe took heart from his side’s efforts.

He said: “[The players] have showed me what it means to them. They’re working hard in training; we’re trying to rest and recover them quite a bit but they’re taking on everything we’ve asked them to do.

“The energy levels were very good considering the lads blew up towards the end, but I couldn’t have asked for more.

“We freshened up, Tyrese [Fornah] came off with cramp and Niall [Ennis] had ran his socks off; he was excellent.

“Once they were out on their feet, we’ve got to get them off the pitch. If we didn’t take them off at that time, we could have potentially lost them for a long time. We will have to have a look at them, see how they are and how they recover.”

Despite the Pilgrims’ difficult run of results, Lowe has faith in his side to bounce back and end their Sky Bet League One campaign strongly.

“It is tough at the moment; the lads are down, but that’s my job to pick them up. Our aim is to try and finish as high as we can and collect as many points as we possibly can.

“We’ve got ten games to go now, 30 points to play for. We’ve just got to keep working hard, whether that’s on the training pitch or in the classroom.

“We’ve got to get a little run together and start picking up some points.”