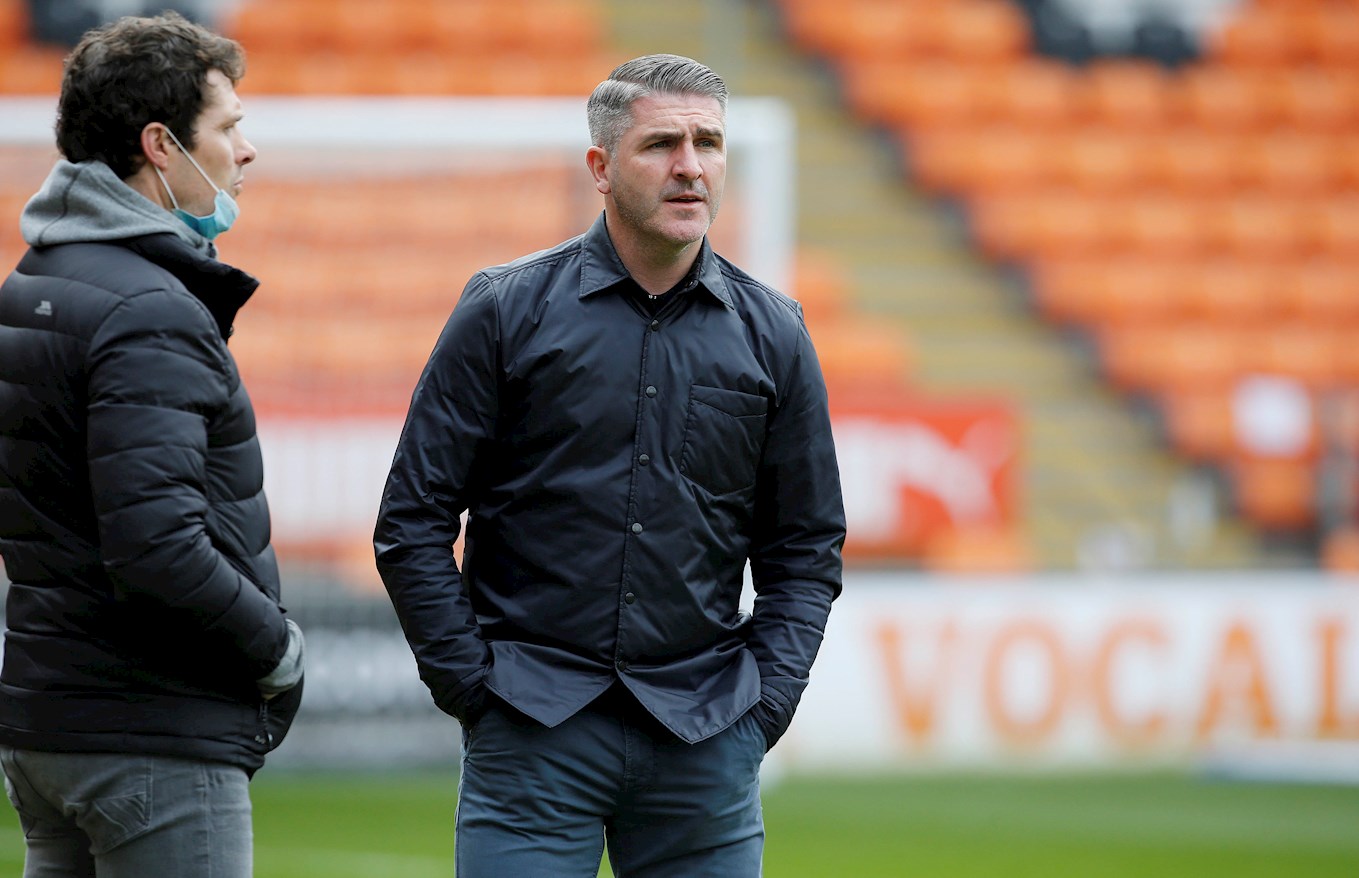 Argyle manager Ryan Lowe expressed delight at his team’s first half performance in the 2-2 Sky Bet League One draw at Blackpool, and admitted he was disappointed that the team were not further ahead at the half-time whistle.

A dominant opening 45 minutes at Bloomfield Road saw the Pilgrims outshoot their play-off placed opponents by a margin of 11 to one, but they only had a single goal advantage to show for it at the interval, courtesy of a Ryan Hardie strike.

Despite their early dominance, the Pilgrims were immediately pegged back in the second half through a scrappy Sullay Kaikai equaliser on 47 minutes, before Jerry Yates’ 64th-minute penalty saw the Seasiders ahead. With the game looking as though it had slipped away, Joe Edwards netted a superbly-taken equaliser in added time to see the points shared.

“It’s pleasing that the lads kept going to the end, doing the right things, keep playing the right way and finding a way, and we found a point today.

“We knew Blackpool were going to come out, get on the front foot and get at us because they’re a good team and they’re in good form, but the lads showed real guts and determination.

“We’re now two unbeaten, we got a win at home and a point away from home, that’s four points, [which is] fantastic.”

Lowe was keen to praise the impact of his two goalscorers at Bloomfield Road. Hardie marked his return to the starting 11 with his fifth goal of the season, and a career 50th strike, while captain Edwards’ late leveller takes the wing-back to an impressive eight goals in all competitions.

Lowe said: “When you’ve got your goal-scoring [Luke] Jephcott who’s got 18 goals and Niall [Ennis] performing the way he’s been performing, Ryan [Hardie] has had to wait for his chance. I said to him today: ‘it’s an opportunity for you, go and take it’ and he certainly did that, he's scored a fantastic goal.

“[Joe Edwards] has been fantastic. He’s led the group since [Gary Sawyer] has been injured, he’s been a pleasure to work with. He’s professional, he does everything right and I think that’s eight goals now.

“We’ve got great lads, terrific players; top professionals who do the things we ask them to do.”

Lowe and his men have now got just under a week until their next fixture, where they will face AFC Wimbledon at Home Park on Good Friday.

Lowe said: “[The players] get a bit of rest and recovery, but [then] we are back to work. We’ve got freshness coming back - Lewis Macleod was on the bench today and Jephcott’s come back from internationals, Sawyer travelled with us today, which is nice, Kelland Watts will be back next week and Jerome Opoku will be back so we’re getting fresh bodies back.

“We will make sure they’re rest and recovered and [then] back to the training ground to do what we need to do.

“Four points out of the last two games, just keep moving on and keep building and keep collecting the points and see where it takes us."