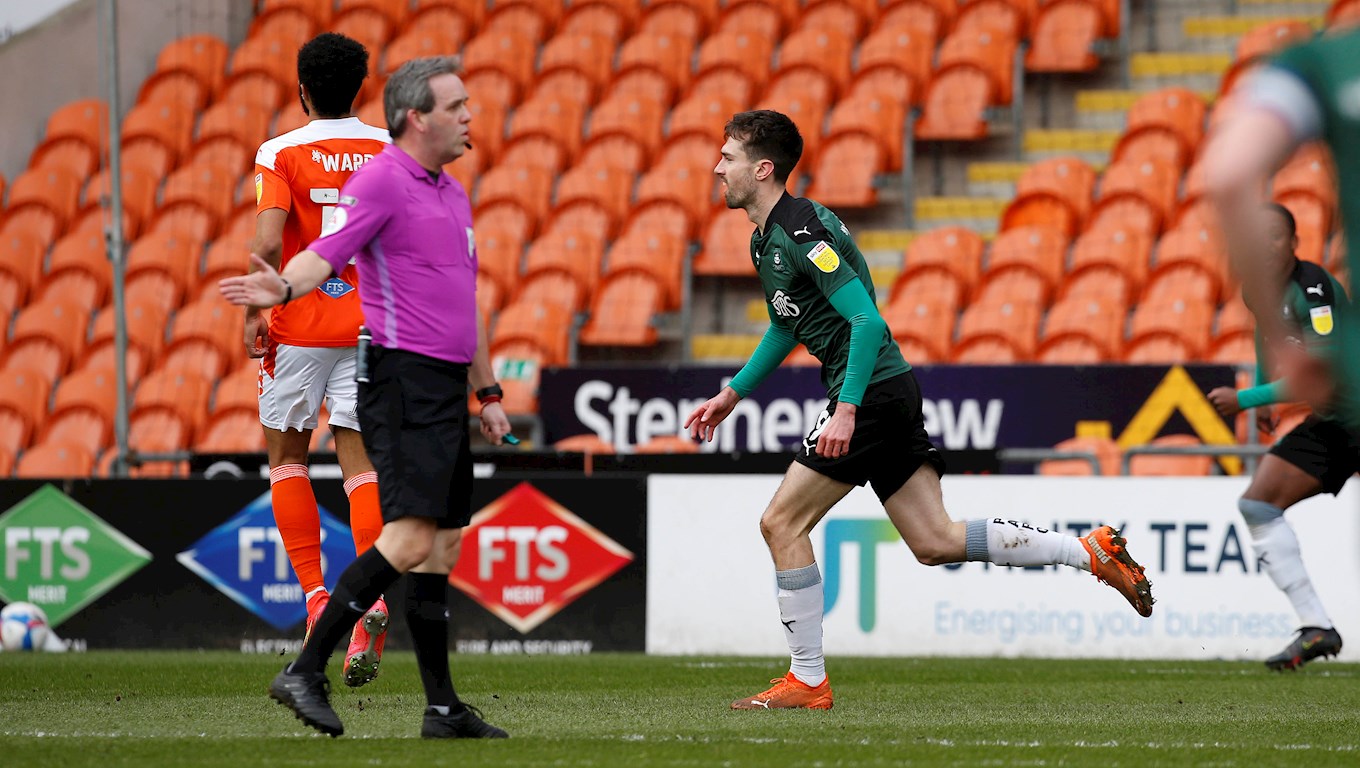 Argyle striker Ryan Hardie admitted that there were mixed emotions in the Pilgrims’ dressing room after a rollercoaster battle with Blackpool finished 2-2 at Bloomfield Road.

The former Seasider opened the scoring for Argyle on 12 minutes, but that was the only goal of an opening 45 dominated by the Greens.

The in-form hosts struck back just moments into the second half through Sullay Kaikai, before. Jerry Yates’ penalty looked to be sending the Pilgrims home empty handed. In second-half stoppage time, captain Joe Edwards ghosted in off the right flank to convert Conor Grant’s cross and earn a deserved draw for Ryan Lowe’s side.

Hardie said: “The way the game went, I think to get a goal in the last minute always gives you a bit of excitement when you get back into the game. But, coming in at half-time, we’re feeling like if we do the same thing second half, we win the game – so in that sense we’re disappointed.

“If we keep a clean sheet we win, but the circumstances of the game, from 2-1 down to get the draw was a bit more pleasing than getting beat.”

Despite not taking all three points from Bloomfield Road, Hardie feels that the team’s overall performance underlines the Pilgrims’ ability to match it with anyone in the division on their day.

He said: “We go confident into every game. We knew what Blackpool are capable of, they’re in a good position in the league, they’re on a good run of form, but we knew if we come and play our stuff, we’ll get chances.

“I think, in the first half, we had 11 shots. Obviously, we’ve got to do a bit better with the chances that we get, but to come and get that at a place like this is obviously pleasing for us.”

Having had to wait patiently for starting opportunities due to the form of top goalscorer Luke Jephcott and January addition Niall Ennis, the Scottish striker marked his return to the starting 11 with his career 50th competitive goal.

On his opener, he said: “I’ve run down the line and, I’ll be honest, I’ve tried to square it to Niall, but it’s taken a wee bobble. When it came back off the post, there was only one thing in my mind. I had Pan [Panutche Camara] screaming that he was coming onto it, but I’m not leaving it inside the box, and luckily it went through the defender’s legs.

“It’s massive, 50 goals and hopefully a lot more to come. I’ve been waiting on this for I don’t know how many games, since Swindon. I’ve been trying to get it since then, but hopefully I can kick on and keep going.

“It’s obviously a big game to come into, former club, it gives you an extra bit of oomph to go and get the goal. Every player wants to play, it’s frustrating when you’re on the side-lines, but we’ve got a good relationship, the three strikers, me ‘Jeps’ and Niall, we’re always keeping each other going, and if the chance comes, we know each other will take it.”