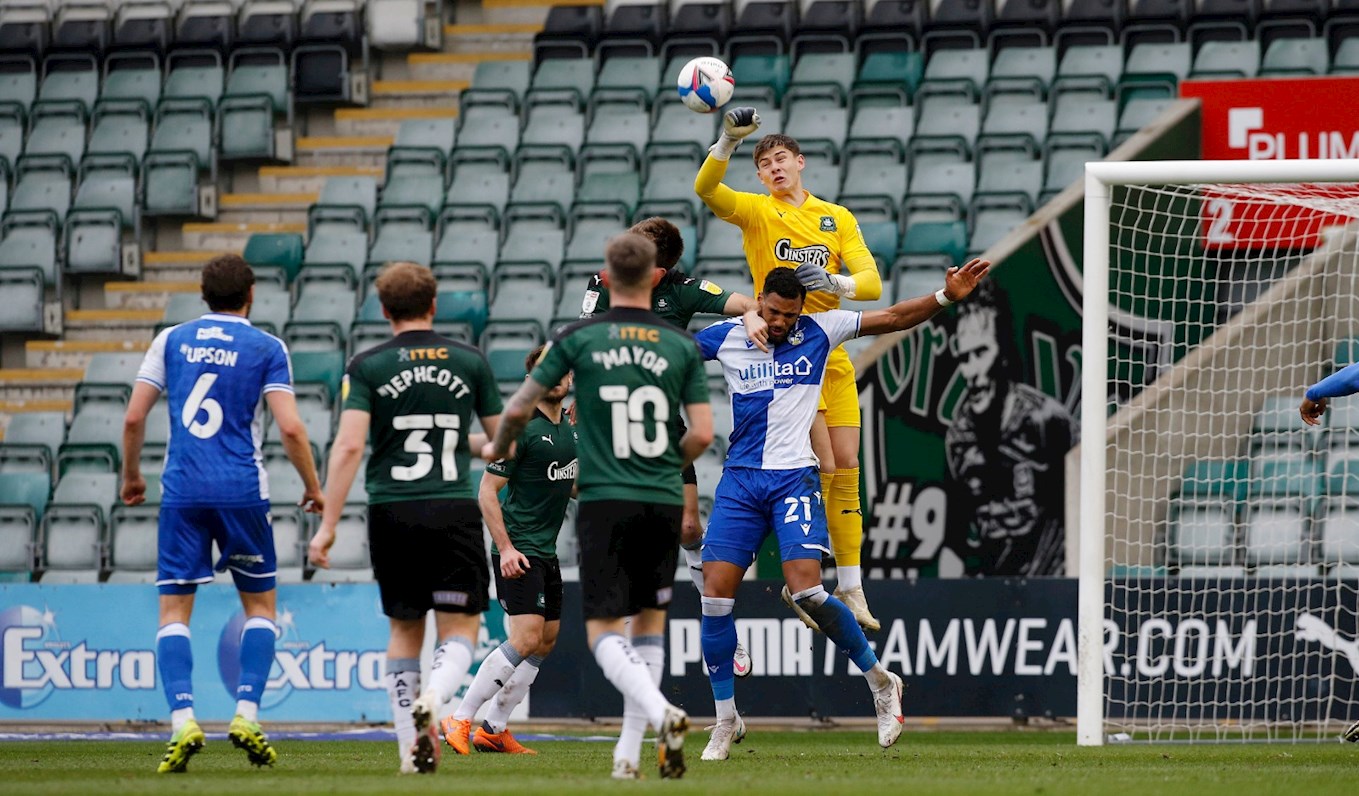 Two goals from an inspired Niall Ennis ensured all three points remained at Home Park to end a tricky run of results for the Pilgrims.

Despite the bad luck over recent weeks, Argyle have still produced good performances, and the belated reward arrived when Ennis slotted home the opener on seven minutes.

The Pilgrims proceeded to dominate the first period and grabbed a crucial second when Ennis fired in a tremendous finish on the stroke of half-time. The second half was controlled with admirable assurance by the Pilgrims and, while Ennis deserved the headlines, it was a fine team display.

Argyle boss Ryan Lowe made one enforced change from the last-minute defeat at MK Dons on Tuesday, with Kelland Watts missing out for the first time this season after picking up a knock, which opened the door for Adam Lewis to make a return.

It also meant a system reshuffle for the Pilgrims, with a flat back four that saw Jerome Opoku partner Will Aimson in the middle. Joe Edwards and Lewis operated as conventional full-backs behind a midfield duo of Conor Grant and Tyrese Fornah.

Danny Mayor and Panutche Camara was given the freedom to roam inside from the wings behind a front two of Luke Jephcott and Ennis, with youngsters Klaidi Lolos and Ollie Tomlinson included on the bench.

Bristol Rovers suffered heartbreak in midweek, losing 3-2 at Charlton after leading the game 2-0, but manager Joey Barton opted for just the one change to his side, bringing in defender Max Ehmer for Sam Nicholson. There was also the commentator’s curse of a Luke McCormick in midfield for Rovers and his namesake the replacement custodian for Argyle.

The visitors were first to find an opening, when Jonah Ayunga controlled a looping ball on his thigh and swivelled sharply for a volley that was fisted clear by the perfectly-positioned Michael Cooper.

Argyle responded with the opening goal, and delightful work from Grant to slide a pass inside the full-back for Lewis to stand up a cross to the far post. Goalkeeper Jordi van Stappershoef managed to get a paw on the delivery but Ennis was in the right place to drill the loose ball into a waiting net.

It was an assured low finish from the young striker, who was excellent at MK Dons in midweek, and a superbly crafted goal from the Pilgrims. The good work continued with another flowing move, culminating in a scooped cross from Edwards that van Stappershoef just about managed to claw away.

There was a terrific brightness in Argyle’s play, with Lewis a constant thorn from the left, this time whipping over a deep cross towards Edwards, who was denied a clear header on goal by the intervention of Ed Upson.

More great work between Lewis and Ennis led to a low cross from the full-back that just refused to fall kindly for Camara, as his brace of slightly skewed efforts were repelled by an increasingly fraught Rovers’ defence.

The Pirates managed to regroup with a run into the right channel from Ayunga and his cut-back to McCormick looked a glorious chance to level until Grant intervened with a goal-saving challenge.

After a period of midfield sparring, Argyle produced a lovely passing move, which almost inevitably ended with a Lewis cross from the left and Grant was alive to the half-clearance, stabbing a right-footed shot from 18 yards that proved comfortable for van Stappershoef.

The Greens then had a super chance to extend the lead on 32 minutes, when a Grant free-kick was floated into the box and Opoku had got the right side of his man, but was just unable to generate sufficient power to seriously trouble van Stappershoef.

A slick free-kick routine from the visitors did provide an opening in the right channel for a cross but Camara muscled the ball clear, and Opoku then dealt with the subsequent problem in a similar area. The next cross from Rovers saw Cooper fist clear and Aimson covering behind to clear when the ball was returned.

A seemingly decent end to the half from Rovers led to a Zain Westbrooke cross headed over from a good position by Upson. Argyle looked to restore the status quo with a Mayor pass down the line for Lewis, who only just missed the runs of Ennis and Jephcott.

The next attempt did find its mark perfectly, as Lewis fizzed in another super low delivery after a Mayor pass and Ennis took a touch, spun sharply before steering a fabulous finish into the bottom corner. It was an outstanding striker’s finish and just reward for a young forward in sparkling form.

The onus was on Rovers to find something in the second half and Barton removed Ehmer for Josh Hare in an attempt to change the pattern of proceedings, but the impetus remained in favour of the Pilgrims, with Mayor lashing a long-range drive over the bar.

The Pirates came back with a sharp turn and pass from Brandon Hanlon for McCormick to take a shot from the edge of the box, which took a deflection, making the resultant fabulous save from Cooper even more impressive.

Argyle replied with a dipping effort from Edwards safely gobbled up by van Stappershoef. Grant then forced a corner with admirable tenacity and it was his set-piece move that Rovers only just glanced clear from the far-post run of Aimson.

A patient Pilgrim move was next worked down the right, with Camara and Jephcott working the room for Edwards to have a shot blocked by the visiting defence. Ennis and Mayor forced further blocks from the subsequent corners.

The Greens had Rovers on the ropes and a spell crying out for the third goal. The irrepressible Ennis very nearly delivered, turning his man from a long ball and rifling a terrific left-foot half-volley against the outside of the post.

As the game edged toward the final 20 minutes, McCormick tried a grasscutter that was turned wide by the excellent Cooper and Lowe decided the time was right for a freshening of the ranks, introducing Ryan Hardie for Ennis, while Erhun Oztumer replaced Westbrooke for the Gas.

Rovers had no choice but to roll the dice in the final ten minutes, withdrawing Upson and Alfie Kilgour for James Daly and David Tutonda, although it was very nearly game over after a sublime change of direction by Mayor led to a dinked cross from the byline that somehow refused to fall for Hardie in the six-yard box.

It was approaching desperation time for the visitors but a superb tackle by Edwards, followed by an Aimson header, ensured the Pilgrims kept their goal intact.

Byron Moore replaced Jephcott in the dying seconds, as the Greens happily played out a very satisfactory afternoon at Home Park.