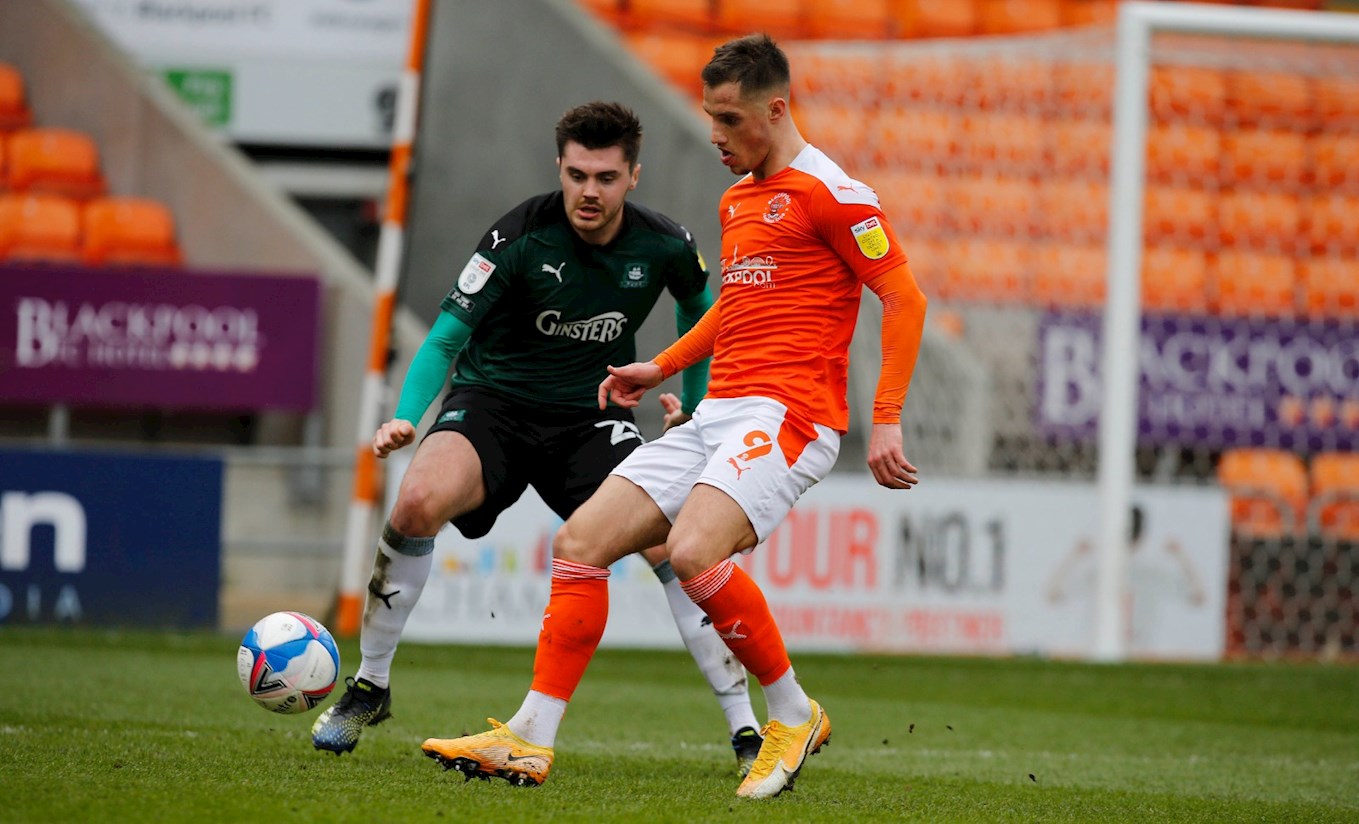 A late equaliser from Joe Edwards gave Argyle a draw that looked like it could have been more after a dominant first-half display at Blackpool.

The Pilgrims were outstanding in the opening 45 minutes, deservedly leading through a well-executed Ryan Hardie finish against his former club.

A sloppy opening to the restart presented Sullay Kaikai with the Blackpool leveller and the hosts turned things fully around when Jerry Yates converted a penalty on 64 minutes.

The Greens gradually recovered their composure and snatched a super point when Edwards expertly volleyed home a Conor Grant cross in the first minute of stoppage time.

Argyle manager Ryan Lowe made two changes from the fine win over Bristol Rovers last weekend, drafting in Sam Woods for the suspended Jerome Opoku and Hardie started ahead of Luke Jephcott, who played an hour for Wales Under-21s on Friday.

Jephcott, who scored the only goal in the opening day defeat of Blackpool at Home Park, was deemed fit enough for a place on the bench, alongside a returning Lewis Macleod.

Blackpool boss Neil Critchley had the luxury of naming the same side that recorded a terrific 3-1 win over Peterborough in midweek, stretching the unbeaten run for the Tangerines to ten games.

The opening two minutes brought a nasty collision between Woods and Kalkai, as the duo clattered into the rails on the side of the pitch, thankfully both emerging relatively unscathed from an early shock to the system.

From a purely football perspective, it was a fairly scrappy start, but then burst into life with an Edwards cross controlled beautifully by Niall Ennis and his sharp shot on the turn rattled against the far post with Chris Maxwell completely beaten.

It was an attempt that highlighted the understandable confidence of Ennis, who scored both goals against Bristol Rovers, and so very close to an Argyle lead. Blackpool replied with a free-kick won 22 yards from goal but Luke Garbutt fired his shot into the Pilgrim wall.

Moments later, Argyle were in front and it all started with a delightful Edwards ball into the channel for Hardie, who took a touch and dragged a low shot across goal that was just about fended off by Maxwell.

The loose ball bobbled to Ennis for an effort against the post from an extremely tight angle. Hardie, totally alive to the situation, picked up the loose ball and steered an accomplished left-foot finish into the bottom corner.

It was a terrific start for the Greens and they continued that impetus by swarming all over Blackpool in midfield, thanks to the diligent hard work of Tyrese Fornah, Grant, Panutche Camara and Danny Mayor.

There was a pleasing shape and tenacity about the Pilgrims, as Edwards won the ball in midfield and threaded a pass wide for Camara to send in a cross that struck Garbutt in an awkward position, prompting polite penalty enquiries from Argyle.

A powerful run from Ennis won a free-kick in the centre circle, which was taken quickly for Adam Lewis to deliver a cross from the left and Camara was only narrowly off target with his towering downward header.

It was all Argyle in an attacking sense, with slick work between Edwards and Camara leading to a corner just before the half-hour. Lewis whipped over the cross and Garbutt did well to head clear under pressure from Will Aimson.

Blackpool finally got the chance to test Michael Cooper when Grant Ward picked up on a misplaced pass and fired a super drive from distance that was turned wide at full stretch by the Pilgrim custodian.

The subsequent corner was cleared on the line by Mayor and Argyle’s no.10 was soon back at the other end, looping a cross to Ennis, who cushioned the ball into the path of Edwards for a half-volley launched well over the bar.

Mayor then intercepted a pass from Kenny Dougall, surged through the middle for a shot deflected wide to Hardie, who worked the ball back inside to Grant, via Ennis, for a searing shot well held by Maxwell.

Super work from Fornah gave Mayor room for a slide-rule pass to Hardie and he demonstrated excellent pace to reach the ball, cut inside on the edge of the area and attempt a cute outside of the boot flick that was gobbled up by Maxwell.

Despite the gusty conditions at Bloomfield Road, Argyle were playing fabulous football and, defensively, were in complete control of the Blackpool attacking threat.

Argyle ended a supreme first half with another sublime move, starting and ending with Grant, who lashed a shot narrowly wide after tremendous first-touch football that also involved Hardie, Edwards and Camara.

Critchley reacted to the situation by withdrawing centre-back Jordan Thorniley for Daniel Gretarsson at the interval and the home side were almost immediately level in frustrating fashion.

Demetri Mitchell picked up on a long ball into the right channel and squared a pass for Kaikai to rifle a low shot that somehow squirmed through a sea of Argyle defenders to sneak past Cooper. While the goal was very harsh on the Pilgrims for their first-half display, it was a scruffy equaliser to concede.

Blackpool were naturally buoyed by the goal and Mitchell attempted to increase the pain with a jink inside and curling left-foot shot that scuttled narrowly wide. Argyle responded with a speculative grasscutter from Grant that took a slight deflection before fizzing inches wide.

The afternoon took a turn for the worse just past the hour when referee Carl Brook awarded a slightly soft penalty for a push by Lewis on Mitchell, and Yates calmly planted the spot-kick into the corner.

Argyle looked to find some of their previous rhythm with a Mayor and Lewis combination leading to a cross headed out by Ollie Turton, but Maxwell claimed the set-piece with admirable assurance.

Byron Moore came on for Camara in the first Pilgrim change on 70 minutes and he soon picked up on a pass from Grant to deliver a near-post cross toward Hardie, which was well anticipated by Maxwell for the hosts.

A surge forward by right-back Jordan Gabriel almost led to a third for Blackpool but Aimson intervened with a brave challenge. The ball was recycled to Mitchell, with Aimson still hobbling from the initial block, and Cooper did well to save the shot across goal from the home right-winger.

Argyle entered the final ten minutes with increasing urgency in the search for an equaliser and the Seasiders called for reinforcements in the shape of Ethan Robson replacing Elliot Embleton.

Jephcott came on for Lewis in the closing stages and he was one of the targets from a Grant corner curled inward, but Maxwell was able to punch away the danger. Klaidi Lolos for Hardie was the next Argyle change.

The Greens had to dig deep and they did so in fabulous fashion, as a cross from Grant was met beautifully on the volley by Edwards for a wonderfully-controlled volley into the bottom corner.

It was a top-class finish and a goal more than worthy of earning Argyle the point their performance thoroughly warranted.