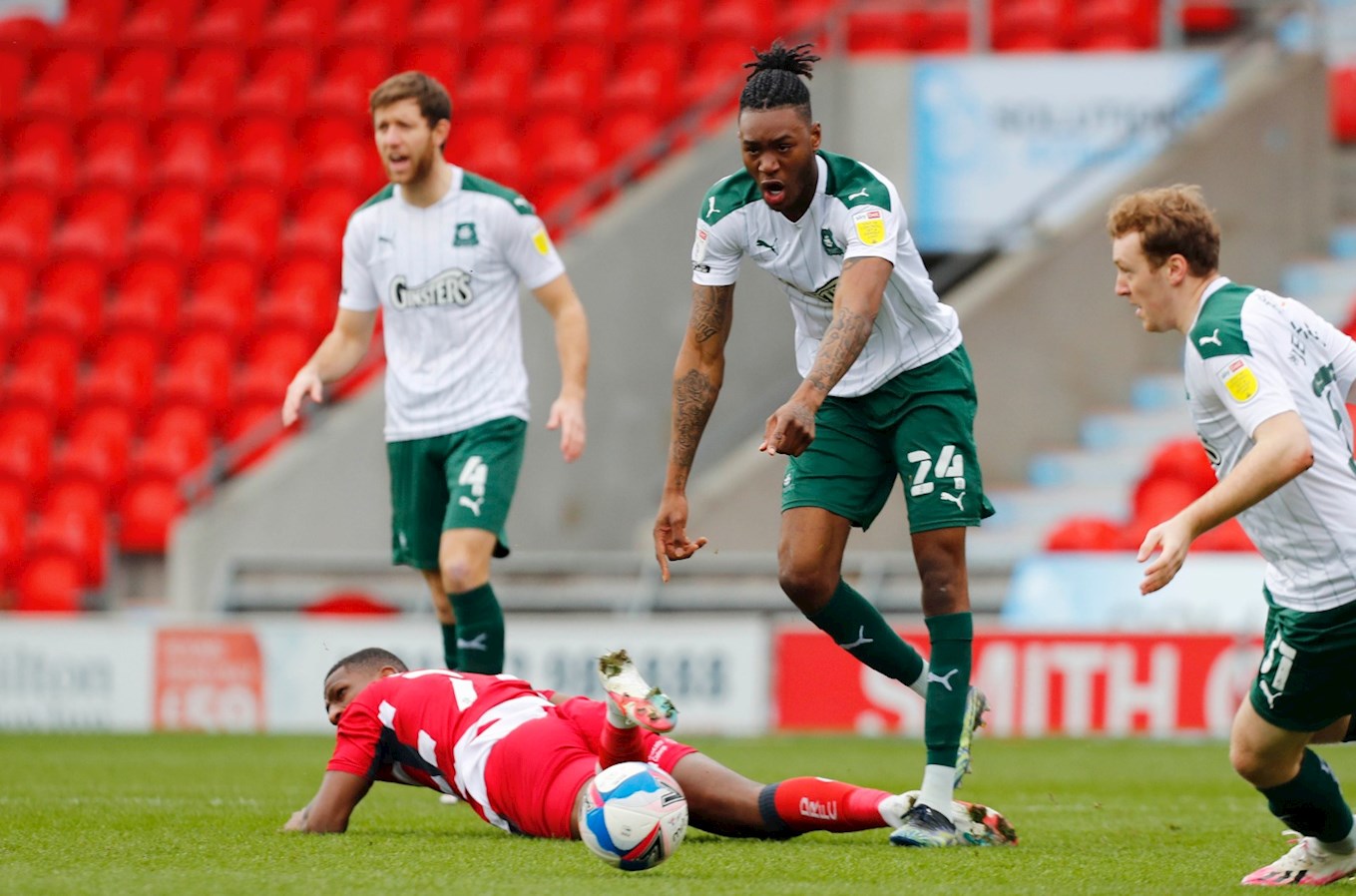 The Pilgrims have been involved in some fabulous games of football this season and the latest version at Doncaster Rovers only lacked the leveller Argyle’s tremendous play deserved.

The home side snatched an early lead through the head of Tom Anderson and it was just one chapter in a pulsating first half that somehow failed to produce another goal. Doncaster then doubled their lead through Omar Bogle immediately after the restart.

Argyle stirred back into life with a goal back from Nial Ennis two minutes later and the Greens were relentless in the pursuit of a point. Rovers, somehow, managed to survive, but credit to both teams for an afternoon of pure entertainment, despite the disappointing final result.

Argyle boss Ryan Lowe made four changes from the midweek defeat at Northampton, starting with fit-again Jerome Opoku replacing the suspended Sam Woods in defence, while Ennis came in for Ryan Hardie as Luke Jephcott’s strike-partner.

Conor Grant was restored to duties in the left wing-back role ahead of Adam Lewis and Ben Reeves was given the chance to impress in midfield, with Panutche Camara dropping down to the bench.

Donny manager Andy Butler made just the one switch from the team that beat Portsmouth 2-1 on Tuesday night, with Taylor Richards replacing Jon Taylor in midfield.

A fine start from the Pilgrims saw Grant and Danny Mayor combining well down the left, and a looping cross from the former found the head of Jephcott, who was just unable to turn the ball goalwards.

Argyle continued their bright work with some high-intensity pressing all over the pitch and Kelland Watts fed a pass into the feet of Ennis, who spun quickly and released Reeves in the left channel. The crafty midfielder attempted a reverse cross back to Ennis and goalkeeper Louis Jones was at full stretch in plucking the ball from the air.

Joe Edwards was next to surge forward after disrupting Doncaster possession and was, again, very close to picking out an intelligent run from Ennis. Rovers replied with a super strike from distance by Richards that required a top save from Mike Cooper.

The subsequent corner, unfortunately, presented the home side with the opening goal, as the cross directed to the near post was met by a stooping header from Anderson, which cannoned off the underside of the bar before nestling in the Argyle net.

Cooper ensured the damage was not doubled two minutes later, producing a terrific low save to again deny the lively Richards from distance. The Pilgrims came back with a Grant corner flicked on by Watts and Ennis was a fraction offside as he headed against the post.

An incredibly open game continued with the same theme and a run down the right from Brad Halliday led to a cutback for Josh Sims, who prodded the ball, thankfully, inches wide of the far post. Cooper then repelled Omar Bogle’s drilled effort from a tight angle.

Despite falling behind, Argyle remained confident in possession and another clever run from Ennis was perfect for Reeves to slip a neat return pass but the shot that was blocked by Anderson.

A slick move from Rovers came from a clipped pass wide by Bogle to James Coppinger, who laid the ball back into the path of Halliday for a searing drive that only just missed the target. Argyle replied with a drive from Reeves well charged down after a burst forward by Edwards.

Argyle then created a glorious opportunity on the half-hour, with Mayor jinking inside for a shot that took a huge deflection. Edwards read the situation perfectly to nip in front of Jones and the skipper’s first touch took him past the goalkeeper, but he was unable to manufacture his body to keep the final shot under the bar.

The Greens were playing some super football, this time foraging down the left to win a corner through Grant. The ball was worked back to Mayor for a fabulous deep cross that Anderson somehow glanced away from the deep run of Edwards.

Jephcott was next to pose a problem, pinching the ball from Bostock to win a free-kick in a dangerous position on the left. It was yet another inviting set-piece for the Greens and the cross from Reeves was brought down well by Opoku, but the Pilgrim defender was falling back as he scooped the shot over.

A dazzling run from Ennis won Argyle another promising free-kick and the inswinging delivery glanced off the head of Bostock, who was mighty relieved to see the ball swallowed up gratefully by Jones to complete an entertaining first period.

The Pilgrims emerged from the interval probably feeling very aggrieved their good work had not been rewarded by an equaliser, while Donny opted to remove the booked Bostock for Scott Robertson at half-time.

The second goal, however, was a source of great frustration for the Greens, as Bogle found plenty of space from a deep cross to head downward and past Cooper in the worst possible resumption for Argyle.

Mayor and Grant immediately sought to remedy the problem with a speedy break down the left. Doncaster initially forced the Greens back but the ball was recycled back to Grant for a floated cross that was met by Ennis cleverly steering a volley beyond Jones.

It was the perfect response from the Pilgrims and credit to Mayor and Grant for the injection of pace, and to Ennis for ensuring he was able to get across his marker and control the finish.

The non-stop action continued with a Coppinger shot well held by Cooper, quickly followed by another delightful deep cross from the lively Mayor and Edwards was unlucky to see his diving header at full stretch clear the home crossbar.

Mayor was beginning to enjoy his afternoon, dancing across the box in familiar fashion for a shot bravely charged down by the Donny defence. A brace of well-timed tackles from Will Aimson then snuffed out the hosts in a threatening position.

Back to Mayor, and his tremendous ability to create room for a shot was again on the menu, with a drilled low shot deflected wide by Joe Wright. Mayor next threaded a pass down the line for Jephcott to switch it back to Grant, who saw his curling effort only half-saved by Jones, as Rovers desperately cleared the loose ball.

Step forward Edwards for the next Pilgrim break and a low cross aimed at Mayor and Jephcott led to a slightly scuffed shot that bobbled agonisingly wide of the near post. It was more outstanding play from the Greens and Doncaster were clinging on to their lead.

In similar fashion to the Lincoln epic last weekend, Rovers conjured up a chance of their own with a lovely pass from Coppinger to Richards, but Cooper was off his line in a flash to make a superb block.

The unbelievable energy of Edwards soon had Argyle racing forward again and the captain threaded a pass to Jephcott, who attempted to round Jones but credit to the Donny custodian for reading his intentions to make a good save with his feet.

The Pilgrims were relentless in their work-rate, with Tyrese Fornah often the catalyst for attacking breaks with his diligent graft in midfield. The youngster decided it was graft that warranted a rare effort on goal but the long-range drive was narrowly off target.

Back to Grant and Mayor, working the ball inside from the left for yet another stinging effort by the Argyle number 10 blocked by Anderson. Grant next reversed a super pass into the path of Watts for a half-volley steered inches wide.

It was a magical stuff from the Greens and fresh troops were introduced to support the cause, with Reeves, Fornah and Grant withdrawn for Lewis, Camara and Lewis Macleod. Doncaster, meanwhile, withdrew Coppinger for Jason Lokilo, and the new man was soon probing around the box for an attack concluded by a Bogle shot on the turn that slipped wide.

Lewis made his first impression on the left for Argyle with a superb early cross toward Ennis, who headed a fraction over. A chipped cross from Mayor was then headed past the post by Jephcott.

Lowe played his final hand for the closing ten minutes of a cracking game, bringing on Hardie and Byron Moore for Jephcott and Edwards, although clever work from Sims released Richards for a shot dragged wide, as Rovers showed they remained a threat at the other end.

Richards was then replaced, alongside Matt Smith, for Madger Gomes and Cameron John, as the hosts looked to add extra defensive cover for the final few minutes. Gomes did have a chance to actually extend the lead but he was thwarted by an extraordinary goal-saving recovery tackle from Aimson.

Camara restored the Argyle ascendancy with lovely skill in the engine room and a pass wide to Mayor for a cross cleared on the stretch by the excellent Anderson. Opoku rose highest from the corner but the header bounced wide.

The Greens pushed until the end and will hope for a lot more luck when Wigan visit Home Park on Tuesday night.